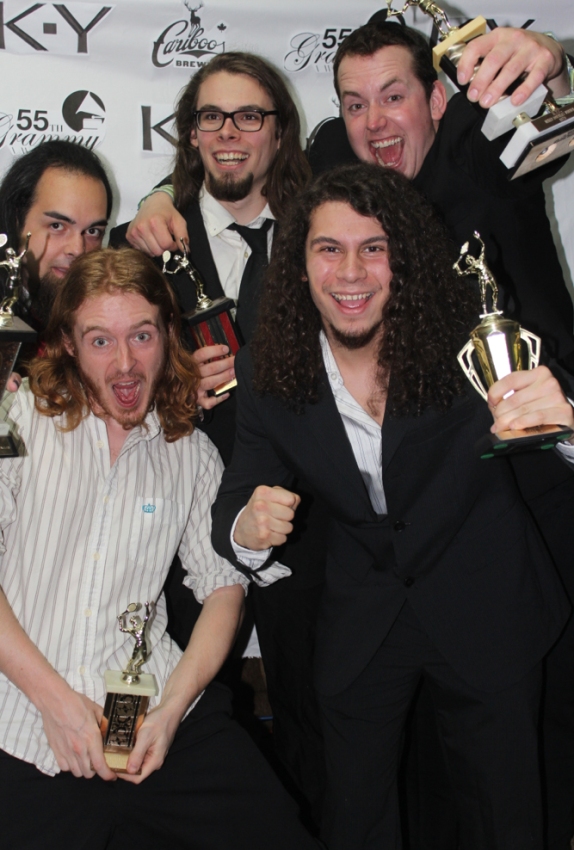 With rich flavour to every unpredictable twist and imaginative exploit within feverishly inventive designs, Just The Tip, the debut album from Canadian band Expain, is one ruggedly captivating proposition. As evidenced by the release, Expain cast a sound which is a mouthwatering web of thrash cultured melodic death metal infused with everything from jazz to progressive metal. It makes for a gripping and compelling capture of the imagination though for the moment the band falls slightly short of igniting a lustful blaze of passion for its persuasion, especially when placed against recent releases from the likes of Destrage, Hardcore Anal Hydrogen, and Toumaï. Nevertheless band and album are fuelled by a potential and technical craft which simply bewitches and ensures Expain is smack bang in the middle of attention’s radar.

Hailing from Vancouver, the band has earned a strong reputation back home for their melodic ingenuity within that virulently aggressive thrash bred voracity, a blend bursting across every second of Expain’s first merciless onslaught. Their full-length actually follows an EP released under the name The Almighty Excruciating Pain in 2012, the seeds to the impressive incitement of Just The Tip. Produced by Matthew Roach, the release is a potent starting block for a suspected highly promising and fruitful horizon for the five-piece.

The instrumental Bacchus opens up the creative adventure, its melodic colour and enticing within a subdued but evident snarl a hint of 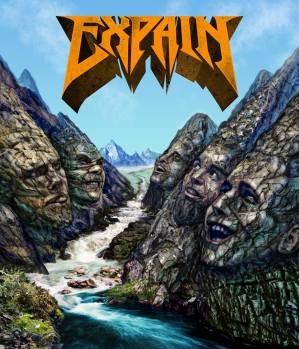 what is to come, a suggestion swiftly unleashed with the following Aggressions Progression. From its opening firm rhythmic framing around progressive hues and sonic enterprise, the song has ears and thoughts fascinated. The coarse vocal squalls of Daniel Brand entwine their venomous yet welcoming hues amongst the spellbinding weave of guitar play from Pat Peeve and Eric Morrison, a captivating emprise matched by the throaty string craft of bassist Nikko Whitworth. The track is a mighty full opening, showing everything you need and wish to know about the band’s intent and ingenuity of songwriting and performance. It is a constant evolution of ideation and at times mischievous unpredictability which is emulated almost as scintillatingly in the next up Phoenix Writhing. The core charge of thrash inspire riffery and rhythmic antagonism is a powerful bait around which guitar imagination steals the show, though its shares the honours ultimately as a jazzy breather allows the bass to be just as spellbinding.

Both tracks irresistibly impress as does The King which comes in straight after upon an elegant cast of melodies before the irrepressible rhythms of drummer Ryan Idris lead the senses into a sinewed sculpted blaze of acidic short grooves and barbed persuasion. The song slips from its exciting opening into a more expectations feeding thrust but still provides a network of inventive twists and melodic metal flaming to stir up attention and appetite. It is a strong and extremely pleasing track yet lacks the spark of its predecessors as does Don’t Worry The Worst Is Yet To Come. Again the individual invention and skill is breath-taking whilst the small turns and imagination foraging tenacity of guitars and bass are enslaving but it is the thrash spine which offers little new to chew over and lessens the impact of the songs.

The singular attack of the vocals is another element in which more variation is wished, to join the diverse creativity colouring songs, though admittedly Brand is excellent in his delivery and passionate provocation. It does mean though that at times he loses out to the sparkling and potent endeavour elsewhere, as shown with the excellent Idol Worship where guitars seize attention resourcefully supported by great bass and drum incitement. The track and its successor Allegiance To Pain also avoid providing something which is equally never offered by songs and album, and that is to really explore an avant-garde territory which certainly the second of this pair does pleasingly hints at. Song and release does flirt with that bold diversity and adventure across its impressive body but never quite goes into the heart of inventive ‘mania’ which those bands previously mentioned embrace. It is still one of the pinnacles of the album though and gives another reason to suspect that the band is going to become a big force.

Both the seductively prowling Manatee and the predacious Headbang Your Head Off keep ears and emotions employed, the first a blackened waltz of melodic revelry and rhythmic barracking whilst the second is a torrent of disorientating beats and dazzling sonic lures which never standstill or allow a breath to be taken. Vocally too the song sees Brand at his strongest and most gripping, if again diversity is scare whilst the bass of Whitworth shows its presence to be potently inspiring within the thicker mesh of beats and grooved invention.

Completed by A.T.M. with its spicy acidic veining and the contagiously rapacious Eating A Beating Heart, the album leaves a lingering and contented hunger entrenched in thoughts and emotions. Some of the songs certainly need close attention to separate them within the context of the album but singularly all present a magnetic and riveting evocation of sound and craft. Just The Tip is an easy recommendation with plenty for fans of everyone from Megadeth to Municipal Waste, Revoker to Death, as well as those more experimental propositions previously talked of to be excited by. Expain will be a major thrill in our ears and using the reasoning of their great debut, it is expected to be sooner rather than later.

The self-released Just The Tip is available now @ https://expainband.bandcamp.com/album/just-the-tip