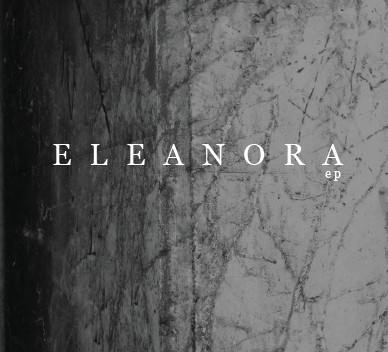 Fresh from their impressive appearance on a 10” vinyl split with Amenra this past April, Belgium quintet Eleanora unleash their own provocation simply called EP. Comprising two of the fiercest, sonically disabling, passion drenched incitements possible, the release reinforces an already feisty buzz around the band whilst unleashing another healthily gripping onslaught of their emerging might. It is raw and uncompromising, a voracious intrusion from the Ghent band’s inspiring recipe crafted from intensive sludge and hostile hardcore, and though not the easiest of listens undoubtedly an experience which leaves an invigorating impression.

Consisting of Mathieu Joyeux, Jeroen De Coster, Christophe De Ridder, Stijn Witdouck, and Robin Broché, Eleanora boils up a rage which has plenty to satisfy the wants of fans to the likes of the aforementioned Amenra and Amera through to others such as Converge, Botch, and Isis. Fifteen maelstrom driven minutes across two tracks, their release is prime lyrical and sonic causticity starting with the outstanding Mammon. From within a sonic veil which intensifies with swift hunger, guitars and vocals roar to score ears and graze senses. It is a brutal entrance driven by fearsomely antagonistic rhythms and quickly established acidic grooves which inflame the imagination and emotions. It is a tempestuous enticement but one with virulence pouring from every aspect of its bait, riffs and vocals a scourge upon the senses and the evocative grooving an ungracious but compelling seducing. As expected venom and bile oozes from the provocation, indeed flowing profusely from the vitriolic vocal squalls as syllables and raw passion burn with every outpouring. It is the hooks and grooves though which set the track apart, their similarly malicious intent and potency a tempering and psyche colouring temptation to the sonic and rhythmic violence. It is a tremendous fury and almost alone makes Eleanor a protagonist destined to be under eager scrutiny.

The second song on the release is Amenable, an equally bruising and breath-quenching assault. Its abrasing start flickers with sonic flames and portentous rhythms smothered in the heavy dark tones of bass. It makes for a dramatic and thickly emotive introduction which permeates ears and pores with a doom bred, sludge fuelled oppressiveness. Though not as enslaving and addictively attractive as its predecessor, the track instantly captivates the imagination and provides a torturous canvas for its ideation and invention to colour. A nagging repetitious crawl emerges early on too, its immoveable persistence adding to the tenacious enmity soaking every note and scathing vocal sprawl smothering the listener. Funereal in gait and ravenous in intent, the track is a masterful hypnotic persuasion, a pestilential predator bringing the EP to an impressive conclusion.

The release is sure to bring a new impetus and hunger to the acclaim already gathering around Eleanora and take the band into a sharper focused spotlight. It is early days but easy to predict that this is a band set to bring a new fire and appetite to [post] hardcore inspired intensive sludge rock/metal.

The Eleanora EP is available via Consouling Sounds and @ http://eleanoramusic.bandcamp.com/album/ep