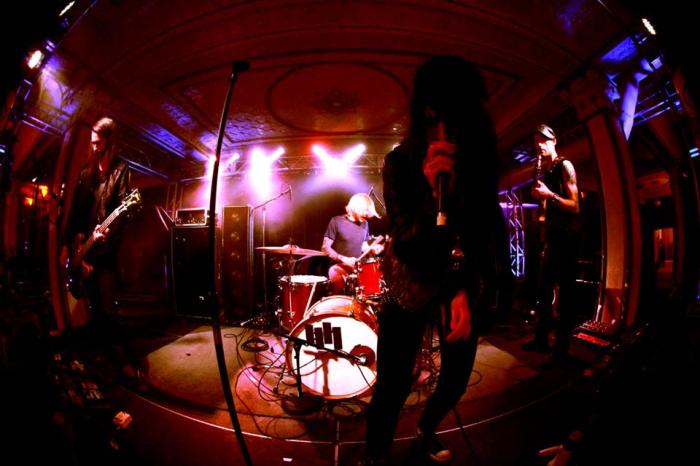 Providing two tracks which would soundtrack any occultist or pagan ritualistic dance with a toxicity even the exponents of those dark arts would fear, Indianapolis quartet We Are Hex unleash their new 7” single W.D.M.R.S./Tongues. The release is a glorious ravaging of the psyche and calling of the primal predator in us all, and one of the most virulently addictive and seductive releases in a long time.

We Are Hex has never been slow in ripping up the rulebook and infiltrating the senses with an infestation of their sonic irreverence and rhythmic antagonism, as shown by the likes of Gloom Bloom (2009), Hail The Goer (2010), and the Jon Spencer produced single Lewd Nudie Animals / Real Waco Lot Lizard of last year; just three of their uncompromising manipulative adventures. The band creates a gothic drenched death rock which just seems to get darker and thicker in its causticity and brilliance, but the new pair of songs has found a depth and plateau which leaves everything before it in varying degrees of shade. Both tracks are simple glorious, rapacious stalking of senses and emotions which leave the longest lingering and most deeply entrenched alchemy from the band yet. Ahead of a new full-length and continuing the striking legacy of their 7” unleashes, which includes the Jack White recorded Twist the Witch’s Titty, the new single is pure salacious joy and the reason the devil loves rock music.

W.D.M.R.S leads the persuasion, emerging from a sinister sonic mist of intrigue and menace as a portentous declaration marks our

cards. Named after sixties band Coven’s Witchcraft Destroys Minds and Reaps Souls, and featuring the guest tones of Jinx Dawson from the band, the song entangles ears and senses in a web of guitar temptation aligned to calls of torturous souls. It is intimidating bait which the rich throaty voice of the bass and a percussive flirting only accentuates before the body of the song leaps from the tempest to immediately grip the passions. Rhythms unleash their heaviest thumping suasion right then too as guitars entwine and score ears with minimalistic but resourcefully precise melodic toxicity. It is a gorgeous swamp of sound, a Siouxsie Sioux element touching the vocals of Jill whilst moonshine like whiffs of The Slits soaks beats and their imposing agitation. The song transports the imagination into the heart of sultry satanic scenery, a sonic clawing and rhythm driven hypnotism inescapable bonds holding thoughts and emotions, not forgetting swiftly ardour wrapped passions tight. With seventies bred garage pop and psychedelic whispers also adding their coating to the recipe, the song is pure aural venom and quite delicious.

Its success and immense seduction is swiftly thrown up another level or three with Tongues, the track two minutes of addiction causing ingenuity driven by rhythmic irritation and sonic nagging. It is simply brilliant, a carnivorous tsunami of tenacious melodic scorching and sonic animosity strapped to a rhythmic hostility and persistence which draws the deepest insatiable lust in return for its rampant enticement. Imagine Alien Sex Fiend and the Sex Gang Children in an illicit union with Stolen Babies and Morning Wood and you get an idea of the sheer ingenuity and virulent compulsion that is Tongues. Arguably the best song heard this year and last, it is a musical bitch with all the charm and voracity of a rabid burlesque dancer, something which applies to the sound of We Are Hex full stop really.

Sometimes you come across a band which consistently sculpts templates for others which in turn subsequently breed new depths of subservient allegiance towards them; We Are Hex is one of the most masterful and deviously riveting bands and if you have doubts we give the W.D.M.R.S/Tongues 7” as our proof and recommendation to go be infected.