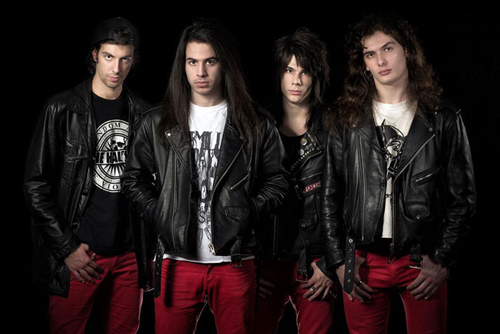 2014 has already been flush with some impressive and more importantly thrilling thrash metal releases, some old school bred and others sculpting the new penchant for fusing thrash with death metal and other styles. Somewhere in between comes Embracing Oblivion, the exhilarating new rampage from Greek metallers Chronosphere. With adrenaline driving relentless through every vein making up the ten-track avalanche of insatiable thrash baited ferocity, the album is an exhausting and exciting confirmation of a promise already laid from the band previously but now aligned to a new plateau of inventive hostility and mouth-watering creative tenacity. Arguably the release is not casting explosively original persuasions but with ease Embracing Oblivion stands to the forth of the emerging modern twist of Bay Area spawned thrash metal.

The beginnings of Chronosphere started in 2009 when vocalist/guitarist Spyros Lafias formed the old school thrash fuelled Homo Sapiens. The demo Hypnosis came out the following year as well as several line-up changes which subsequently led to the union of guitarist Panos Tsampras, bassist Kostas Spades, and drummer Thanos Krommidas alongside Lafias. The band’s reputation has grown constantly through their live performances which over the years has seen them share stages with the likes of Rotting Christ, Suicidal Angels, and Evile as well as various festival appearances such as Metaldays and Wacken Open Air. 2011 saw the band begin working on their debut album Envirusment, an attention grabber which was released as Chronosphere via Athens Thrash Attack in 2012. Acclaimed and drawing world-wide attention its success is now set to be left behind in the wake of Embracing Oblivion and its explosive might.

The concussive entrance of Killing My Sins awakens attention and appetite within seconds, guitars and rhythms cascading venomously

down on the senses before settling into the casting of predatory riffing and antagonistic beats. It is a dramatic and gripping torrent of intent and sound driven forcibly by the excellent vocals of Lafias supported anthemically by the shouts of Spades and Tsampras. The song is a ravaging onslaught but also a tempest which has the guile and deception to slip into moments of stalking rapaciousness and respectful intimidation, though it is only to un-cage a scorching solo before reasserting that savage and exalting furnace of intent and aggression.

The exceptional start is swiftly matched by One Hand Red Per Saint, again an insurgent proposition from its first breath. Riffs consume ears with an edacious hunger and rhythms unleash a cage of battering animosity, both expected in many ways and pleasingly welcomed but it is the inventive twists and imagination deviation to the core formula which ignites the passions most impressively, those and the ever successful vocals. Already within two songs there is an unpredictability infused into the assumption feeding base charge of the encounters which sets the band apart from the masses and flirts wantonly with the imagination for a full and eager submission, the next up Force Fed Truth equally as effective and ingenious in its presentation. It all makes for a familiar and refreshingly new twin attack from the album, one which simply does not fail in winning an ardour wrapped reaction.

The third song is debatably more expectations feeding than its predecessors but still a thoroughly electrifying provocation before making way for the merciless temptation of Brutal Decay. With a great vocal deviation to its narrative at times and a new intensity of urgency and energy beneath the spiralling casting of guitar and their sonic endeavour, the track is a galvanic onslaught which is anthemic in its recognisable seeds and dramatic enticement but littered with shards of often brief but scintillating invention. The guitar prowess once more lights a blaze of impressed appreciation whilst drums and bass continue to inspire a new strain of hunger for their enterprising voracity.

Things step up another notch with the intoxicating Frenzied From Inside, Lafias and guitars weaving further rousing ideation and breath-taking toxicity into its wonderfully hellacious rampage, whilst the next up Herald the Uprising instantly has the passions eating out of its hands with the opening rough carnivorous bassline, bait impossible not to get carried away over. It leads the ears into a furious pleasure of bad-blood veined enterprise and virulent anthemic beauty, the vocals as magnetic as the flesh chewing riffs and citric touch of the razor sharp cuts from the tantalising guitars. It is an enslaving enticement as potently matched by the scything rhythms and the persistently masterful bass sound, not forgetting one fire soaked solo.

The album continues to inspire hungrier and greedier responses as City of the Living Dead backed immediately by Seize Your Last Chance hold ears and imagination spellbound, the first a haunting and sinister examination which simply engulfs the listener in caustic sirenesque predation and its successor a more concentrated preying of the psyche. One very happy to un-cage an epidemic soaking of barbarous rhythms and similarly inhospitable riffs wrapped in a bewitching grooves expelling exceptionally addictive sonic invention.

The album comes to a close with the bestial brutality and muscular beauty of Beyond Nemesis, a thunderous pugnacious treat of an antagonist, and the melodic metal spawned blaze of craft and ferocity that is The Redemption. Both songs again expel an invention and creative adventure which leaves anticipation for more in the future as full as the satisfaction and pleasure embraced. There are a couple of minor moans which could be placed before Embracing Oblivion, well one really which is the similarity of many tracks across their strong surface which requires extra attention to look through, but that focus is rewarded with that gripping invention and devilry so really it is just an observation which probably will work itself out as the band evolves organically. Chronosphere is another band taking modern thrash to new heights without losing its source and providing impressive highlights in a busy year for the genre.