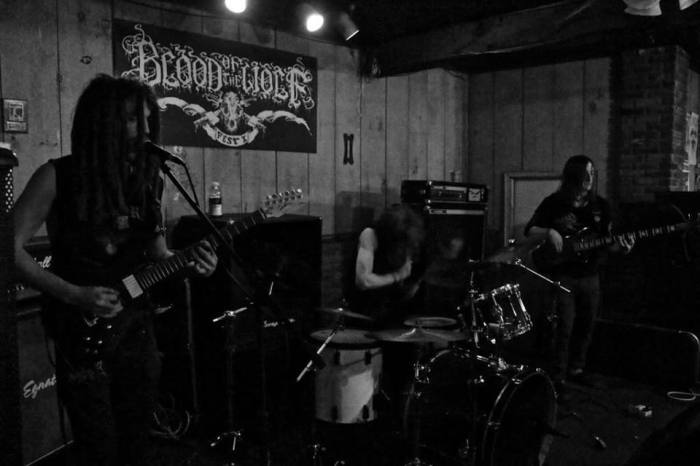 There are two sides to Beyond the Forest, the debut album from US black metallers Valdrin; one a flowing landscape of poetic imagination basking in colossal emotive melodies and enveloping atmospheres and the other a pestilential savaging infesting senses and thoughts. Both are irrepressibly compelling and entwined into a masterful captivation of ruinous intent. Brewing an enthralling toxin of black metal with twists of thrash and death metal bred voracity, Valdrin is an attention grabbing and exciting new protagonist, and their album a demanding and intensive experience which makes you work for its rewards but offers them impressively.

Hailing from Cincinnati, the trio of Carter Hicks (guitar/synth guitar/vocals), James Lewis (bass), and Ryan Maurmeier (drums) have drawn comparisons to the likes of Emperor, Bathory, and Dissection with their uncompromisingly creative scourges masquerading as songs. Their music is not just ravages of the senses though as the trio’s ability to cast weaves of orchestral and intimate beauty woven with riveting melodic design within angrily tempestuous climates and assaults is bewitching. As mentioned it is not an easy accessibility offered by band and album but one which fills and ignites every spark of a synapse, thought, and emotion.

Beyond the Forest emerges through instrumental A Drain in the River, it a heavily portentous and disturbing scenery of dark menace

and emotional suffocation leading into a world of danger and tormented souls. The journey of the album is menacingly afoot and soon thrust into the malicious jaws of the title track. Riffs and rhythms rampage with a pack like rabidity from its first breath, never reining in its voracity even as insidiously serpentine vocals and warped sonic grooves spread out from within the maelstrom. The track is a savage aggressor but one with sleek invention and sonic poise to not temper the hostility but certainly shed a magnetic light over its violence. The narrative of the ten minute adventure is venomously expressed by the acidic vocals, their presence another aspect to acclimatise to but embraced heartily before the track is in its final throes of animosity. With a terrain which is persistently evolving and shifting the band immediately shows the depth and invention to their songwriting and imagination. With classical guitar and melodic reflection as absorbing as the ferocity burning elsewhere, Beyond the Forest is a masterful and gripping continuation of the entrance into the heart of the album.

The individual skills of the band is a constant open source of pleasure, the following Rusalka Succubus right away continuing the almost progressive flair each member explores within the vicious turbulence and spiteful malevolence bursting from each track. Again the song is an intensive oppression on the senses at its core, a thick abrasion which alone would be hard to penetrate or arguably endure; it is scored and laced with irresistible melodic grandeur and ingenuity though which simply seduces ears through to emotions as a ghostly elegance calls with sirenesque persistence from within the beauty.

Serpent Willow launches at the senses next with a flailing barrage of rhythms and ravenous riffs, a thrash seeded bitterness driving the thrust of the song. It is a tremendous violation of ears, a savage bestial ferocity which digs deep and long with its rabid hooks and insatiable grooves before making way for Impaled Visions Breed Within the Vines. This is another track where the thrash instincts of its primal intent steers the rage but where its predecessor is single minded in its attack, this thick wind of sound and emotion breathes with a celestial grace and melodic appetite within a rapacious animus. As with most tracks the song needs time to unveil all of its dark crevices and evocative structures but the bait right away is merciless and an ever increasing lure as the track reveals its glory.

Both Calling to the Canidae Hordes with its refreshing but malicious flume of bad blood around a spellbinding enticement from the guitars and the epic flight of Through the Catacombs enslave attention and imagination next. The first is a galloping call to arms, an almost festive swagger and glee to its web of sonic endeavour shining from within an open rancor whilst the second of the two songs is similarly buoyant in its suasion but darker and more intimidating in its shadows and clawing rhythmic nagging. As with all breath-taking melodic sculpting and evocation brought by Hicks it comes under an exacting examination of not only drums and bass but his vocal enmity, but always succeeds in making an impacting persuasion. It is a masterful mixing by the band under a great production which whilst clouding and accelerating the dark cavernous pressure of songs allows clarity for the caressing intricacies and inciting melodies of songs. The brilliant and exhausting race against time fuelled torrent of riffs and rhythms at the tracks climax is mouthwatering, igniting a greedy appetite for the demonic beckoning and pillaging of the senses from Come Forth. Thrash riffs and tenacity again infiltrates and swamps the passions, the track a blistering and scintillating onslaught with thrilling guitar toxicity.

Through the nefarious yet enchanting call of Darkness as Black as Evil and the infernal climate of Battles in the Medieval Sky, band and album cast new and constantly twisting provocations whilst an expansive submergence into In the Vortex of Time / Relinquish Flesh is as breath-taking as it is disorientating, the heart of the blackest soul wrapping its damned elegance tightly around the senses. As all songs on the release, the tracks are never a clear or straight forward picture as inspired ideation and creative bravery contrasts and complements the heart of songs.

Closing with the impressive drama and rich melodic colour of Forgotten Souls and its final dark invasive premise, Beyond the Forest is a fascinating and richly exciting introduction to Valdrin. Do not expect to understand and discover everything about the band and what they have to offer quickly or easily but that just makes their album a long-term investment for the imagination and passions. Valdrin has the potential to be very special; they are half way there already with their deeply striking debut.

Beyond the Forest is available through Blasthead Records now @ http://blastheadrecords.bandcamp.com/album/beyond-the-forest