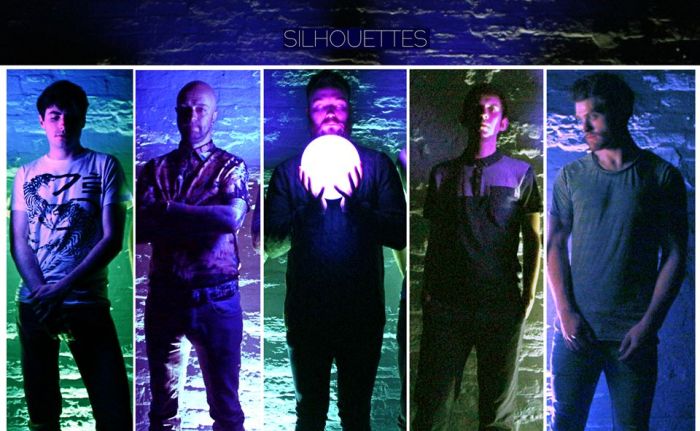 Silhouettes last single Gold Tag offered a sizeable hint and thrilling teaser for the UK indie/electro band’s debut album, a taster which itself has continued to grow and impress since our coverage of its charms. Now that Ever Moving Happiness Machines has arrived all anticipations and expectations of the release have been fed and fully satisfied. The ten track encounter is an intriguing and inspiring slice of creative diversity and poetic imagination, a proposition which ignites the senses and thoughts in a richly varied and at times challenging way for an enthralling incitement which never leaves a moment devoid of emotive provocation or absent from riveting drama.

Hailing from Wolverhampton and formed in 2008, Silhouettes has earned themselves a sizeable reputation for their sound and live performances, a presence more than complemented by a couple of EPs. It was Gold Tag though which has arguably been the spark to a greater spotlight, its more electronic seeded presence a fascinating and tantalising evolution in the band’s sound. Created by Nathan Till (vocals, guitars), Jay Cuthill (guitars, keyboards, drums), and Ben Blewitt (keyboards), Ever Moving Happiness Machines has the potential and certainly the invention to push the band to the next level, and with a line-up completed by Xander Roberts (bass, vocals) and Ben Dargue (drums) live, Silhouettes is poised to take intensely emotive electronic music by storm. 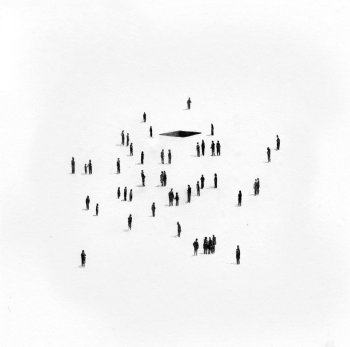 Tag it is an unrelenting feast of striking enterprise and emotional exploration which has ears and imagination hungry for the album’s impressive offerings. The first track immediately unveils an eighties influence, a flavouring which occurs throughout the album, as small but vivacious guitar crafted melodies entice the ears. As they find themselves joined by a magnificent and robustly throaty bassline there is a strong essence of The Farmers Boys at play, a spice which takes on a definite Orange Juice tang as keys and the great vocals of Till add to the exotically vibrant picture. The song strolls with a masterful confidence which in turn recruits a bold reaction from feet and emotions, its crystalline key sculpted melodies and expressive harmonies a seductive glaze to the contagious waltz. It is a glorious entrance which in its fullest form has appetite and imagination aflame especially through its ridiculously addictive rhythmic closing stretch.

From the lively enticement the album glides into the glistening evocative embrace of Creaking Universe. Its initial lure sparkles like sonic crystal, the keys erupting like dust in a shaft of light before a melancholic shadow and croon clouds over ears to tempt them with its darker touch vocally and musically. Slipping into a seductive breeze which soothes the ears and intrigues emotions, the song from a decent beginning becomes a potent magnet, its ever increasing pull through string orchestrated melodies and brooding textures masterful. Imagine The National meets the Walker Brothers and you have an idea of the voice and might of the track.

The next up Sacrifice is another track which needs time to grow but does so with immense success. It opens with a celestial blaze of electronic persuasion, an Orchestral Manoeuvres in the Dark like wind hugging the senses before the falsetto charm of the vocals lie romantically upon the ears. First impressions are strong and rewarding but as with quite a few tracks on the album, it is one which deviously works away leaving a haunting toxin which repeats time and time again, to return at any moment unannounced. The exciting track is instantly emulated by Cold Water/Grey Flesh, its chillier climate and singular expression a bewitching temptation which again is strong at first but masterful over time. With the keys casting an almost intrusive web which the guitars and vocals unveil colourful and poignant hues over, the song dances elegantly seeping a stark breath of lost hope and scenery. It is a highly evocative narrative which could be described as Joy Division meets Sigur Ros.

The intensive melancholy of I Miss You, I Want You, I Need You, I Love You carries a rich Radiohead vein to its despondent emotion and cold breath. It is an impressively crafted and presented piece of music and emotion but for personal demands fails to strike the flame other songs on the release do so easily, though the flume of strings create a resonating tempting for the imagination to immerse within. It is not a low point but one personal taste cannot connect with, something the brilliant Prufrock’s Dream has no trouble achieving. The new single from band and album is an enthralling adventure of sound and imagination. Written as the sequel to the TS Eliot poem The Love Song of J Alfred Prufrock, the song teases ears with a sultry guitar weave at first before expanding into an exotically rhythmic and mystique soaked flame of sonic and melodic seduction. The guitars continue to bind the senses in a psychedelic glaze of Eastern promise and thought inciting majesty whilst the voice of Till croons with potent expression and absorbing texture. As it persistently flirts with ears and emotions entwining radiance and shadows, whispers of the likes of Teardrop Explodes, The Verve, and Nick Cave make their presence known in a song which is scintillatingly original and unique to Silhouettes.

Both Scuff Marks and Ferry Me Away slip in the wake of their glorious predecessor, though again it is primarily down to preferences. The first has a pulsating core and evocative ambience which increases potently over the length of the song for an enveloping climax, but again with a Radiohead similar breath it fails to spark any real reaction, though Silhouettes is a much more exciting proposition to be fair. Its successor also carries that Thom Yorke and co breeding but evolves into an emotionally infectious play with melodic toxins which seduce with wanton ease and a folk bred gentleness which elevates it to a stronger footing. Neither are songs to pass over swiftly but possibly suffer being stuck between the triumphs of Prufrock’s Dream and the outstanding Black Within The Black, a track unafraid to show its roots in the early days of The Cure. With the bass rapturous bait and rhythms pure anthemic lure, the track is an unbridled temptress to which Till brings his own style of haunted tones and expression for exceptional success. The song invades and seduces every pore and thought to provide another heady pinnacle.

Closing with the climactic Boys, a track from small melodic and expressive seeds grows into an epically shaped tower of intense emotion and powerfully evocative colour, Ever Moving Happiness Machines is a gripping adventure which provides a kaleidoscope of invention and imagination, not forgetting creative passion. It is not an album which quite succeeds with every chapter, but is a radiant success across its whole body as Silhouettes more than delivers on their original promise.

Ever Moving Happiness Machines is available via Integrity Records now!