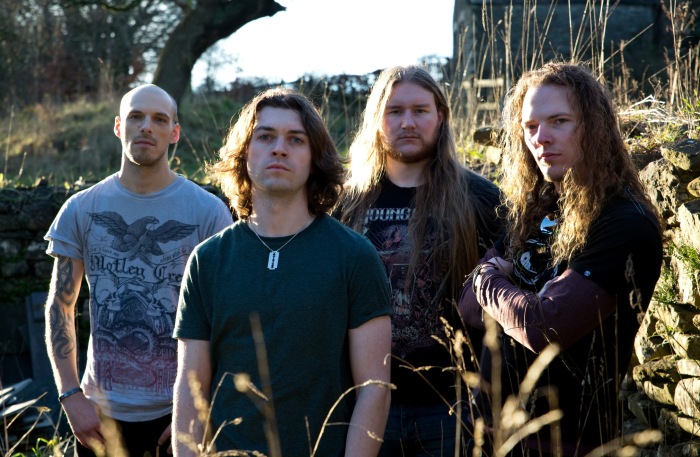 It is fair to say that UK metallers Second Rate Angels have bred a rather decent reputation for themselves through their highly flavoursome sound and explosive live performances since forming in late 2011. Now the Hemel Hempstead quartet looks to emulate their success and presence on a nationwide level with debut EP The Lost Days. Consisting of four skilfully contagious and vivaciously inventive tracks which capture the imagination with ease, the release is a striking and potent introduction to a band drenched in rigorous promise and open quality. Their sound on the evidence of the EP is not one to stretch boundaries within melodic metal and heavy rock but certainly it is a fresh and riveting new strain to an established design.

Since forming Second Rate Angels has sculpted an impressive presence on stage, playing with the likes of Breed 77, Beholder, and Zico Chain to name just three along the way. Their appearances at Bloodstock Open Air Festival equally brought a new wealth of attention and support the way of the band and their Avenged Sevenfold, Bullet For My Valentine, and Trivium inspired muscular ideation. The Lost Days EP is the next step of their ascent and you cannot avoid thinking set to be very successful in its intent.

Give It A Name opens up ears and attention with heavyweight rhythms across expansive sways of sonic rapaciousness, its entrance

deliberately predatory yet insatiably compelling, especially with the scythes of guitar sculpted temptation. Once seducing the senses and anticipation fully, the track shifts into a fiery charge of heavy metal riffs punctured by sinew built rhythms, it all driven by the excellent tones of vocalist and bassist Dave Gobran. With a sandy rasp to his impressive voice, Gobran is an immediate lure around which the guitars of Chris Lewis and Matt Clark just as dynamically and impressively entwine their creative exploits. The song itself is a stirring encounter which is unafraid to venture into emotive melodic climates where gait and energy make a gentle canvas for the intensive expression of vocals and sonic hues.

The excellent start is soon reinforced by the following Dragged Out, the new single from the band. A lone guitar coaxes ears first before the pungent beats of drummer Andy Doran strikingly frame and spear the enticement as Gobran again colours the scenery with his voice. Once established the song explores an Avenged Sevenfold like melodic pattern of colour and imagination aligned to heavy rock rapaciousness which is as familiar and inviting as it is individually inventive. It is a less demanding and commanding song than its predecessor but potently catchy alongside being creatively absorbing.

The release is at its strongest over the final two songs, the title track an outstanding suasion which hints at a depth of potential still to be discovered by the band whilst providing an incendiary drama and skilled enterprise which sets them out as a thrilling proposition now and ahead. With great variation to the vocals and the predatory breath of the song, it is a riveting adventure which at times has an essence of John Bush era Anthrax to its hunger and endeavour around thought provoking hooks. The guitars and drums as already expected by this point make for an impressive and expressive incitement whilst the vocals of Gobran flame in passion and expression, and his bass craft is pretty formidable too.

Black Ice is more seeded in classic metal, though again eager to explore and colour itself with varied spices and tenacity of various metallic styles. It is a contagion drenched song which seduces with a chorus that refuses to be ignored or forgotten whilst around the anthemic bait band and song cast a scintillating weave which is as unpredictable and intriguing as it is virulently enslaving. It is an outstanding end to an excellent release which easily suggests that we just might have a new powerful force in British melodic metal in the making. If the thought of The Wildhearts meets Bullet For My Valentine appeals then checking out Second Rate Angels is a must.

The Lost Days EP is available from Monday June 2nd through all digital stores.