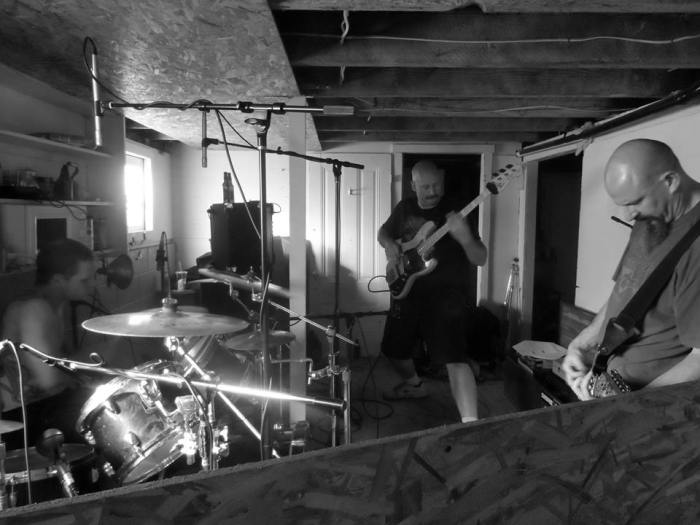 The fact that Violation Wound is the brainchild of Chris Reifert, a musician who has been a major genre shaping instigator through Death, Abscess, and Autopsy alone, is enough to make his new proposition a must investigation. The fact that it and its self-titled debut album is a rigorously exciting and enjoyable fury is an extra unbridled bonus.

Violation Wound is Reifert creating a dirty uncompromising brawl of punk rock and metal with hardcore ferocity, a sound and release which finds its seeds in old school punk/HC whilst forging its own distinctive voice. It is not a sound which rips up templates but certainly one which makes Violation Wound a fresh and viciously attention grabbing prospect. Reifert formed the band in 2013, the response to an ‘itch’ to play traditional pissed off punk rock. Moving from his usual position behind the drums to guitar and vocals, he enlisted friend and ex- Fog of War bassist Joe Orterry and current Fog of War drummer Matt O’Connell into the idea and band. The trio set to work creating and uncaging their punk ferocity which is perfectly caged within the album. Also featuring guest appearances from Autopsy guitarists Danny Coralles and Eric Cutler, the release like its sound is as raw and honest as it comes. The production is minimal in many ways and also as raw as it comes, allowing the heart, passion, and hostility to songs to breathe without restraint. The album plays like a collection of tracks brought together from different times or recordings, acting with an almost ‘fly on the wall’ like presence over a torrent of live performances. You feel and smell the sweat and aggression in the songs; immerse in their primal essence and emotion as they roar at the world. It is not a release for those without an appetite for the origins of punk in its most vicious guises, but for those where fire in the belly burns with vicious causticity, it is a must.

The album starts with a ferocious bang, opener Don’t Believe It a fire of abrasive riffs and crunchy rhythms over which Reifert snarls and

growls out the lyrics. Sex Pistols like hooks also sears the oppressively raw encounter, adding to the instantly contagious lure of the song. It is a tremendous start, especially with a great expulsion of guitar enterprise towards its conclusion, which leaves the next up Eyes Red And White in its wake. To be fair the track flies at the jugular with jaws clenched ready to rip out the throat of the senses for another riveting and blistering thrill but it is unfortunate to be sandwiched between the strong starter and the excellent Seeing Scars. At even at this point assumptions are set for the feel and voice of the album which the third song pleasingly confirms with its caustic graze of sonic hostility, vocal maliciousness, and rhythmic predation.

It all makes for a formidable and compelling entrance by the band swiftly put into context by the brilliant Glue Trap. Again riffs and rhythms are just a crescendo of vitriolic energy and intent to lay down an appetising canvas. A base which is then dealt exhaustive exploits of heavily throated grooves, spiteful hooks, and a flame of harmonica toxicity. It is barely over one minute of classic punk mayhem, a mix of Circle Jerks and The Exploited with just a touch of Stiff Little Fingers and quite outstanding.

Band and album continue to excite and impress in varying degrees, the likes of the Dead Kennedys sounding Everywhere is Nowhere with its irresistible niggling barbed hook and anthemic chorus and the surely Motorhead inspired rock ‘n’ roller Brian In A Sling casting new infestations into thoughts and passions whilst tracks such as the emotionally grizzled metal fuelled In My Veins and The Ramones kissed Disposable Soul without reaching similar heights still inspire and ignite a greedy hunger with their sonic and muscular vehemence. To be honest there is not one track which does not leave an invigorating and lingering mark, the depth of the savage rancor and occasionally the raw production helping choose some tracks over others as favourites, as well as of course the richness of hooks and shapely riffs, but all songs easily spark new strains of greed towards the album.

Bigger highlights of the album come in the eye balling intense Disconnection and the ridiculously catchy Complaint Box, a song which in fifty two seconds simultaneously bewitches and ravages ears through to emotions like a dangerously peeved tornado. Their triumphs though as soon exceeded by the abrasing animus of Off The Rails and the even stronger alienation of Circle of Wounds, a track where discord and anthemic potency align for a mouthwatering slice of brutal invention.

Brought to a potently solid and enthralling close by the lethal punk croon of Learn and Burn and the heavier rock bruising of Nothing To Say, the album is an excellent bridge to old school punk and modern ferocity which sparks an anticipation of much more from the band, hopefully this not a one off project. Flaws on the album, if they can be classed as real issues, is the production which meanders too much across the songs and as evidenced by the last two tracks, at times there is a too close a similarity between some tracks. That though is more than anything just finding something to temper the enthusiastic recommendation we can only make to all wanting honest merciless punk rock.