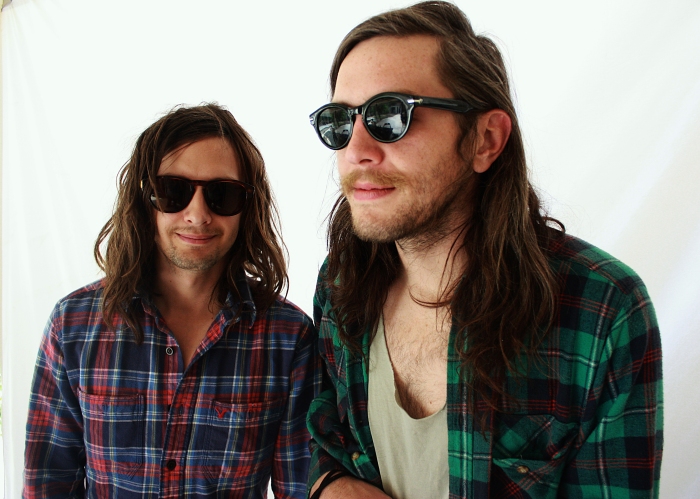 Having been seduced and exhilarated by the band’s previous EP Undercover Crops, it is fair to say anticipation of getting the senses into Any Ol’ Way the new album from Tweak Bird, was acute and swiftly more than satisfied as the eleven track exotic haze of psychedelically enhanced rock unveiled its acidic and generous charms. Whereas the previous release could be said to be more stoner bred at its core, the duo of brothers Caleb Benjamin and Ashton Leech seed their new full-length more in the seventies psychedelic rock side of their creativity which in turn breeds their finest, most potent hour yet. It is a glorious evocative aural summer of fresh melodic weaves and sonic winds all caught in the inventively unpredictable psych pop kissed adventure that is Tweak Bird.

Formed in 2006, the Los Angeles based brother’s musical cv together goes back years before, as kids writing and recording music after growing up on a diet of Black Sabbath, King Crimson, and Pink Floyd. Jumping forward to 2005 with Ashton putting together his own drum kit and Caleb experimenting on the way to purchasing his first baritone guitar, the pair made their live debut as Tweak Bird within a year which led them to the attention of Melvins whose drummer Dale Crover subsequently passed a drum kit down to the duo. The bigbonesnakebite 7” came next followed by the Reservations EP in 2007 and 2008 respectively. Their acclaimed Crover produced self-titled debut album two years later was the spark to greater attention and spotlight upon the band, which Undercover Crops pushed on yet again in sound and responses, a success matched by their live shows which has seen the band stand alongside the likes of Tool, Melvins, Big Business, Black Mountain, Best Coast, and Ted Leo and the Pharmacists whilst driving their own headline tours in the US and across Europe. As stated though Any Ol’ Way is another kettle of fish thrusting Tweak Bird to the highest captivating perch within imagination reeking sonic rock ‘n’ roll.

sense of something seduction lurking, a feeling soon realised as the guitar expands its slow coaxing alongside similarly urgent and gripping rhythms. It is an immediately captivating enticement which the vocals soon climb all over with strained melodic hues and irresistible expression as small hooks and hinted grooves entwine their welcome fingers around thoughts and a rapidly emerging appetite. It is hard not to think of Melvins with the song but to that slithers of Hot Hot Heat and The Mai Shi offers their suggestions also but as mere spices in something primarily belonging to Tweak Bird.

The enthralling start is soon lifted up a level by Greens, the warm soak of seventies psychedelic sun of its predecessor seamlessly given an injection of gnarly riffs and heavy stoner-esque virulence speared by Sabbath-esque rhythmic stabs and sonic groans. The gait of the song is a prowl and its air an oppressive breath but with harmonious vocals and sonic flames carving out searing grooves, the track is an invigorating fascination whose bruising is only welcomed wholeheartedly.

The first major pinnacle on the album comes next in the aural temptress that is She Preach, a song which from a seducing mist of sound launches into a ravenous almost wanton persuasion of melodically teased grooves and crisply jabbing beats reined by the again impressive individual vocals. The song SOON adds catchy claws to its salacious dance of sound and lyrical enticing, hooks and infectious bait almost deviously infesting the senses and passions as the song spreads its erotic charms, wiles enhanced by the excellent discordant blessed sax croons which brings thoughts of eighties UK band Essential Logic to the fore. It is a magnificent provocation which leaves the following A Sign of Badness a little pale in comparison, but with its wispy vocals and muscular beats the track glides resourcefully across senses and imagination to add another twinge of hunger for the release.

The great alignment of raw aggression and melodic elegance makes Peace Walker a riveting encounter next, its sixties pop lure within a slightly cantankerous punk spawned sonic voracity insatiably magnetic. If you wondered what a mix of The Doors, The Beach Boys, and Corrosion of Conformity might sound like then this song is a good hint. It is another potent entrapment for thoughts and emotions but soon passed over for the ridiculously addictive Builder with is post punk repetition and gentle but imposing sonic nagging. The instrumental seeks out and consumes every pore and synapse with delicious chilled toxicity before flowing into the vibrantly smouldering arms of A Sign of Positivity. With almost griping deep toned grooves and a rhythmic shuffle which defies feet not to join its dance, the song as the vocals soars majestically and almost melancholically evolving into a thoroughly riveting and thrilling sway of aural hypnosis.

Both the niggling contagion of the brilliant Mild Manor and the summer soirée of Inspiration Point keep album and listener entwined, the first providing five minutes plus of the kind of rhythmic and sonic transfixing bands such as Gang Of Four and Joy Division conjured so decisively. Complete with short but deeply penetrating hooks and spatial toxins, the track works its way towards a rich and fully packed stoner rock fuelled fire as a finale. Its successor is a narrative locking intrigue and surf party suasion into a psychedelic rock sculpted sway of melodies and shadows, a song not as potent as the last but full of drama and invention to enslave attention and satisfaction.

The album is completed by the outstanding Burn On, a feisty and raw surfaced rock pop proposition which simply chains and romances with the passions like a high school teenager, even if one clad in stalker like intent, and a humid reprise on the bewitching opener called Sunshine (slight return). The pair makes a mesmeric conclusion to a spellbinding adventure and pleasure.

The David Allen produced Any Ol’ Way according to the Bird brothers “…voice our opinions and feel comfortable. We hired our dear old friend, to engineer and co-produce, which helped us explore new sounds and develop unfinished ideas. We believe in peace, marijuana, individual freedoms and not taking ourselves too seriously. This just happened to be what came out.” It is all there to be heard within the album where freedom seeps from every note and syllable.

Any Ol’ Way is available now from http://tweakbird.bandcamp.com/releases and on vinyl via Let’s Pretend Records now!