The six very quiet years since the release of their third album To Death and Beyond… in 2008, has seen Battleroar deal with line-up changes which has seen half of their key personnel change. Whether it is merely that which has brought the lengthy absence we cannot say but certainly with the release of new album Blood of Legends shows that the Greek heavy metallers have not lost any of their passion and creative fervour. In fact it has been intensified in many ways with the new release proving to be the band’s most potent encounter yet. It is fair to say that the album is not quite an unbridled success offering moments which only simmer in attention and emotions but for its main Blood of Legends with its anthemic weaves of epic and power metal with undertones of folk evocation, leaves imagination and satisfaction alive.

Formed in 2000, Battleroar has become one of the most notable bands within the Greek metal scene, from their self-titled debut album in 2003, through its well-received successor Age of Chaos two years later and the acclaimed To Death and Beyond…, the Athens hailing sextet has forged a reputation and fanbase spreading far across Europe. Taking inspirations from bands such as Manilla Road, Cirith Ungol, Manowar, Jag Panzer, and Heavy Load into their own adventures, their sound has evolved and stretched to encompass richer flavours and depths across their releases, Blood of Legends providing the most expansive offering yet. As mentioned earlier changes in members occurred between releases; the loss of guitarist Manolis Karazeris and vocalist Marco Concoreggi hitting the band in 2009. Temporary replacements in Stelios Sovolos on guitar and John Papanikolaou (ex Innerwish) on vocals though filled the gaps alongside band founders Kostas Tzortzis (guitar) and Nick Papadopoulos (drums), and violinist Alex Papadiamantis. The following year saw guitarist Antreas Sotiropoulos permanently take over from Sovolos with bassist Stavros Aivaliotis and new vocalist Gerrit Mutz joining the band in 2011 and 2012 respectively. All the changing has not tempered or defused the rigour and invention of the band in songwriting, sound, and simple presence; as stated previously seemingly it has only put a fire in the belly of the beast which roars quite captivatingly across Blood of Legends.

Finding lyrical fuel from again Greek mythology, the album opens with the atmospheric scene setter Stormgiven. Opening within a 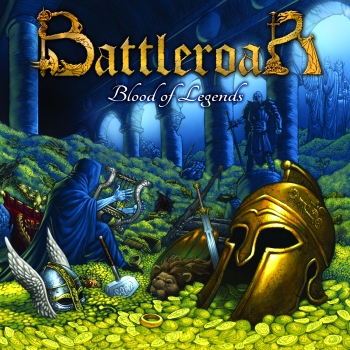 brewing tempest, the instrumental is a bewitching piece of acoustic endeavour and emotive ambience, guitar and violin graceful caresses which awaken attention within crowding shadows and awaiting intensity. The song immerses the imagination into the scenery of the impending adventure, cold and warm textures coaxing thoughts with an emotive enveloping cast by the riveting strings of the band. The track makes way for the immediately gripping The Swords Are Drawn, a feeling of passion and flexing sinews coring the riffs and rhythmic framing round the sonic call to arms. With an urgent canter and insatiable appetite to its epic breath the song seduces with ease, the vocals of Mutz backed forcibly by the band adding to the inescapable bait.

The uproar of the track is instantly tempered by the harsh and cold atmosphere of Poisoned Well, its touch portentous especially with the melancholic croon of the violin which joins the shadowed ambience. Once the heavy weight of rhythms, bass, and riffs slowly stroll around the landscape of the premise a merger of hope and intimidation converge provocatively on thoughts. The prowling intensive beats of Papadopoulos add stronger enticement to the rapacious presence and edge of the narrative but it is the bewitching flames bred by the violin which colours the inciting canvas most vividly. With flaming flights of sonic enterprise and contagious expression to the vocals, the track lays down an early pinnacle to the already impressing release.

The following title track brings a thick and healthy drama to proceedings though it fails to match the early successes in stirring up the passions. Once again though the infectious canter which the band spine their songs with its irresistible whilst the individual skills of the band conspire to weave a bold and muscular picture for mind and appetite to eagerly indulge in. From its incendiary finale the song makes a gentle farewell as next up Immortal Chariot dawns on another epic impression, horses and carriages of war driving across the entrance of the track before it surges with energy and emotion across blazing celestial skies. As its predecessor the track is an absorbing proposition which just fails to rouse a storm in the emotions though that is soon taken care of by both The Curse of Manea and Valkyries Above Us. The first of the pair unleashes a menace and danger to its rigid stride of riffs and intimidating percussive beckoning almost instantly; its pressure and imposing bearing a thrilling provocation and diversity within the album. The dark intent of the track though is perfectly veined by and blended into a sultry seduction of violin and the impressively descriptive vocal tones of Mutz whilst a mystical toxicity flirts with and enlivens the passions further. It is a glorious encounter which ensures the senses are treated to an antagonistic climax. An outstanding carnivorous bass growl and ravaging riffery punctuated by bone splintering rhythms assaults the ears for an ardour drenched reception befitting the best track on the album though it is soon rivalled by its melody washed successor and its soaring epic breath and equally towering sounds equipped with piercing sonic hooks and virulently infectious almost siren like melodic design.

In many ways the rest of the album lays in the shadow of those two songs though the battle hardened Chivalry provides an appealing clash of venomous shadows and scorching melodic light whilst the highly emotive and engrossingly layered Exile Eternal places thoughts into a cauldron of tantalising aural scenery. Neither sparks a major outburst but both ensure album and band retain an inspiring and lingering grip.

Closing with Relentless Waves, an instrumental epilogue to the emprise enjoyed, Blood of Legends is a powerfully magnetic encounter which draws you back into its venture time and time again with consummate ease. Battleroar has not returned with the true epic you just feel is there inside them but undeniable have provided a rich and compelling appetiser which pushes them further towards the summit of epic invention.