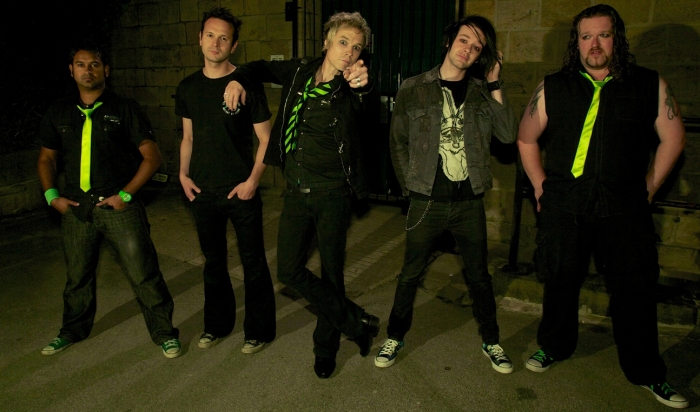 If you missed out on the initial release of Dark Little Heart at the tail of 2012 from UK rockers The Idol Dead then stand ready to leap on board with its reboot this week through the band’s own label RAAA! Records. It is a feisty and fiery slab of rowdy and bruising rock ‘n’ roll but one with all the insatiable charm of a lady of the night and the contagious strength of the common cold. The Leeds hailing quintet merges glam and hard rock with a voracious breed of punk resulting in an invigorating and immensely enjoyable rampage of sound and enjoyment. Admittedly its first contact courtesy of the opening song left a promising and pleasing suasion but one which left reservations in regard to its originality and finding a spark to ignite more than simple satisfaction. They were short lived concerns though, the second track bringing a voracious bait before the imagination which set thoughts and emotions on fire. Certainly the album stays away from forging a really distinctive new proposition, thoughts of The Wildhearts and Backyard Babies an undeniable comparison, but Dark Little Heart emerges as one rebellious stomp of rock ‘n’ roll which simply hits the sweet spot.

The Idol Dead began in 2008 and soon made a rapid impression on the local rock scene. Their reputation for explosive live performances went before them as the band played throughout the UK, sharing stages with the likes of Killing Joke, Sebastian Bach, Buckcherry, Evil Scarecrow, Blackfoot, Warrior Soul, Molly Hatchet, Hatebreed, Pitchshifter, Laika Dog, and Spear of Destiny along the way as well as enjoying great responses at numerous festivals. After the well-received Shooting Star EP, the band’s debut album Die on my Feet or Live on my Knees on their own label marked the band out and drew strong responses but it is through the crowd funded Dark Little Hearts that you feel that The Idol Dead will find access to a much wider attention and fevered spotlight. Inevitable line-up shifts along the way have seen the band adapt and grow so that the five piece of vocalist Polly Phluid, guitarists KC Duggan and Tim Jeffs, bassist Dan Sugden, and drummer Nish Gonsalkorale now show themselves to be a potentially explosive proposition within British rock.

As mentioned at the start of the review, opening track Blue Skies provides an appealing encounter but is somewhat underwhelming in its

persuasion due to there being little surprise or unpredictability to its otherwise potent presence. Certainly the passion and craft of the band is an open declaration whilst infectiousness is rife from the riffs to the thumping rhythms and from the impressive vocals to the united anthemic band calls beside them. In hindsight it feels like the band is playing safe to start things off, giving ears a well formed and boisterous yet easily accessible entrance into the album. The track is still a thoroughly pleasing offer though but soon left looking pale as the following song lights the fuse to a passionate and imagination stirring experience.

Six Feet Under is just glorious, from its initial flush of raw flame of riffs and inciting rhythms it is an instantaneous trap which has feet, senses, and imagination recruited with its punk ‘n’ roll bred contagion. Holding an essence of Misfits to its sinewed romp and passions corralling enterprise, the track drags out a hungry appetite for it and the album. Again it is fair to say surprises are scarce in many ways, though just the weighty temptation and resourceful triumph of the track alone makes a detonator to the expulsion of expectations whilst leaving thrills and spills rampant. It is a major highlight but one which itself is exceeded by the following Vampire. From an atmospheric intimidating ambience in the dead of night, the song erupts with scorching flames of guitar and moody rhythms matched by the dark throated bass. The vocals of Phluid equally have a sinister edge and leer to their tone which adds greater intrigue to the narrative of the outstanding song. The band finds an even more addictive toxin to the chorus and infection veining the horror punk like predation, sculpting a track even more immense and irresistible than its predecessor.

Both Dion and Hey Girl unveil superbly crafted and shaped bodies of hard rock bred enticement and though neither can match the heights of the previous pair, the songs feed compelling strides of rock ‘n’ roll into a hungry appetite. The first is much like the opener in that is has few moments of wrong footing assumptions but provides enough invention in its unrelenting catchiness to bring a wholesome appetiser to devour before the more substantial feast of its successor twists and rolls with its garage punk/hard rock fusion. The song takes mere seconds to have limbs and voice enlisted in its cause, giving them a vivacious ride of riffs and grooves with barbed rhythmic hooks before making way for the ferocious Bad Fiction. The punk sided heart of the band is an open brawl in the song, rapacious mischief and energy surging through riffs and adrenaline gifted rhythms. Vocally too the band snarls and incites but it and the sounds all come with a wink and a loud whisper of Generation X within the urgency and pent up roar which wants to rock rather than fight.

The pair of I’m Drowning, a captivating stirring ballad featuring the excellent guest vocals of Claire Cameron alongside the again strongly impressive Phluid, and the magnetic Bleed continue to keep imagination and emotions on their feet; both with a longer to convince persuasion but each evolving into easy to recommend highlights upon the album.

The closing stretch of the album is a little undulating but continues to thrill; the blues filtered You Don’t Know a sonic fire which misses finding the trigger which elevates other tracks so masterly and the closing Beautiful Disaster almost ending the album as it started with a less than imposing offering but a skilfully written and presented one which does enough to leave a contented listener. Between them though the band unleashes one final gem in the rabid punk spawned I Don’t Wanna, an unbridled charge of dirty and belligerent rock ‘n’ roll with all the lures and seduction to spring the inner punk in us all. It is a terrific provocation again proving the potential and already open quality of The Idol Dead.

With Dark Little Heart you are not going to find new pastures to explore but for excitingly accomplished and virulent rock ‘n’ roll, there are few around right now to impress more than The Idol Dead.

Dark Little Hearts is available on 5th May through RAAA! Records.