Home › Music › Album › Herod -They Were None

Herod -They Were None 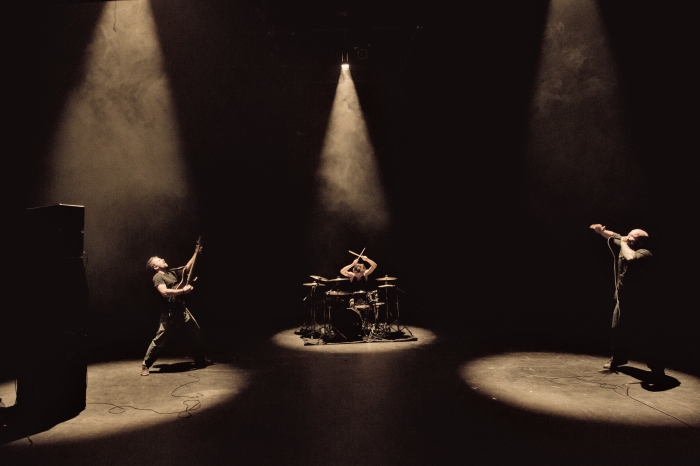 An encounter and experience which permeates senses and imagination with a ravenous and intense emotional hunger, They Were None is a dramatic and merciless introduction to Swiss post hardcore band Herod. Their debut is a leviathan of weight and intrusive endeavour, a dark and stark tempest of voracious atmospheres and inescapable intensity examining every pore, thought, and emotion. It is at times a testing and exacting encounter but one which is as rigorously compelling as it is intrusively predacious.

Herod was initially the solo project of guitarist/bassist Pierre Carroz which came to life in 2006. Holed up in Malmø in an isolated studio apartment, he began creating and merging dark and depressing riffs with his baritone guitar, recording them on an old 4-track recorder. Taking inspiration from the cold and desolate Swedish climate he returned back to Switzerland where in 2011 he met former Twisted drummer Fabien Vodoz and A Fine Day to Exit vocalist David Glassey. Uniting to form Herod, the trio worked the already bred ideas of Carroz into new songs, tracks which would come to make up their impressive debut They Were None. Recorded in 2012 with producer Julien Fehlmann (The Ocean, Coilguns, Unfold) and mastered by Svante Försback (Volbeat, Rammstein), the album has emerged as a devastating proposition soaked in destructive beauty and venomous enterprise. It is an uncompromising and often punishing incitement brewing a consumption of sludge, hardcore and progressive metal which instantly thrusts Herd, with a line-up completed by guitarist Bertrand Pot, into an immense spotlight. 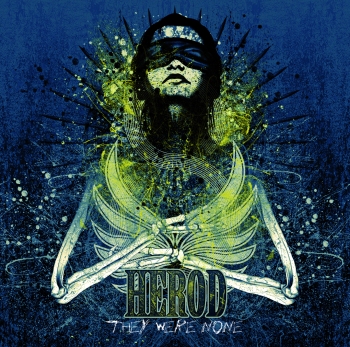 breath. Its intimidating expansion begins as a distant squall but is soon immersing ears and beyond in a rapacious caress. The guitars cast a portentous and immediately menacing toxicity, crisp rhythms and sinewed throaty riffs spearing and veining its malevolent air to further engage and twist the psyche as the track’s exhaustive narrative unfurls lyrically and emotionally. It is a murderous encounter but irresistibly captivating especially with the brief escape of clean vocals and its entwining melodically bred sonic web; thoughts of Converge meets Cult Of Luna whispering in thoughts as the song invades further.

It is an attention capturing appetite igniting ten minutes immediately matched and pushed further by Glory North and then Inner Peace. The first roars at and contests with ears from start to finish whilst employing further unpredictable and enthralling twists of vocal diversity, a restrained passage of emotive design, and predatory imagination. Essences of Meshuggah add to the carnivorous qualities of the throaty guitar and even darker bass as the track persistently breeds fearsome yet seductive bait to its persuasion. The second of the two is even more dangerous, its more controlled gait adding menace to the intensive manhandling of thoughts and emotions by the of song’s voracity and that of its individual elements. It is a suffocating proposition but as the previous songs is swamped in rewarding violations and ingenuity.

A melodic entrance with a hypnotic percussive accompaniment instantly makes the following Northern Lights a virulently appetising proposition, the bestial gnawing in the background sparking encroaching shadows around the elegant seduction flirting with ears and imagination. The beauty of the scenery continues to call even when the track unleashes its barbarous wash of domineering rhythms and corrosive riffing; the track a brutal yet warm temptation exposing further the outstanding songwriting and composing of the band. In the hands of others the song could be just an overpowering slab of hostility but Herod sculpts it to be certainly uncontrollably demanding but also the enabler for the imagination to explore its canvas and textures.

From the sinister and immersive instrumental Sad Hill Part I, the pair of Albert Fish and We Are the Failure expose the weaknesses of emotions, exploring and pushing the limits of their and the listeners fears. The first is a ruinous concentration of coarse vocals and riff spawned rabidity which initially has assumptions expecting a primal storm throughout but the veining of sonic tempting and angst clad expression to the vocals ensures another engrossing premise, if one lacking the adventure and lures of previous songs. Its successor though is another matter, the track a melancholic proposal which from its sombre opening melodies soars into the passions with the heavy lipped dark tones of Glassey, his clean vocals merely hinted at on other songs, given full rein to immediately impress. He is not the strongest singer in that style but with such passion and expression to every squeezed syllable he is magnetic. The track itself is a helter skelter of angst bedded voracity and enslaving metallic design, every note and thought a glorious trap.

Through the bordering on savage aural protestations of Betraying Satan, captious rhythms and guitars spiteful intrigue to the tempestuous vocals and sonically laced grooves, and the rigorously erosive Watch ‘em Die, the album continues to exhaust and impress whilst the excellent No Forgiveness For Vultures moves from a heavily soaking persuasion into a mouthwatering maze of unpredictable riffs, persistently twisting invention, and biting yet composed rhythms. With the dramatic final instrumental Sad Hill Part II concluding the release, They Were None proves itself to be not only a masterful debut but an immensely exciting one. Herod has announced its arrival in a strenuously impressive way, one which is still increasing its potency with every brave immersion into its depths.

They Were None is available now @ http://herod.bandcamp.com/album/they-were-none