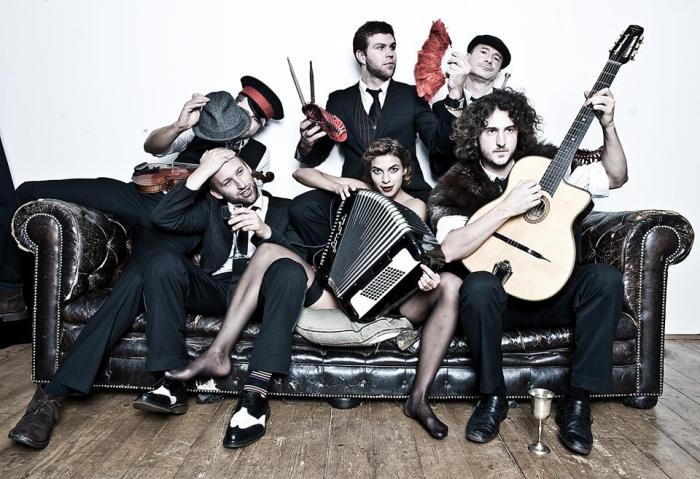 It has already been firmly established that if you want your feet and body exhausted but blissfully contented then colourful UK revellers Molotov Jukebox are your puppeteers, their previous pair of EPs already the launch pad for riotous hips and gaping grins. Now the band parade their debut album, Carnival Flower, an eleven track festival of lyrical adventure and lustful melodies framed in a rhythmic escapade which frees inhibitions and ignites the raw dancer inside. It is a release which tempts and smoulders, caresses and incites as it takes the imagination on boldly hued and energetically fuelled romps. Unlike their previous releases there may be no real killer tracks at large, songs which virulently ignite the passions, but instead the release has a perpetual seduction which just as potently brews an enraptured submission.

Molotov Jukebox is a six-piece celebration of passionate aural festivities merging styles such as Latin soul, calypso, gypsy, swing, and dubstep into a unique revelry which has been tagged as gyp-step. Led by the distinctive sultry tones of Natalia Tena (an actress renowned for her roles in Harry Potter and Game of Thrones), and comprising of guitarist Adam Burke, bassist Tom Wilson, drummer Max Burnett-Wain, trumpeter Angus Moncrieff, and violinist/vocalist Sam Apley alongside her, the band has constantly garnered acclaim whilst inspiring an ever growing and feverish fanbase with their vibrant sound and equally vivacious live shows. Both their debut EPs, Double Dare and especially its successor Bang thrust the band into a concentrated spotlight feistily backed by unrelenting festival appearances, certainly in the past eighteen months or so. Now with the release of Carnival Flower there will be no surprise to see the London based band taking country and bodies further afield by the scruff of the neck and leading them to filling streets and dance halls with swerves and sexual dance moves, all to the sound track of Molotov Jukebox.

As soon as rhythms hit to mark the entrance of opener Tread Softly, an itch begins in the toes. The punchy beats of Burnett-Wain hold a

smile to their swing which is as infectious as the soon to join warn embrace of strings and the vocal persuasion of accordion caressed into life by Tena. It combines with whiffs of sonically crafted guitar and a percussive coaxing into an even tempered but inciting romp brought further to life by the seducing vocals of Tena within sober blazes of trumpet. It is not a riotous start but an eager persuasion which twists and flirts with sound and ideas to waken attention, appetite, and imagination with ease.

From the slightly annoying fade-out of the song, just a personal gripe in a liking for proper finales to songs, temperature and bait is increased thr0ugh Don’t Wanna Know. A vocal croon by Tena courted by excellent group harmonies beside her, kiss the ears initially providing a sexy flirtation which evolves into an agitated stomp with melodic skirts swishing over the senses as pulsating bass riffs use salacious tempting under the climactic flames of trumpet. As its predecessor, the song is not a full-on stampede of aural diablerie but holds an irresistible anthemic lure which enlists body and passions without resistance. The song simmers and at times almost taunts with rhythmic enterprise and string plucking, everything combining to design an evocative and humid template for addiction.

The band’s new single, Neon Lights steps up next, again gentle sexually inviting suasion starting things off before trumpet and vocals soar gloriously across the ceiling of the song. Veining the flight the bass strolls with inviting shadows whilst keys and accordion add their intrigue and mystique to the noir shaded scenery. It is a sumptuous blaze of colour and sound, a track which just grows and grows in the psyche and memory the more it infests the ears. That is true of the album to be fair, first impressions impressed and keen but a new breed of appreciation and ardour emerges given time; previous releases were an instant lust but the album takes a different longer route but with the same result.

The following Can’t Find You is another slow starter on emotions though a swift temptress of ears and thoughts. Almost like a formula for the album, the song also opens up with reserve and a melodic flutter of its lashes before throwing off its hood for a fleet footed waltz of provocative melodies and wanton hues. A mix of pop and swing, it moves around imagination’s dancefloor arm in arm with flailing hooks and elegant harmonies casting a robust yet sensual toxicity over the senses.

The jazz lounge like bred Punchlines weaves and glances across ears with a rich and soulful fondle lighting up thoughts. It is a graceful flame of emotional melodies and sixties harmonies which leaves satisfaction bulging if passions simmering, though they are soon aflame with the brilliant House Fire Smile. The first surprise emerging from the heralding blaze of trumpet and electro additives is that the lead vocals are taken by Apley, an inspired move as his vocals are impressive and make a brave and successful twist to the album. There is a feel of Lazy Habits and Dizraeli and the Small Gods to the song, a whisper of hip hop toying with the heart of the song as a reverse of the norm vocally throws a deliciously unpredictable and magnetic new coal in the fire of the album. The song has a bounce and swagger to its relatively considered stroll though there is always the feeling it wants to explode. Tena’s voice and a niggling guitar toxin only add to the riveting call of the song, an encounter which steals top honours on the album.

Both the frisky Sexfoot and the smouldering Nina keep hunger lively though both are openly pale against certainly the previous triumph. The first of the pair is like a tempered foxtrot with moments where it unleashes its inner devil whilst its successor with the smokey voice of Tena stroking every syllable and the senses in a steamy seduction courted by a classically bred Latin hearted acoustic guitar sends the imagination into a romantic encounter.

From the exotic gala of Tropical Badboy where even the dead could not resist its carnivalesque voracity, the album comes to a close with firstly the dynamic and atmospheric jubilee of No Lady, a track which finds an eighties whisper of bands like Pigbag to its determined sway of melodic curves and rhythmic hips, and lastly a reworking of Trying, a song previously on the Bang EP. The song is a masterful tempting which just has that instinctive lure to inspire full allegiance and union with its potent musical poetry but it has to be said that the new treatment does not quite work as well as the original. Despite that the track is outstanding and the perfect end to a quite impressive and incendiary release for body and heart.

Though Carnival Flower does not quite live up to definitely Bang, it is an open and thrilling doorway into Molotov Jukebox, both a proposition you need to explore at least once in your life, though be warned as one bite is all it takes to be lost to the temptation of the band.

Like Loading...
‹ WIN A COPY OF DAMN VANDALS SPANKING NEW ALBUM ROCKET OUT OF LONDON
Anti Ritual – Self Titled ›