Slain – Before The Inferno 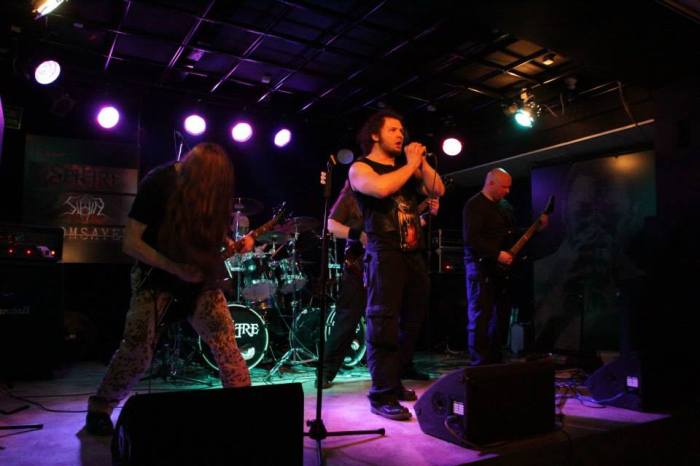 There is no re-writing the text book of death metal with Before The Inferno, the album certainly re-working but treading down existing violations, but it has to be admitted that the debut album from Polish band Slain is a thoroughly enjoyable and potently contagious provocation. Consisting of eight monstrously aggressive and openly accomplished violations, the release grips from its opening track through to its intrusive last. There is admittedly a certain mix of success within the release but never a moment where band and album leaves satisfaction wanting and pleasure lacking.

The creators of this impacting release were formed in 2005, though the band’s seeds in many ways harken back to the nineties when band founder and guitarist Paul was in Cryptic Stench. Some of Slain’s songs originated from that time with the band reworking and rearranging them to fill the full blooded onslaught of their ferocity. Initially Slain went through a few personnel changes whilst the band continued to earn a strong reputation and fan base with their live performances. A stable line-up emerged though before the album was recorded; Paul joined by second guitarist George, bassist Lucas, drummer Wojtass, and vocalist Marcin. Recorded in 2012, Before The Inferno found its release with The End Of Time Records at the tail of 2013. Since its release, Slain has seen the departure of George and Marcin, the pair being replaced by Hannibal and Balrog respectively. The turn of the year the band has begun working on new songs for their second full-length whilst this, their debut continues to make an impression and mark the radar of a persistently widening attention.

The Bełchatów quintet comes at the ears through a sinister ambience, demonic shadows, and intrusive breath conspiring to infest senses

and imagination. The niggling start to Confession of the Blind Messiah erupts into a torrent of predatory riffs and punching rhythms whilst vocally vitriol and ravenous intent clad every word. It is a magnetic entrance, the track enslaving with its concentrated confrontation before unleashing a further increase of aggression and malevolence. Speared by skilled sonic flames and a persistently shifting antagonistic stance, the riveting track makes for a mighty start to the album, essences of Behemoth and Decapitated offering their presence.

The following Wings of War strides murderously into view next, clad in a tsunami of destructive rhythms, flailing riffs, and an underlying groove which is two-toned in voice and lethal in effect. Well into its purpose, the grooves mutate into an infectious lacing of the senses whilst the vocals similarly squirm maliciously between textures, the combination rigidly enslaving an already rampant appetite for the release. It is a ferocious onslaught but ripe with contagion and addictive toxins, especially the impressive sonic blaze of guitar which colours the track with its piercing solo. As suggested at the start there is not a great slap of true originality to the encounter but thrills and neck muscle manipulation show no restraint in their persuasions.

There is a thrash sculpted fire to the sound and album, its rabid hunger again insatiably driving the force of Malleus Maleficarum and War Is Coming. The first is a feisty stalking of the senses with an angry spine of bad tempered rhythms within an acidic veining of skilfully crafted sonic incitement. Its successor takes the rapaciousness of the other track to greater immensity, its carnivorous rabidity spurring on prowling rhythms and a pestilence of riffery. The track is voracious savagery but again infuses a swagger and swing to its barbarity which infests the passions. When a song straddles the imagination and treats it to a rodeo of feverish energy and vivacity it is hard to resist even when the wounds left bleed profusely.

Fucking Gods continues the violent and irrepressible suasion of the release, its brutal rampage unrelenting yet pronounced in its precise baiting whilst the following Deadly Midget presents a more restrained attrition but one no less hungry in its predation and manipulative toxicity; grooves and riffs sharing the imposing canvas for their fevered taming and consumption of the senses. There is a touch of Sepultura to the poise and intensive intensity of the track whilst its ravenous incessancy and melodic adventure slips easily under the skin and into the memory.

The album is completed by the raging turmoil of Thorn and the imposing enterprise of Omen, both tracks a tasty horde of vindictive rhythms and scourging riffs spiced by sonic invention, though neither quite match the heights of the earlier songs. Nevertheless the pair brings a great album to a stirring close to leave satisfaction full and emotions eager for more. Before The Inferno may not carve out new inventive avenues for death metal but when it provides a hellacious ruin as exciting and stimulating as it does it is hard to raise a care. Slain has ensured that anticipation for their sophomore album is already gearing up.

Before The Inferno is available via The End of Time Records now!