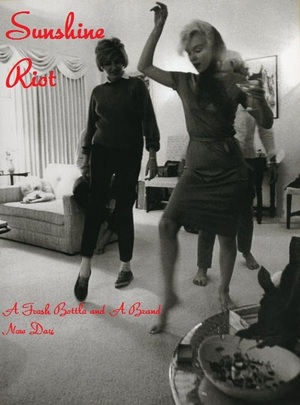 It has to be said that initially A Fresh Bottle A Brand New Day, the latest album from US rock band Sunshine Riot, was an underwhelming proposition though it certainly kept attention rigidly in its grasp. The band brings a mix of country, rock, blues, and punk to their sound but across the album it is more a case of individual tracks investigating one of those flavours rather than merging them into one rich brew. In hindsight it was that which possibly restrained satisfaction the most for the album at first but given deserved time and focus it has to be said that the Americana glazed release has emerged as a rather pleasing proposition. It does not light any fires in the belly of passions but without doubt it is an easy to frequent and keenly digest companion.

The quartet from Boston began in 2007 at the creative hands of vocalist and rhythms guitarist Jonny Orton and bassist Jeff Sullivan. Completed by the more recent additions of lead guitarist Mark Tetreault and drummer Shakes Tvelia, the band has had their sound described as “Johnny Cash meets Kurt Cobain”. It is a description you can see in the band even if it does not really paint the inventive textures which ripple throughout their varied songs, certainly those upon A Fresh Bottle A Brand New Day. Renowned for their live performances and work ethic, Sunshine Riot’s bio say that things really clicked into place with not only the current line-up coming together but just before that the band linking up with 16 time Grammy nominated producer, multi-instrumentalist, engineer, and composer George Dussault. New to the band we cannot say if that was the key but certainly there is a craft and inventive heart to their music which suggests something has come to ripe fruition.

The slamming of a heavy door awakens the album and opening track Norfolk County Jail, its intensive provocation the starter for a wistful melodic caress before defiance and urgency bursts with striding guitar and rhythmic incitement. The vocals of Orton ably backed by those of Sullivan, unfurl the narrative of the song with the track lyrically and musically a steely and expressive encounter which sparks the imagination. Of all the tracks this is one which fits that earlier description of the band’s music, its melodic rock drama fuelled by a flush of punk and grunge like tenacity. It is a very pleasing start to the album setting up a ready appetite for things to follow though that hunger is given a bit of a false start by the following Natural Causes. Immediately soaked in a country blues twang and atmosphere, the song steadily strolls into view and provides an accomplished and emotive venture to contemplate. There is something openly familiar to the track which makes it accessible but does defuse any originality and thus the spark to excite ears and emotions. Nevertheless it is enjoyable and memorable.

Both the more than decent rock canters of Cotton Fevour and Old Soul Blues like their predecessor keep the album alive in pleasure if not excessive excitement. The first is a blues washed slice of Americana complete with a throaty twang and the second a sultry slice of reflective melodic rock. Again the pair pleases but fails to emulate the success of the opening track or the livelier gaited and magnetic Quicksand Love which follows them. There is a simple honesty to the song’s first persuasion which coaxes before the vocal blend and plainly attractive hooks make their bait known. The song in turn is then left looking a little pale by firstly the impressively catchy and deliciously soulful Elizabeth Stone which features the richly textured vocals of R&B singer Carl Smitty Smooth around a core of virulent temptation and then even more so by the outstanding Senorita Punk, which as its title suggests is a riotous temptress bred in prime punk rock. Both songs provide the pinnacle of the album, taking it to new heights, especially the second with its voracious attack and scuzz smothered energy.

The next up Margaret Mae with its deep bass growl and jagged guitar bait continues to keep album and pleasure high, the song a vivacious stroll with eighties new wave vibrancy and mischievous alternative rock enterprise. The track saunters with a gentle but bold swagger, teasing ears and thoughts with persistent relish before bursting with eager will in its chorus.

The climatic Boxcar Cowboy brings a spaghetti western landscape into a union with an Americana rigour to capture the imagination again with its individual drama before the fiery and more intensive rocker Sweet Kerosene spills its sonic energy and melodic flames over the senses. Both tracks reinforce the fact that the second half of the album is a more compelling and thrilling venture to explore with the band than across the first few songs. Whether by coincidence or by intent Sunshine Riot save their strongest explorations and dramatic creations to the rear of the album and it works a treat though you wonder if a different order of songs would have made the release more consistent in its suasion.

Closing with the acoustically guided and okay Home, Sunshine Riot and A Fresh Bottle A Brand New Day provide an entertaining proposition which took its time to fully convince. This it does though, even with a few moments still lacking the kindling to light the passions, and invites a definite interest in the band’s new full-length marked for later this year.

The self-released A Fresh Bottle A Brand New Day is available now!