Thrash for us is one of those genres where originality is not always the key to the strongest excitement and satisfaction, certainly it is an added bonus but seemingly more of a rarity these days it. Australian band Harlott does not exactly buck that trend but with a certain twenty first century adventure and imagination to their 80’s Bay Area influenced ferocity, they definitely bring something feistily refreshing to the table. To be honest even if they were lacking that extra ingredient, such the voracious sound and contagious excellence of their debut album Origin long term fandom to their scintillating presence would be a given. It is an adrenaline driven blaze of metal bred rock ‘n’ roll, an exhausting and breath-taking rapaciousness which clads old school seeded fury with modern day enterprise for a distinctly exhilarating and feverishly rewarding riot.

Hailing from Melbourne, Harlott has built a strong presence and reputation within the city’s metal scene, their sound, energy, and live presence urging a strong and fevered fan base. Two EPs, Virus and None in 2011 and 2012 respectively, added to their emerging stature but it was the release of debut album Origin in the November of last year which brought the band to a wider attention, into a spotlight which caught the ears of Italian label Punishment 18 Records who subsequently approached the band. The result was Harlott signing with one of Europe’s most exciting thrash and metal labels and the release of their album this week across Europe and North America.

Origin takes no more than a few seconds to ignite ears and an appetite for the band’s sound with its title track, guitar bait drawing attention 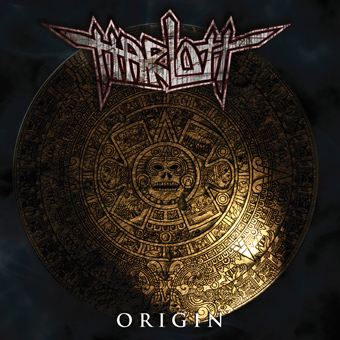 into the waiting predatory clutches of drummer Dan Van Twest and the ravenous riffery of Andrew Hudson and Ryan Butler. With the bass of Tom Richards adding another throat of intimidation to the mix, the track shrugs off any tethers and begins a stirring rampage across the passions with an intensive rhythmic battering and almost carnal riffing. The vocals of Hudson are just as eager as the sounds, riding their charge with clean but growling tones backed just as impressively by those of Richards. The song stomps and lurches from one memorable post to another, nothing spectacularly ground breaking or unique to the history of the genre but with a more explosively contagious and irresistibly anthemic stance than any thrash release has arguably presented in a long while.

It is impossible not to think of the likes of Testament, Exodus, and even Slayer as the opener and following Effortless Struggle alone light up thoughts but only as references as Harlott taken those seeds and grown something decidedly of their own making. The second song on the album drives with an even harder and uncompromising intensity strapped to an equally ferocious energy; rhythms and riffs gnawing ears and senses whilst the meaner predatory flavour of the vocals incites intimidation and badgering accusations. The track is a torrent of skilled aggression and merciless provocation, a demanding treat speared as its predecessor by some impressive solo guitar sculpting, a design the following Ballistic breeds its irrepressible hostility from also. Similar on structure and tone to the previous track, it manages to slip pass assumptions with a side step of melodic flames and a virulently contagious rabidity in energy and passion.

To be honest such the immense start if the rest of Origin had been a disaster, waxing lyrical about the band was still on the cards but there was little chance of that happening as proven by Heretic and Export Life, the first a ridiculously addictive furnace of rhythmic bewitchment from Van Twest skirted by scorching flames of sonic tempting and destructive riffery and the second a more measured but no less insatiable confrontation. As with many of the tracks there is an almost hardcore/punk causticity to the song, slightly in the vocals and definitely in the sheer maliciousness which breaks through more than occasionally. Both tracks are blessed and spiked by mouthwatering guitar invention and colouring, the album presenting some of the best dramatic but reined in solos heard in recent times.

Hierophobia makes an emotive entrance through a lone melody crafting guitar, breaking the more formula starts to encounters so far, though it is soon urged on its way by another avalanche of esuriently imposing riffing and menacing rhythms. The track is soon surging with break neck speed and impossibly catchy grooves whilst vocally Hudson and Richards hit their finest moment singularly and combined, though they never disappoint anywhere. The song closes as it began bringing a moment to breath before Kill and Infernal Massacre rampage with their turbos and skilful animosity in top gear. As the pair uncages their individual might and magnificence neck muscles are beginning to show signs of wear but even after numerous plays, Origin is not a proposition to take a break from or stop before its conclusion. So with teeth bared, much like the attack of Van Twest, the outstanding Regression is allowed its pound of flesh. Masterful rhythmic bait is laid first before the guitars hold a tempered check to their still hungrily pressing touch. The song twists with a classic metal lilt to some of its suasion though never veering from the compelling confines of the thrash intent. Arguably the most diverse and inventive song on the album, the encounter offers more proof of those aspects of Harlott which sets them apart more than enough from most others.

A powerfully assertive tempest of thrash turbulence with vocal and melodic intensity hits next under the title of Virus, the exceptional track flinging itself from the linking sonic spike between it and its predecessor across already tender synapses with acrid sonic toxins and barbarous argumentation. It is another onslaught which steals its fair share of the passions, as does the just as truculently dynamic Ultra Violence and the closing Not Long for This World, one final vigorous anthem of crusading thrash metal. It brings to an end without doubt one of the most rigorously enjoyable and exhausting albums of the last twelve to eighteen months. Yes Origins is not forging new avenues for trash metal to explore but Harlott gives the scene an explosive new shot in the arm and that is more than enough for us.