The Love Barons – Happy Together

Formed last year, UK alternative indie band The Love Barons has already been making a stir with their live shows and vibrant sound. With the release of their first single Happy Together, the London quintet will be waking up much more of the country you can only feel as the song dances on the ears and lights up the imagination. It is not a loud trumpet call which will have passions falling over themselves to shout from the rooftops but definitely a rich temptation able to spark an eager appetite for band and their horizons.

Consisting of brothers Ryan (lead vocals) and Sam O’Donovan (guitar / vocals), alongside John Chamberlain (guitar), Jamie Graeme (bass), and Nick Cooper (drums), The Love Barons as mentioned has taken little time making a fine reputation for themselves thrilling the capital’s live music scene through their own headlining shows and sharing stages with the likes of Bleach Blood and The Tricks, as well as joining Hatcham Socials on their recent UK tour. Produced by Toby Kidd of the Hatcham Social, Happy Together is the next step in the band’s pretty certain ascent, and a fine wider introduction it is too. 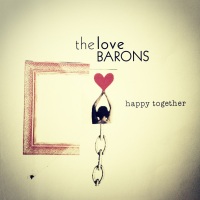 attention grabbing rhythms. It is a potent start which soon has senses and imagination in the band’s hands ready for the distinctively expressive tones of Ryan. Once he unveils the narrative the song relaxes its urgency just a touch to embrace his delivery, dancing with the passions as it takes its infectiousness into a stronger flame in the masterful chorus. There is an essence which brings thoughts to the late eighties indie scene if without offering a definite reason or band comparison, its feel only adding to the virulent bait of the song. Like all the best lures, Happy Together just increases its temptation and power the more it plays on the surface of the passions, proving not a dramatic encounter but a certain long term and lingering one.

As the single rigorously seduces and  charms it is easy to expect to hear and enjoy a lot more of The Love Barons ahead and see the band rise to impressive and commanding heights. Anticipation is on the march already here.

Grab Happy Together for free @ https://soundcloud.com/the-love-barons/happy-together-1/s-j9hlo