Home › Interviews › Exploring the eye of the lens: an interview with Carl Arnfield of Chalkman Video

Exploring the eye of the lens: an interview with Carl Arnfield of Chalkman Video

We first came across Chalkman Video through videos and a film they made with UK punk band The Vox Dolomites. It has been impossible not to be increasingly impressed at the discovery of more of their work and videos uncovered in our investigation. Wanting to learn more ourselves we thought we would bring you an insight into one of the emerging protagonists in music video by stealing time of and talking with the creator of those potent visuals.

Hello, welcome to the site and thanks for sharing time with us.

First question has to be just who is Chalkman?

Carl Arnfield, at first I didn’t want to be seen as a single person filming/editing, so I used a name to work behind, which means if other people are involved it’s still the name they see and not individuals.

What were your early inspirations growing up which you think led you into your love of and work with film?

It’s more to do with cameras and seeing the world via them in macro / wide angle / fish eye. I’m a nerd when it comes to cameras I love using them.

If I had to say what inspired me to see what is possible via film/cameras it was when a video company called “Sitcom Soldiers Ltd” filmed a band I was in and watching how they worked changed everything about how I work and create my videos…I owe them a massive thanks. They still help me with problems with lighting and understanding the process…Which proved to me that knowledge should be passed on and not kept jealously to ourselves. Everyone uses a camera in a different way so knowledge isn’t going to make people copy your work if you pass it on; it gives them a tool to create their own work.

When did you make the decision to try and make this art form your career?

It’s six years ago now when I couldn’t find anyone to make videos for my bands … so I started making my own videos, and then it was a logical step to create our bands videos.

You mentioned you were in a band, are you as able and talented with other art forms, music for example as behind the camera?

I play several instruments and a few people will be aware of the bands I’ve been in, but I guess most will not, so from punk to metal and all the way to electronica to folk, it’s all music to me and when you on stage you are performing no matter if it’s a guitar or mandolin.

We know you for your music videos, especially the excellent Vox Dolomites film which we will talk about later. Is there another angle to your portfolio, short films for example for us to discover?

Yes, I’ve done a few shorts, which is great fun and rewarding, and I’ve been talking to a few writers/actors about doing more to improve that area of film making.

The shorts are on my site.

You have filmed and directed music videos for bands such as Yo el Rey,  Epic Problem, Juno, and of course as we mentioned The Vox Dolomites. How have these generally come about? Is word of mouth and recommendations still as potent as simply being noticed say online?

Yes it’s completely word of mouth. I think you are more likely to work with people that you have either seen work of and have someone say, “try this guy…. he did our video”

How do you approach music videos, do you have a general strategy?

Keep as simple really, talk to the band, see what the song is about, see if there is any chance of creating a look on an almost zero budget. Then see what’s left and work with that.

I imagine story/narrative wise around the song itself it is collaboration between band and you?

Yes, I always try and create a video the band will like, they are paying for it so it should be what they want otherwise they will not promote it.

Once you have found a person in the band with vision and find a way of telling them how filming works and what’s possible, you do come up with ideas of how you’re going to approach the shoot.

Some bands know just what they want from the get go … some do but you have to find out by knowing what they don’t want and narrowing it down that way.

Some bands (Vox Dolomites) just say do what you do…. and are happy with me creating something, they are very trusting.

How long does it take to prepare for a shoot from the crossing Ts and dotting Is to film day?

Well, months really, from the point the band contacts me, up until I start the shoot, making sure you write down all the shots you need as the main frame work, and then the little shots / angles to fill in the video

…And generally for the shoot itself?

If you have prepped well you know what the band want and if they are good like Juno and send me pics of the room they wanted to film in you know what to expect and it’s so much easier. Having a pro-active band is a massive help since I work alone and Juno were awesome to work with.

What we loved about your videos and style is that there is honesty to the camera work; you manage to get right into the heart and climate of the performance or story, in position and in colour/lighting. Is this something you deliberately aim for or simply a welcome by-product of other things?

I can honestly say, it’s just how I film, I love “depth of field” and when using a lens to blur out everything other than a face or a say an eye or a guitar part … you drag the viewer in as that’s all you can focus on.

I see things in “depth of field” and so I film that way, meaning I look at objects and blur out the rest of the world, so that’s how I film. I love strong colours and I’ve never been a big fan of that washed out film look like you’re seeing the world via a net curtain.

Do you have a core intent which spines every piece you work on?

I make notes of what I want to create or how I’m going to create the video and if you read them back months after I have finished the video it’s what I wrote down, so yes I think I do. 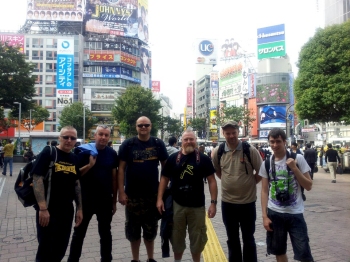 We earlier mentioned the brilliant Vox Dolomites, a band we love and you have made a few videos for. You made the riveting thirty minute film with the band of their Dirty Work Tour in Japan. How did that gig come about?

That all happened because Will, the guitar player said “you should come film it” as an off the cuff remark, and that was it, simple as that. Will is an enabler and he knows it, he also knows me and my love of travel, so it doesn’t take much for me to say yes to something like filming in Japan.

That was the biggest project to date for you?

Japan was one of the biggest things I’ve done, but last year 2013 I was in California filming a band called The Started-Its where I had to film their support slot to Barbwire Dolls and produce 3 promo videos as well in a matter of days

….and to make things worse/better I had to learn a couple of the songs and join them on stage for the last song on guitar and they refused to rehearse the songs with me… no pressure then!

How difficult were the logistics of the project alone to work out?

If you’re walking into a situation with a band you know, you are able to get things set up a lot quicker

But flying to a country like Japan and filming in venues in cities you don’t know and also record the audio for mixing later to be synced to your video …. I think it’s a logistical nightmare and I have to say I had sleepless nights for months before I got there.

But being pragmatic to say the least you try and work out everything that COULD go wrong and have a plan b (c, d & e) just in case.

Not just saying it to make you our friend 😉 but it is for us one of the best tour videos in recent times, a film which not just shows the band but the atmosphere and passion created by the fans during and outside of the gigs themselves. I know the band is very popular in Japan but were you expecting to see such fervour personally?

Thank you, I’m very flattered that people like the work I do, being completely self-taught I self-doubt to whether I can achieve the goals I set for myself.

I was warned about Japan and how bands are accepted there and loved, but also it was overwhelming how some of the fans that travelled to a few of the gigs gave me gifts because I was with the band… just so welcoming, amazing people (stunning food as well)

There must be plenty of difficult moments and funny stories coming from not only that project but overall jobs, anything you would like to share with us? Any secrets?

What’s the old saying ….”what happens on tour stays on tour”

Is there any particular video or piece of film outside of the Vox Dolomites movie which you are most proud of? 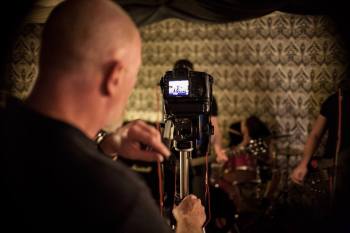 Yes I’m really proud of the Randolph Swain & The Red Lights – Little House Video that I shot last summer in Manchester at 4.30am in an empty city centre.

I had to convince then that it’s all about the light and feel of an empty city … and being in the north of the UK its light very early in the morning in summer.

What is your latest project and what is up-coming in the world of Chalkman Video?

I’m going to be in San Francisco filming several bands including The Started-Its and a few I meet last time I was there.

Where is the best place to see your work for the readers?

My web site has most of the work www.chalkmanVideo.com

Thanks once again Carl for letting us steal some of your time.

No thank you for letting me crap on about what I do.

Lastly please leave us with the sounds and bands which ignite your passions outside of your video work?

That’s so easy The Dickies to Pegboy to Decendents to Biffy Clyro to Godspeed You! Black Emperor to Leftfield … depends really on my mood.

We will be looking in on Carl during his upcoming work in San Francisco so watch this space but before that go check out his work at the above links.