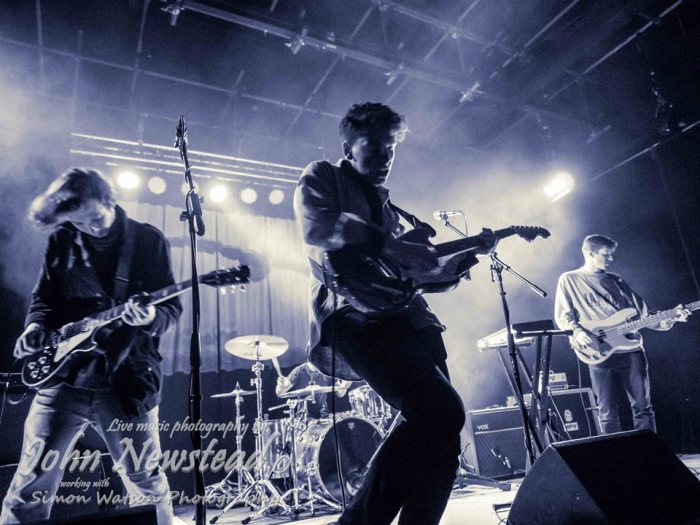 UK melodic noise makers Dumb is earning a fine and eager reputation for their vivacious and energetically contagious sound, something the new video and song Two Bottles sparks another keen ardour for with its expressive and emotive freshness. The second track on their recently released AA single Supersonic Love Toy/Two Bottles through One Beat Records, it makes another potent and earthy persuasion to the thrilling emergence of this Birmingham band.

Filmed by James Woods at Viceroy Shoots, the Two Bottles video like the song itself is a relaxed party of freedom and losing inhibitions. It provides an almost fly on the wall like narrative to scenes around the central core of the band as they play the song in an informal manner. Visually too there is a clarity and at times starkness in colour, tone, and scenery which lays suggestions of making adventures from little stimuli and uninspiring climates. The video provides fine seeds and potent imagery for the imagination to interpret and dance with whilst the song provides a weave of melodic jangles and provocative rhythms from its opening seconds which equally flirts with thoughts and emotions, not forgetting inspiring feet to add their keen shuffle to the experience.

Dumb has already fired up appetites for their sound though the release of debut single Dive and the following Retina as well as their acclaimed live performances which has seen them sharing stages with the likes of The Charlatans, The Vaccines, New Order, Darlia, Skaters, LSA, Superfood, Baby Strange, Charlie Boyer and the Voyeurs and many more. Recorded with producer Cam Blackwood (Darlia, London Grammar, George Ezra), Super Sonic Love Toy/Two Bottles takes the band’s presence and stature up another level with the new video an additional impressively magnetic enticement into the world of Dumb.

Musically the band combines inspiration from Pixies and Built To Spill into their own indie/noise alchemy, one with an elevated distinctive twang to its breath and expansive depths to its passionate sonic sculpture. The other song on the single release also has a video already released to match its thrilling sound; Super Sonic Love Toy making an engagingly and evocatively expressive temptation on ears and imagination matched by the monochrome air and beauty of the video merging the band at play, work, and scenic stalking. Whereas plenty of videos just place a band in a set to play out the latest track, both videos and Two Bottles especially, leads the listener into an honest world of lyrical and emotional intent.

Dumb is a band on a feisty march with Two Bottles its latest irresistible invitation. It is easy to imagine that very few will be unaware of the band over future horizons but as the new video suggests, why wait for it to happen when the gateway to fun and adventure is there already. So we suggest heading over to the band’s website at http://www.werdumb.com to immerse into both songs and videos and catch Dumb on the start of their certain ascent.

Like Loading...
‹ Damn Vandals – Twist Up And Tangle
The Mouth Of Ghosts – You Will Go Again From Me EP ›