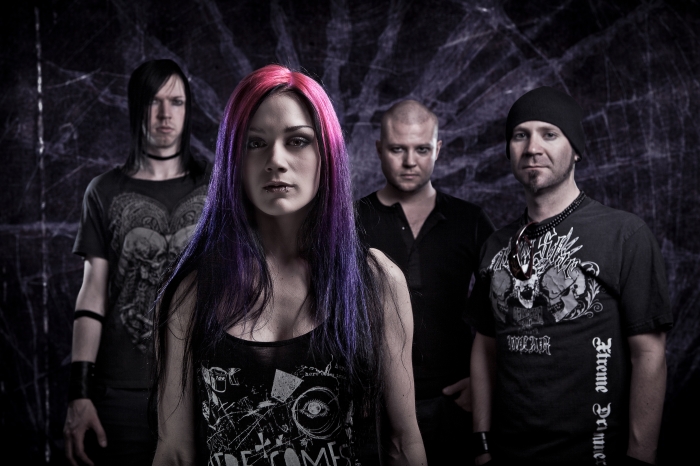 Providing the evidence as to why there is a real buzz brewing around Danish melodic metal band Forever Still, the Breaking Free EP makes a charming captivation with beauty as prevalent as muscles. Merging gothic and melodic metal to simplify their sound, into something not quite unique but attractively distinct to the Copenhagen quartet, Forever Still is an emerging proposition to set the imagination creating and emotions basking.

The band came about in 2009 from the linking up of Mikkel Haastrup (bass, guitar, keys) with vocalist Maja Schønning who he came across during a gig with her former band. Working on songs and recordings, the pair was joined by drummer Chad T. Charlton two years later, his ferocious skills bringing a new aspect to their sound. Studio work also saw Anders Bo (Medina, Celina Ree) adding his guitars craft before Carsten Christensen joined more recently to complete the band’s line-up. Last year saw Forever Still playing Denmark’s Nordic Noise Festival as well as being selected as one of the top 5 bands to play Germany’s biggest dark festival, the M’era Luna Festiva as well as the creation of their debut EP with legendary producer Flemming Rasmussen. Mastered by Troy Glessner (Underoath, Kitie), Breaking Free provides four tracks with the potential to send Forever Still to the forefront of recognition and attention.

As soon as The Key opens up its sinew clad melodic arms you sense something intriguing is pending, a feeling soon confirmed

as the first electro caress is joined by lively rhythms and feisty riffs. It is the stepping forward of Schønning where things really come together, her seductive yet formidable voice cupping the ears as bass and drums court and temper her elegant narrative. It is an enthralling encounter which only increases its lure and weight the further the band ventures into its depths. A simple yet potent hook lights the way as emotive textures and provocative harmonies expand their persuasions, the song becoming increasingly catchy yet dramatically emotive before taking its leave upon an unexpected and thrilling raw roar from Schønning.

The excellent start is instantly backed up by The Last Day, another magnetic electronic beckoning calling in an immediate appetite. Once again riffs and rhythms craft a frame which encloses invitingly around the ears whilst offering quiet intimidation. Within its hold colour rich sonic hues and flaming melodies paint a tender, drama driven premise, Schønning impressing yet again to suggest she is one of the rising presences of female fronted and melodic metal. The merging of tones and emotions in to her delivery is bewitching especially when being skirted by a snarling electronic presence within the song. It is the mixing of elegance and predation, vocally and musically though which completes the capture of the passions, that ability bringing a living breath to each unpredictable, but wholly enthralling track.

Towards The Edge comes into view on a weave of muscular endeavour and almost voracious intent before soaring on the combination of Schønning and gentle keys into air and imagination. Entwining and seamlessly moving between the light and dark of the scenery sculpted by the band, the track is a glorious adventure adding another layer of enterprise and magnificence to the sound and presence of the band.

Completed by a live acoustic version of The Last Day, the Breaking Free EP might just be three individual songs but potently declares Forever Still as the real deal and a band destined to rich and influential horizons. They have something different to the rest of the like flavoured bands, a hunter of an adventurous essence which can only broaden and deepen ahead.