Home › Interviews › Dark realms and shadowed emotions: an interview with Déhà of We All Die (Laughing)

Dark realms and shadowed emotions: an interview with Déhà of We All Die (Laughing)

The union of musician and composer Déhà (C.O.A.G., Maladi) and vocalist Arno Strobl (Carnival In Coal, 6:33) for the project We All Die (Laughing) has resulted in one of the most extraordinary experiences and towering creative tempests of recent times. Consisting of a single thirty three minute track sending the listener on a continually expanding landscape of emotionally drenched progressive dark metal, the Kaotoxin Records released Thoughtscanning is a powerfully provocative and enthralling immersion for thoughts and emotions. Keen to learn more about the project we took up the offer to talk with Déhà, questioning him about the band and album as well as news on his other projects.

Hello Déhà and thank you for sharing time with us so we can dig into the creative world of We All Die (Laughing).

The first question is obvious, how did the union of you both come about for the project?

Just out of nowhere, Arno & I started to discuss with an artist/fan relationship because I am a huge appreciator of Carnival in Coal. I talked to him about my different projects and I sent him the first demo of WADL back then, he fell in love and we decided to make this true!

You both guested on The Deceit EP from Eye Of Solitude; was that actually working together or just happened to be both appearing on the same song?

Well… I kinda forced my appearance on that song, haha! I was recording Arno’s voice for this song and I was like “oh fokdatchit, I’m going to scream a bit and in any case, they can remove my stuff” and they liked it really much! Funny fact it was before we released the album so many people were just asking “what the hell is “wadl” ?” and that was someway a good thing.

So We All Die (Laughing) is the first time you have intensively worked together creatively then?

Exactly. And that was fantastic. We understood each other without a need to talk or else.

Was there a particular spark which brought the actual project to life and specifically determined its direction?

That “power” we have together was the sparkle that started the fire. This mood we had was just “the” stuff we needed.

A bit of a naughty question 😉 but has each other’s music been something which has thrilled and inspired your individual passions or has it been more an encounter which has artistically impressed without lighting feverish emotions?

As for me, despite everything you might hear on this album, I was not inspired by any other music at all. This is emotion, as cliché as it sounds…

A quick mention about your other bands/projects if we may; 6:33 has been a lustful passion for us since discovering Arno and co through the Giggles, Garlands & Gallows EP in 2012 whilst admittedly it has been only recently with C.O.A.G and Maladi that we have been drawn into the imaginative aggressive fire of yourself, Déhà. For you is there anything from those and other of your projects which have helped spawn or inspire some of the We All Die (Laughing) sound?

Absolutely not. The most “influential personal band” on this album might be some “imber luminis” stuff (an own project of mine) but it’s not even that hearable.

You have just released the extraordinary Thoughtscanning, your stunning one track epic debut album. How have responses 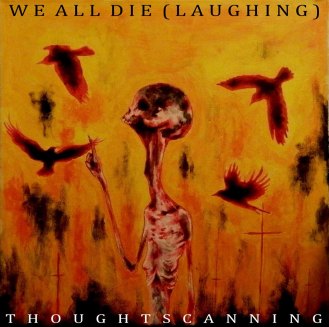 been and have they matched your expectations?

We have absolutely nice reviews all over the world and this is really great! I was not expecting that much positive reviews as the music’s complex, but I am really happy and grateful!

I will be honest and we said so in our review that a single thirty minute plus track was a daunting and initially not the strongest lure…that was until we plunged into its depths for the first time.  Did you have worries about a similar fear and maybe assumptions about a single track album scaring people off or was that something which never crossed your minds?

It did, but I am used to composing long tracks for one purpose : the trip, the journey given by the music has to stop only when we state it. And this album, even if lyrically divided in parts, had to be one song because it’s a circle closing on itself. And we wanted to keep it that way.

Was the release always planned as one piece of music?

Thoughtscanning is an enthralling, intimidating, and breath-stealing adventure, certainly challenging but equally a virulently stimulating and dramatic journey for the emotions and imagination. Tell us about the premise behind the album and its theme.

It’s emotion. I won’t say it’s the purest emotion I might release, since I have different projects and bands for my different emotions, but WADL is mainly this constant struggle between you and yourself, wanting to be healed and at the same time, you don’t want to be healed, you’re tired, or else. It’s a cliché, but to hell with it. People are all clichés.

How did Thoughtscanning emerge; did it grow and come to life as we hear it on the album or was it more like a movie, scenes created and recorded in random order to be shaped after into the sonic narrative we are confronted with?

From the beginning until the end, I would fuse your two metaphors : It’s a movie which was shot from start to finish

We imagined that the album evolved right up to its final moments, is that the reality or did you have it in a finished state before recording?

How long did the album take to create?

The Composition took one year, the voices recording took 2 months of demo & 1 week for the final recordings

The first pressing of Thoughtscanning also included an Amy Winehouse cover; tell us about that and how you approached a song which is distinctively hers?

It was our label’s idea for this song, we had plenty of choices but we never really agreed. When Nico told us about this song we totally agreed in one shot, since we’re appreciating Winehouse’s music and it was a pleasure, since her lyrics went perfectly with our concept.

Can we assume We All Die (Laughing) is an on-going project or will you be disappointing us with little or no more releases?

What comes next for We All Die (Laughing) and for you individually?

An EP, at some point, and more stuff at some point. We’re not stopping. As for my side, you can expect releases for Merda Mundi, COAG, Imber Luminis, Maladie and Clouds.

Once again thank you for talking with us.

Any thoughts or last words to inspire or provoke the readers?