ZOLTAR SPEAKS bring ‘Save As I Save’, to the 14th April‏

Rising female-fronted Brit metallers ‘Zoltar Speaks’ are geared for a reboot of their explosive debut album ‘Save As I Save’ on Monday 14th April, to coincide with widespread UK touring.
Pulling from everyone from the likes of Avenged Sevenfold and Iron Maiden to Coheed and Cambria, Zoltar Speaks are here to shake your world with a sound that merges both fiery and majestic vocals with hearty riffs and elephantine choruses.
Formed in 2009 and bursting out of the rural plains of Somerset, Zoltar Speaks are fronted by enigmatic vocalist Louise Body, with Ben Dean hammering at the drums, Simon Roocroft providing the backbone on bass, and Daniel Pratt and Jason Coles shredding it up on the guitars. The unstoppable five-piece have built up an army of dedicated followers fuelled by extensive touring throughout Southern England and Wales where they notched up supports with Idiom and Malefice. The release of the band’s debut EP ‘Treatment’ further increased their national profile, and now with the launch of their new full length album ‘Save As I Save’, the ascending metal crew are set to soar.
The south west melodic metal crew’s debut album ‘Save As I Save’ features twelve stunning slabs of cutting metal and alluring rock. From the opening piano delicates of ‘A’ and the beautifully enchanting ‘Braver’, through to the aggressive onslaught of ‘See You In Another Life’ and anthemic vigour of ‘Take It Away’, the band have delivered an absolute gem of a record. Their previous singles ‘Treatment’ and ‘Last Man Standing’ also stand out from the pack, truly lifting the album to heady heights. Now with touring in the works for the Spring and a national reboot of the album, the band’s reach is infinite.
=ZOLTAR SPEAKS RELEASE ‘SAVE AS I SAVE’ ON 14th APRIL THROUGH ALL DIGITAL STORES= 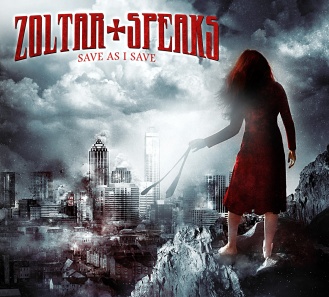