Proving a mixed bag of adventure which thrills just as openly as it raises uncertainties Encapsulate This Moment, the new album from German metallers Enfeeble, is an encounter which deserves to be investigated and allowed to offer its certainly distinct persuasion. At times the album exhilarates and has you almost running to share its promise and potency but at other moments the album just as easily has you flirting with frustration. There is no question of the thirteen track blend of melodic and heavy metal with metalcore predaciousness being a bad album just one which either does not see or simply ignores its actually quite compelling potential.

Formed in 2005, the Lingen quartet has built a fine reputation within the German underground scene without not yet breaking through to wider climates. 2007 saw the release of their debut album Too Ugly to Show it! whilst the band continued to draw and excite live audiences with their sound and stage attack. Now almost seven years on the foursome of vocalist/guitarist Lucas Brinker, guitarist Pascal Stafflage, bassist Klaus Boven, and drummer Christopher Grüner stand poised to venture into a wider landscape with Encapsulate This Moment, a release which just might achieve that intent though not as forcibly and potently as it might have.

From the elegant and appetising melodic Intro, the album explodes into an initially thrash spawn metallic onslaught as Shock 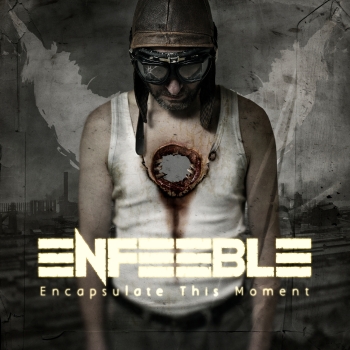 Me unleashes its fury upon ears and senses. It is a tremendous ravishing which gnaws and smothers the senses as the insidious hardcore squalls and toxic growls of Brinker, aided by those of Stafflage, prey on the psyche. Entwining less intensive moments for brief respite within the voracious tempest, the song shows the imagination and craft of the band, their spirals of sonic endeavour catching the eye within a rhythmic provocation and passionate causticity driving the attack. It is an outstanding start raising great hopes and anticipation for the rest of the release.

Those reactions are soon offered contrasting doubt through the following Personage Collapse, though its opening persuasion is impressive enough to match its predecessor. It is when the clean vocals venture into view that things take an unexpected detour. Vocally the harsh abrasive deliveries are outstanding on the album and never put a foot wrong but the clean delivery is not of the same breeding. There is not anything excessively wrong with the cleaner deliveries and certainly in a group union they work well but they just do not fit in the landscape of the songs, feeling out of place and a constant anti-climax which at times transfers to the rest of a track’s aspects. The song itself provides impressive twists of invention and persistent skill but is sabotaged by that side of the vocals ultimately.

Both Flashedever and Cavity Door brings things back on course if without matching the opener, the first stalking and enticing with acidic grooves and predatory riffs before uncaging a hardcore abrasion which riles up the passions into a greedier appetite. With bulging rhythms and thunderous riffery aligned to similarly oppressive intensity, the track roars and lurches with pleasing results, the vocals equally as resourceful and positive in their suasion. Its successor goes straight for the jugular from the start, brawling vocals and threatening rhythms driving hard whilst the cantankerous riffery sprawls over and sears the senses. It is an uncompromising and pleasing blaze which works at very angle apart from again the clean vocals which this time only make brief contributions to leave no lasting interference in the song’s success. It should be noted that the use of the cleaner delivery is a good idea and contrast in the songs but just needs a more accomplished vocalist in that style and Brinker sticking to the dirtier side of the suasion which he is unrelentingly impressive at.

The following Cries is a fierce punk bred slice of metallic savagery which has flaws but generally works with great guitar craft and rhythmic viciousness whilst the short instrumental The Last Night Before provides a peaceful beauty which maybe is unsure of its purpose in the passionate scourge of the album but reveals more of the imagination and adventure of the band in thought and songwriting. Its calm is soon consumed by the unbridled severity of Reality Loss and the exhausting malevolence of Agony Revenge, the pair rippling with guitar invention and sonic potency which is unafraid to surprise and intrigue but both caught by the same kind of doubts. Neither have that spark either to set them aside of the rest but still impress and cement the belief that Enfeeble is a band with the potential to leave us open mouthed.

The Creation and A Million Voices next provide masterful if not exactly explosive bait for the senses before stepping aside for the best track on the album, False Faith. Immediately prowling and courting the senses with the confidence of realising its majesty in the scheme of things, the track provokes and incites with an antagonistic jaw of sonic grazing and rhythmic battering whilst vocally Brinker unleashes rabidity to his attack which is as riveting as the sounds around him. It is a mouthwatering piece of invention and passion where even the clean tones work perfectly and keys seduce from within the torrid fire of the aggression. The song easily show the lost opportunities elsewhere which does not help the album’s cause but also shows why we suggest despite our issues with them, that Enfeeble is a band all should make an acquaintance with.

Encapsulate This Moment ends on the ballad As We Were Like, a song which is simultaneously raw and majestic whilst Brinker like raising a middle finger to our previously grievances excels in his heart felt delivery, clean notes soaked in emotion matching the beauty around him. It is a fine end to a good album which could have been better, but one easy to spend plenty of time with. Enfeeble is a definite force in the making with just some retuning needed to take them to the next level.