Destrage – Are You Kidding Me? No.

Destrage is a force which confronts and seduces the imagination with such an exhaustive vivacity of sound and adventure that it becomes a proposition which has you simultaneously confused, bewildered, and thrillingly basking in a maelstrom of sonic alchemy. Hailing from Italy, the band has forged an impressive and unforgettable once bitten presence which is ascending into more fevered attention release by release, but it is the release of new album Are You Kidding Me? No. which feels like the trigger into worldwide recognition and ardour with its Metal Blade Records release. With more flavours, styles, and imagination than a carnival in Rio, the release turns a band which was still waiting to explode around the globe into an exhilarating infection of the psyche and passions with that target in its sights. With words like unpredictable and intriguing the weakest descriptions of the inventive anarchy teasing and ravishing the senses, Destrage is a ten-legged groove machine with just as many schizophrenic characters posing as songs within its latest temptation.

Formed in 2005, the Milan quintet has been on a charge of persuading and recruiting hearts at home and further afield since their first days, the current line-up in place since 2007 especially stoking those the fires. From their first demo Self Id Generator, Destrage has continued to evolve into a aurally spectacular provocation, the albums Urban Being of 2009 and The King Is Fat’n’Old the following year potent bait greedily devoured by more and more willing souls, though you suspect it will be nothing compared to the awakening sparked by Are You Kidding Me? No. Live too the band has left wasted bodies and hungry bodies in their wake, the undertaking of tours across Europe, Japan, and numerous festivals and shows where they have shared spaces with the likes of Every Time I Die, Parkway Drive, Red Hot Chili Peppers, Parkway Drive, Hatebreed, Unearth, Municipal Waste, Sick Of It All, Freak Kitchen, Monuments, Jeff Loomis, Penny Wise, After the Burial, Puddle of Mudd, August Burns Red, Enter Shikari, Caliban, Lordi, Moonspell and many more, increasing their stock. The new album though feels and sounds like their time to lead the pack has now come and it is not a moment too soon.

You may be wondering what the band sound like, which we will endeavour to reveal song by song, but suffice to say it is 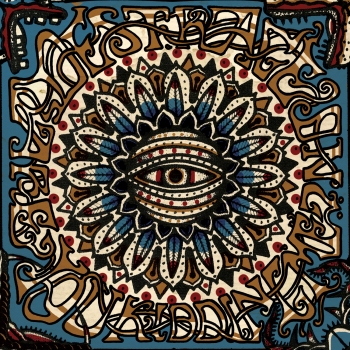 wonderfully something quite impossible to label. Opener Destroy Create Transform Sublimate tells you all you need to know about Destrage and whether to unreservedly embrace or stand scratching your head over their voracious experimentation and invention. The track opens with a spiral of sonic enterprise courted by aggressive riffs and combative rhythms, the mix alluring and intimidating in equal measure. It is not long before the song is throwing off any restraint to stomp with entwining essences of groove and funk veining a still voracious assault of technical and carnivorous metal. The impressive vocals of Paolo Colavolpe are just as eager to tempt and savage as the music with a delivery as wide as the range of sounds around him. The song aggressively dances like a fusion of Jane’s Addiction, Red Hot Chili Peppers, American Head Charge, and French band Mucho Tapioca, but even with its gait it switches and shuffles its suasion without notice or care.

With a climactic finale which simply thrills and enthrals, dub and techno added to the spice cupboard of the song, the towering opener is swiftly matched in quality and psyche twisting grandeur by Purania. From a charged entrance of rapacious riffing and similarly hungry rhythms, the song settles into a melodic bordering mellow stroll which lasts just the length of the impatience the band has to light the touch paper to another maze of eclectic sonic fascination. Imagine a hybrid of Mr. Bungle, Dillinger Escape Plan, 6:33, and System Of A Down and you get a glimpse of the beauty and schizophrenic glory of the song, a triumph within which the guitars of Matteo Di Gioia and Ralph Salati craft a narrative and web which bewitches and challenges, their hypnotic mix of creative frenzy and skilful acidic elegance spellbinding within the predatory frame built by bassist Gabriel Pignata and drummer Federico Paulovich.

My Green Neighbour rifles ears next, its first breath a frantic tsunami of beats and riffs courting a bedlamic mind-set. Forcing its agitated psyche and attack into a smoother flowing blaze of heavy and melodic metal, the song takes little effort in replicating the temptation of its predecessors, merging varied flames of sound and persistently captivating detours into a brawling riot of invention and insatiable metal manipulation. The stunning tempest then has to step aside for the more primal bordering bestial presence of Hosts, Rifles & Coke, its heavy throated savagery magnetic and even more tantalising when it shares time with a contagion of melodic prowess and mouth-wateringly catchy choruses, all seared by a scotching solo to top things off.

Both the discordant and masterful mayhem of G.O.D. and the smoother voiced mesmeric Where the Things Have No Colour unveil new scenic aspects of the Destrage’s songwriting and imagination; the first a riot of Faith No More meets Ugly Kid Joe voraciousness aligned to a mind tripping sensibility and the second a progressively honed melodic venture through rapturous harmonies and exotic melodies within an irresistible toxin of craft and infectiousness. Arguably the track is the band at its most restrained artistically but certainly no less potent and imaginative as well as exciting.

Waterpark Bachelorette has the band squalling and rioting over the senses, grooves and lethal rhythms a blistering endeavour matched by the predacious expulsions of vocals and sound which litter the rampant torrent of rock ‘n’ roll. Guitar doodling veins the song for only the most satisfying results whilst the addictive anthemic call of vocals and hooks make a lingering bait which seeps into the breather of melodic caresses and sonic entanglement. Its excellence is soon equalled by firstly the dramatically textured Before, After and All Around and the almost hysterical invention of – (Obedience), the track verging on maniacal with its avant-garde/melodic metal ants nest of busy yet ordered chaos.

To prove that the song is still not the deranged imagination of the band exhausted the closing title track takes all honours on the Are You Kidding Me? No. Featuring a guest appearance by Ron “Bumblefoot” Thal (Guns’N’Roses), the track is an inventive meshuga but one which knows exactly what it is doing. Fusing experimentation, jazz, funk, and pure dementia into its unrelenting crazed waltz, the track is a triumph of insanity which disorientates and seduces with perfect touch and irreverence. Ending on a sensational emotive stomp of gypsy punk with swing desires and reminding very much of Kontrust and another French band Toumai, the track is a magnificent concluding revelry to a quite brilliant and monumental release.  Quite simply Destrage has provided your probable album of the year.