World addressing furies: an interview with Jost Kleinert of Lay Down Rotten 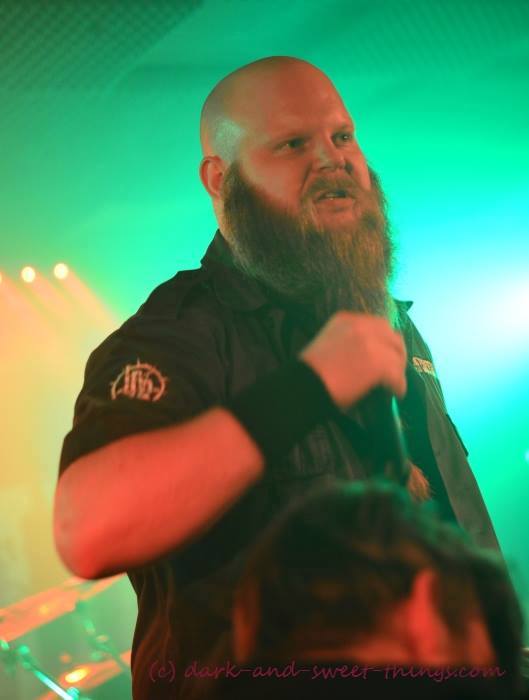 For fifteen or so years German death metallers Lay Down Rotten have not only persistently unleashed formidable barbarous provocations to inspire and corrupt the senses but with each pushed their and the genres limits and fears into heavier and darker tempestuous depths. Their recently released new album Deathspell Catharsis is no exception, the release a brutal and inventive fury marking the band’s first release with new label Apostasy Records. Keen to find out more about we had the pleasure to talk with vocalist Jost Kleinert about the history of the band, their impressive new album, keeping the intensity of passion after so many years on the frontline and much more…

Hi Jost and welcome to the site, many thanks for taking time to allow us to look at your new album.

Just before that though can you give readers new to the band a quick background and history to Lay Down Rotten?

We are a Death Metal Band from Germany and we are proud of having our 15th band anniversary this year. We released 7 albums so far. Our current release is called Deathspell Catharsis and combines all features we are known for on one hell of an album. We love the melodies of 90s Swedish Death Metal and the impact of Old School Death Metal. This is what we stand for.

You just mentioned new album Deathspell Catharsis, a beast of an encounter. What are the feelings and hopes for it in its early days since being uncaged?

First of all we hope that the audience likes it as we always give our best with every release. So far we got great reviews, our release concerts were a blast and the feedback is just awesome: fans and critics praise this album. We want to play as much as possible to promote Deathspell Catharsis. We play a tour with the legendary Massacre from May 6th to 10th in Germany in cities such as Dresden and Hamburg. Then we are confirmed for festivals. Please check out our official website www.laydownrotten.com and our Facebook page. Press the like button and be a part of the growing Rotten Army!

It is the successor to the excellent Mask Of Malice, an album which was for us a barbaric and aggressive ‘shot in the arm’ for

death metal but arguably lacked that unique spark of adventure. Deathspell Catharsis has that adventure and more within it’s again senses obliterating malevolence and invention. How do you see the differences between the two albums?

Mask Of Malice is a very dark album…Brutal and honest. It still represents an episode in our band history that was very important and I don’t want to miss this experience. Mask Of Malice includes for example one of our favourite tracks Hades Resurrected which we shot a video for and love to play live. Deathspell Catharsis is more open and outgoing. The aggression is on the surface. We do not hold back on this album. This is the essence of all our releases so far and we wrote songs that reflect our status as a band and our personal view on this genre. We love what we do and feel inspired by every aspect of this scene.

Widening the gap, how would you say your sound has evolved since the early days and releases of the band, fifteen years ago?

We have become more experienced and we are proud of our standing, stamina and history. We as a band know exactly what we do and we are still hungry for new challenges. We don’t need external aid to achieve our goals. As far as the sound is concerned we have developed our own style and approach.

Numerous bands enjoy a similarly lengthy career but seemingly lose their snarl and bite over time, something Lay Down Rotten has avoided. What keeps that aggression and predatory hunger alive in the band and its songwriting?

We are still curious and want more…More albums, more concerts, just more of everything. And we are still pissed off. Pissed off by the zeitgeist and the state the world is in. Moreover we are very dedicated and love to be a part of the Death Metal universe. I am still a fan of bands like Akercocke, Woods Of Ypress, Morbid Angel, and Edge Of Sanity. Nothing has changed. I have not changed. I still feel the adrenaline and I am still looking forward to playing live and being on the road.

What have been your biggest inspirations and do they still provides seeds of thought or has that changed over time?

Life itself, experiences we went through, episodes in our band history and of course books we have read, movies or other bands that gave us some inspiration.

How long was Deathspell Catharsis the making and did you approach it any differently to your previous full-lengths?

It took us three weeks to record the album and two months of writing the album. We developed a certain routine over the years. So we enjoyed the making of this record very much. We again entered the Desert Inn Studios to let T-Low produce this album. He is such a great guy and producer. We trust him and he knows us as he produced six of our albums. That was a walk in the park. It is very rewarding to work with people that have been supporting Lay Down Rotten for many years.

Not being a musician I assume every record brings something new to learn for an artist, what new things did you learn and find out during the making of Deathspell Catharsis which you can employ ahead?

Dedication and humility. Every album should be a new attempt to give your unique best. Second best is never good enough. Mediocre bullshit won’t do it for us. We challenge ourselves with every album to explore new ground without losing our profile. This is what makes it hard on the one hand but very exciting on the other hand. In the end every band has one purpose: to entertain. We entertain by being in honest in our passion for Death Metal.

How did you approach the studio time with the album and are songs pretty much finished when going into the recording process?

We are prepared. Time is money and to keep up a good work ethic it is important to be focused and ready when going to the studio. All the songs were finished and well-rehearsed.

As you mentioned you recorded Deathspell Catharsis with producer Thilo Krieger again, he is like an unofficial member of the band? What is it in him that reads your needs so well?

He knows the band very well. He knows how to create a suitable sound outfit and is experienced. Thilo is very disciplined and focused on the outcome of the studio work.  Sometimes it is hard for a band while recording. You stand too close in front of the mirror so that you cannot see anything. This is where a good producer comes in and puts things in the right perspective. We cannot thank him enough… Always a pleasure working with him.

We can pick out particular moments which get our juices especially flowing: the march of commanding hungry rhythms and riffs in The Fever, the malevolent dark bass prowl in Schädelberg, and the whole stalking presence of Among The Ruins Of A Once Glorious Temple, just three examples in an album which leaves the senses breathless. Is there a particular moment which gives you a certain tingle too?

Of course, for me every song has some kind of magic itself. For example the beginning of Cassandra’s Haunting gives me chills every time we perform this song. Then there are the lyrics for Schädelberg that just burst out of me in a hellish anguish on stage. We just poured our all into every song. So that may last forever. Every time we perform one of the songs memories come alive.

Tell us about the outstanding artwork for Deathspell Catharsis, how strong was the band’s input in this?

The artwork was done by Toshihiro Egawa who also did the artwork for our previous album. He and our guitarist Nils worked out the concept and completed the artwork together. This artwork combines scenes of the songs and shows the essence of Deathspell Catharsis. We are pretty pleased with the result and the great feedback from the fans who seem to like it very much.

The album is your first with Apostasy Records, how does this new home for Lay Down Rotten differ to previous ones like Metal 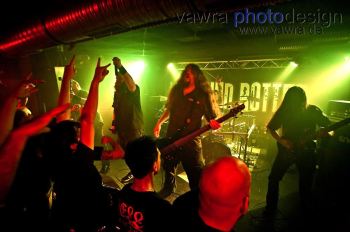 It just felt natural to join forces with Apostasy records. Always go with the flow…Sounds cheesy but it is as simple as that. Apostasy Records are very professional and put a lot of effort in promoting the album and supporting the band. We are very happy with their work.

Are you a band which looks back at previous releases with a critical eye to learn from or one where once an album is out and promoted to its limits looks primarily ahead confining older records to history?

Never look back. You live and learn. I cannot change the past but I can fight for a better tomorrow. We always had great support and are very grateful for that. We are looking forward to experiencing all that may come with the promotion of Deathspell Catharsis. With every album we learn something different. We do not have great expectations. That makes it easier for us to go on as we lay our focus on great live shows rather than dwelling in the past, regrets and just bullshit. And after this album a new album will come. So there is always something to look forward to.

How has metal intimately changed for the band and its experiences over the last fifteen years?

Trends will come and go. Authentic music and musicians will always stay. That is all I can say. And there is nothing wrong with that.

What does Lay Down Rotten have in store for the coming weeks and year as a whole?

The aforementioned tour with Massacre is one of the highlights we look forward to. Then we will play festival gigs as many as possible and we just released a fantastic video for the song The Fever. Check out our YouTube channel and get smashed.

Thank you again Jost for chatting with us. A last thought to leave the readers with?

Support your local Death Metal scene and go to club gigs. There are many great newcomers out there. Please check them out and give independent music a chance. Check out our homepage for all the important news and our previous releases.