Though UK rockers Kodiak Jack has not exactly been a secret it is fair to say that they have yet to ignite the widest attention across the country, something they will surely address as new album Alhambra starts its rampage. Built on eleven irrepressible inventive slabs of prime rock ‘n’ roll , the album is an incendiary fuse for the imagination and passions, undiluted heavy rock which thrusts the band to the fore of not only British but European rock music. With raging sonic endeavour around infection clad hooks and intensive riffs, all strapped to a rhythmic enticement which refuses to take no for an answer, the beast of a release is the kind of feast you can never stopping licking your lips to.

Hailing from Portsmouth, the quintet first drew keen attention with debt album Your Death: My Glory in 2011, the release becoming no stranger to acclaim from fans and media alike. Strong radio play followed as well as the record having tracks featured on the cover mounted CD of an international edition of Metal Hammer, used on the closing credits of Eurosport’s British Superbikes coverage, and part of the States released Rumble Rides: Muscle Drag DVD . Their live reputation equally has earned the band a big reputation, shows with the likes of Kobra & The Lotus, Paul Gilbert (Mr. Big and Racer X), Everything Everything, Elvis Jackson and many more only confirming the emerging might and presence of Kodiak Jack. Recorded last year in Sacramento, California with Tesla bassist Brian Wheat who became a fan when the band sent him their debut back in 2011, Alhambra takes it all to the next level; actually up a  good few levels such its tremendous power and enterprise. 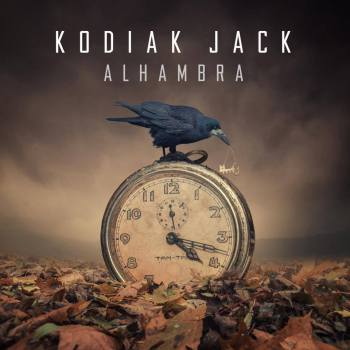 exploits, Alhambra takes no time in firing up the appetite with opener Get Out Alive, guitars dangling an initial temptation before thumping rhythms splinter their bait aside the vocals of frontman Bryn Roberts aided by those of guitarist Jon Karp. Into its stride the track brews up a rousing contagion which it accelerates further with storming riffs against melodic flames from Karp and Jeff Arnold, whilst the bass of Kev Farren stomps alongside the equally hungry beats of Keiran Bellinger. It is a roaring blaze of hard rock setting the release off in fine anthemic style, sparking an immediate greedy appetite.

The first single from the album Brother steps up next, again no second wasted on lightweight beckoning as heavy riffs and crisp rhythms immediately set to work on the ears. A grunge feel emerges as the song expands its sonic narrative, a winding groove seducing the senses as the vocals of Roberts again impress with a Glenn Danzig essence coating some of his delivery. A strong acidic solo also spears the song towards its end to raise extra temptation before a dramatic finale makes way for the equally riveting and impressive Wasted Youth. Roving beats join scrapes of riffs alongside the opening narrative of Roberts as the song sets its irresistible toxicity in motion first, before hitting a similarly enthralling and magnetic passage of melodic passions pulling virulence. There is a blues flame to the guitars which only accentuates the swagger and addictiveness of the song too, it an early pinnacle in already a heady range of peaks.

Both More Than This and Crossfire keep album and reactions sizzling, the first once again employing the greediest rhythms within an expansive wash of sonic causticity and expressive vocals whilst its successor has a broader rock wash to its earnest declaration. The pair stroll a level below what came before but with undeniable craft and the passion to inspire, neither leave anything but thrilled satisfaction behind before the outstanding THEM takes over. It almost nags at the ears from its first breath, riffs and beats a persistently probing trap beneath the wider rock delivery of Roberts, again perfectly assisted by Karp. A tinge of glam rock mischievously grins in their and the music’s incitement to tease just a little more and like so many of the tracks it secures a swift tempting for feet and voice which only the deaf and dead could resist.

No Surrender is just as epidemically riotous and catchy, Karp and Arnold sculpting a sonic playground for the vocals and the more intimidating rhythmic section to prey and incite within, whilst the brilliant Waves with its heavier almost carnivorous presence stalks the senses with a predation which is dangerous and drenched in irresistibility. The compelling quality keeps coming on strong as firstly the masterful Live To Fight unveils a drama driven melodic rock pyre of emotive balladry and La Rue follows it up with a muscular impact of passion stirring energy and bordering on antagonistic craft, melodies and harmonies unafraid to seduce with every note and syllable.

Completed by debatably the weakest song on the album, Coming Home, though that is down to the quality of the rest of the release than real short comings it may have, Alhambra is a rock album setting Kodiak Jack as one of Britain’s strongest and masterful rock bands but also declaring them as a new big noise in hard rock full stop. For those with a taste for Velvet Revolver and Guns N Roses, through Stone Temple Pilots and Alice In Chains, to Blackstone Cherry and Thousand Foot Krutch, and everything in between and around them, this album is your new best friend.