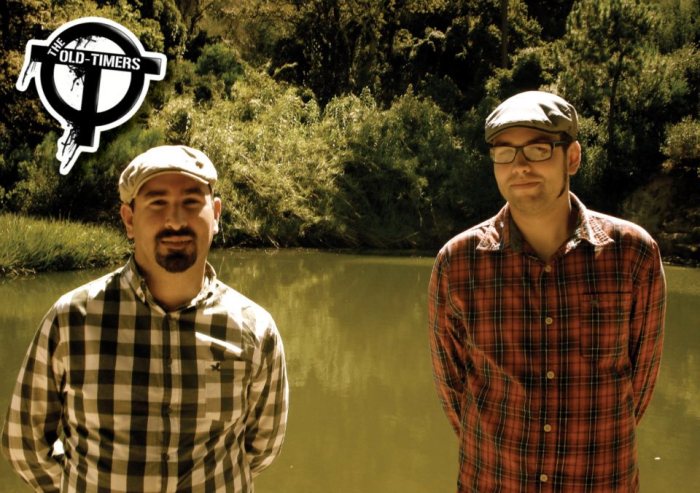 Following up their impressive and enjoyable debut 2012 album Soli Deo Gloria, South African punks The Old-timers release new EP Spiritus Sanctus, a proposition which continues where the last left off with another clutch of inventive and passionate hardcore punk encounters. As their previous release the trio fill most of the tracks on the EP with praise to God and his son, challenging wrongs and thoughts with their narratives. Lyrically there is no subtlety and reserve in the presentation as previously shown on the album but equally there is the same wealth of tasty punk endeavour to satisfy those not so interested in the lyrical contemplations, making the EP an adventurous slab of prime punk for all to enjoy.

Consisting of Cape Town vocalist Dave Emerson, Port Elizabeth guitarist/bassist Donovan de Necker, and Californian drummer Matt Lagusis, The Old-timers seeds begin in 2011 with the meeting of Dave whilst on holiday with Don in his home town. Strong friendship led to a creative union of the two with technology providing the link over the vast distances between them and subsequently Matt (False Idle) who joined the band after the release of their first demo. That release, Punk’s Not Dead! Nor Are We! brought the band to the attention of Christian Punk label Thumper Punk Records who released the well-received full-length Soli Deo Gloria and now unleash the band’s new encounter in tandem with Veritas Vinyl.

Opener Mammon relatively gently scraps with the ears through an opening stroking of riffs and spoken vocals, both setting up

attention and appetite for the passionate rabidity to come. As the track provokes and rallies up thoughts with its intensive yet controlled assault there feels a greater intensity and voraciousness to the sound and delivery. It is not a metallic rapaciousness which hits the imagination and senses but certainly the suggested more thrash bred hardcore feel to this and other songs, as suggested to us previously by Don, makes itself pleasingly known.

From the more than very decent start On My Knees Again deepens the tone of the sounds with a heavier darker  snarl to bass and guitar whilst the drums and vocals score the senses in fine if unsurprising style. The track still builds bait and a potent coaxing across its angry stretch which only feeds the hunger for good punk rock with its enterprise and satisfying craft. Its strong place though is soon put in the shade by the excellent and fun Goonies Never Say Die!, a riotous slab of anthemic punk with restrained but infectious hooks and potent rhythmic temptation all irresistibly luring the passions within a canvas which is less than a minute long. From its deep appeal things continue with equal success through Joe #1, a song which has essences of Shelter and the Subhumans to its stirring and evocative charge. Again hooks entrench themselves irresistibly in the imagination whilst riffs and rhythms crowd the ears with excitable and rampant enterprise as a good variation of vocals suggests the lyrical intent of the song. It is an excellent and energetically captivating encounter taking best song honours on Spiritus Sanctus.

Love Alone Is Strength returns to a face to face eyeballing hardcore attack, vocals scowling out every note as riffs and drums barrack the ears. It maybe would be an over ripe provocation even in its again very enjoyable short presence, a minute once more barely pushed, but veined by a teasing acidic treat of a hook and that ever eager voracious energy the band craft another highlight of the EP. It’s potency is matched and surpassed by Carpe Vitae Part II, a storming blaze of old school punk  with a taste of seventies bands Crisis and Crass to it as well as that repeating flavour of Shelter though to a lesser extent than before. Both songs show an invention and evolution in the sound and songwriting which is certainly subtler in other songs but makes a promising turn in the growing of the band.

The closing Axios provides a final feisty gallop of hardcore punk with its healthy arsenal of contagious hooks and irresistible energy for a song very easy to devour and with relish. The song is raw and accessible providing something for all punk needs as does Spiritus Sanctus as a whole. The release pushes on from the band’s excellent album, not in big strides but definitely with distinctive confident steps which makes The Old-timers a meeting all punk fans should eagerly consider.