Home › Music › GIVING IN TO GHOSTS to unveil ‘Chasing Waves’, on 31st March‏

GIVING IN TO GHOSTS to unveil ‘Chasing Waves’, on 31st March‏ 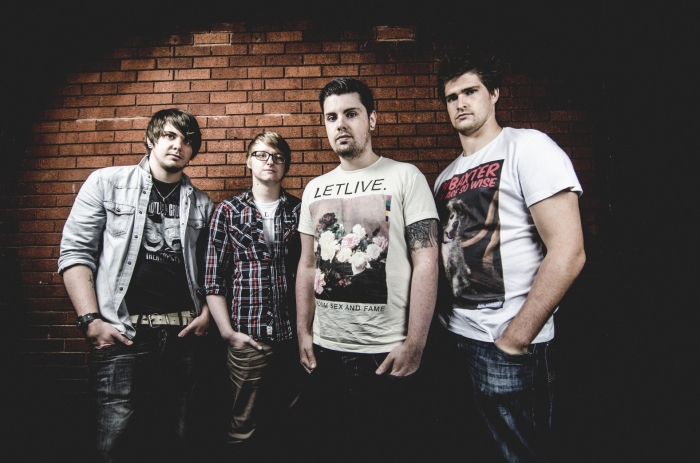 DEBUT EP DROPS THIS SPRING!
South Wales Post-Hardcore outfit Giving In To Ghosts drop their ball-busting debut EP Chasing Waves on Monday 31st March through all stores.
Blending emotive drive with defiant belligerence, Giving In To Ghosts wear their hearts on their sleeves, producing a sound that deftly merges genres. By extracting influence from everyone from fellow South-Wales icons Funeral For A Friend, to Brit bruisers Architects and cult heroes Reuben, the band’s reach and output is notably diverse.
Since their inception in 2013, Cardiff hardcore beasts ‘Giving In To Ghosts’ have already destroyed a host of fleapit venues throughout Wales and England with their boundless energy and impassionate blend of melodic hardcore. Now, after supports with Continents, The Browning, Acoda and Beneath My Feet, ‘Giving In To Ghosts’ are primed to step up with the national release of their explosive debut EP ‘Chasing Waves’.
To record ‘Chasing Waves’, the ascending four piece laid siege at Not In Pill Studios in Wales with Martyn ‘Ginge’ Ford and Matt Bond (who’s past credits include Slipknot, Trivium and Bullet For My Valentine) behind the desk. The record was completed by the end of 2013 and the result is highly impressive.
‘Chasing Waves’ is loaded with slamming guitar parts, colossal drumming, and engrossing dual vocal lines that twist and contort. The opening track on the EP ‘Rapture’ is quite simply massive and an ideal sampler for the shape of things to come. ‘Sirens’ bursts with unbridled vigour and a soaring refrain, while the record’s namesake ‘Chasing Waves’ displays the quartet’s cunning knack for stripping back the elements to deliver an engaging cut that will lodge itself in your brain for ages. As ‘To The Sun’ rounds off their striking debut with its edgy riffs and brutal drive, its clear that this record is sure to elevate the fiery tune chiefs to a national level.
= GIVING IN TO GHOSTS RELEASE ‘CHASING WAVES’ ON MONDAY 31st MARCH THROUGH ALL OUTLETS =

Like Loading...
‹ Tracings of time and reflections: an interview with Black Space Riders
SET TO BREAK poised to show ‘Redemption’, on Monday 17th March‏ ›