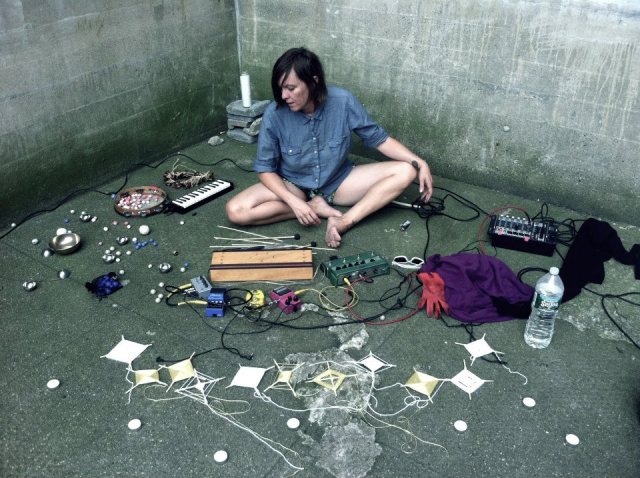 To say that Where Shine New Lights is spellbinding would not be overstating the enchantment and allure of the new album from Californian based multi-instrumentalist, composer, and visual artist Tara Jane O’Neil but it only gives one sense of the absorbing and provocative evocation going on. Like being wrapped in someone else’s reflection which is soaking up and breeding greater evocation from your own, the release is a maze of striking textures and tantalising explorations creating a journey and landscape which draws and immerses the imagination in an unique experiment. The album is an irresistible seduction but one which equally challenges the psyche and emotions with its absorbing breath and permeating radiance aligned to a sonic discord bred lucidity.

The Kranky Records Where Shine New Lights is the artist’s seventh solo album in a musical career which has seen her as a founding member of Rodan, amongst other projects, and part of collaborations with a wealth of artists including Ida, Mirah, Jackie O MF, Mount Eerie, Papa M, Come, and Nikaido Kazumi. In addition her visual art has graced galleries all over the northern hemisphere whilst O’Neil has received four monographs. As boldly evident on Where Shine New Lights O’Neil has a freedom to her composing and music, an unrestrained and uncaged invention which is unafraid to search the darkest and deepest corners of herself and everything around her whilst coaxing out the beauty, hope, and passion of the same sources.

The album opens with Welcome, a short piece of floating vocal harmonies and simmering melodies which caress and seduce

the air without disturbing its tranquillity. At its seamless evolution into Wordless In Woods a sonic shadow edges into view and remains, tempering the following beauty of song which follows. O’Neil’s voice is as charmed and sirenesque as the sounds wrapping its uniquely enrapturing narrative, the blend inspiring the track to avail its warmth and sensitivity to all. There is a hidden bounce to the song, it seemingly swinging across the senses without raising gait or temperature, something which is less shaded and equally as magnetic in the following This Morning Glory. It is a sublime and sumptuous embrace which transports the imagination into its own disconnected yet emotively honed visual interpretation. The sultry climate of the song through the guitar and harmonies raises a bead of sweat on the metaphorical brow and a smouldering flame in the passions with its quite glorious croon.

The rhythmically cast and almost shamanic Over. Round, In A Room. Found. comes next and again has thoughts and passions burning with a fiery hunger. Hypnotic and transfixing in its simplicity and dramatically textured reserve, the song is mesmerism at its most potent with the vocal sounds of O’Neil another instrument in the unveiling landscape which expands and then diminishes its presence as it evolves into the haunted arms of Glow Now. The captivating and sinister ambience brewed within the new piece seeps into every thought and emotion sculpting a state of emotional limbo but a feeling enriched by hopeful and rich melodic hues soaking its breath.

Through songs like The Lull The Going, a tender and bewitching echo of deeply fed emotions, the equally beguiling and poetically harmonic Elemental Finding, and the dark dredging alchemy of Bellow Below As Above O’Neil leaves emotions clasping any ‘firm surface’ whilst thoughts are pushed into places previously unknown or certainly hidden away from light. Whether a shadowed scenery or melody soaked flight, the songs on the album permeate the imagination before moving into closed off emotive depths with ease and infectious ingenuity. Before the last of this trio makes its pass on the passions, the album does take a brief lull through the songs All Now Vibe, The Signal, Wind, and The Signal, Lift. All three are provocative and inciting but do not spark the same intensive involvement as elsewhere, though you know it is not an album issue but only personal tastes at work.

The almost abstract fascination of New Lights For A Sky brings the excellent encounter to a close, Where Shine New Lights leaving ears to senses and emotions to thoughts drifting in a disturbed yet golden haze of ingenious temptation and incitement. This was our first experience with Tara Jane O’Neil but the doorway ahead and in retrospect to an aural temptress and sculptor of richly impacting reflections.