Stepping out from the punk ‘n’ roll shenanigans of the UK’s irrepressible masters of rock mayhem Dirt Box Disco, the band’s masked lunatic and guitarist/vocalist unleashes his own project of devilry, Spunk Volcano & The Eruptions. With a sound which is irresistibly contagious and riotous, Spunk and cohorts are poised to release debut EP called simply…EP on February 1st. Though arguably not a major departure from the DBD sound, the release provides a leaner and debatably stronger old school bred persuasion which emerges with a distinctive presence through five tracks of unbridled punk rock virulence, or as they call is spunk rock.

Alongside DBD colleagues, drummer Maff Fazzo and bassist Deadbeatz Chris, and guitarist Ste Lingard from Manchester based punk band Flat Back Four, Spunk has sculpted an encounter which bounces and romps with exhaustive energy and merciless addictiveness, no second of the EP refusing to tempt with salacious intent or devoid of epidemically spawned infectiousness. It is a record which if you are not physically stomping with and vocally uniting with its anthemically cast songs at some point, then deafness of death has beaten it to your senses.

The opener Sellotape makes a relatively subdued entrance, singular riffing nudging the ears before punchy beats and a coaxing 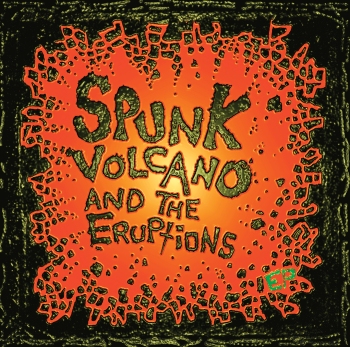 heavy bass sound move in to increase the enticement. It is not a fiery or dramatic start but rigidly compelling with a lure which increases as its intensity raises degree by degree and the great vocals of Spunk, aided by a strong backup from Chris and Ste across the release, start working on thoughts with an emotive narrative which again can be said to be a step away from the attack found with the day job. With a brew of hooks working independently and in tandem with each other and a dark menace to the rhythmic pressing, the song is a magnetic trampling through the ears and into the passions and the irresistible appetiser to even greater glories.

The Devil Spits You Out shows its intent at the start with forceful beats and a raw guitar grazing laying lures before the Spunk’s vocals start working the imagination within growing sonic flames. Finding greater potency and contagion to its senses worrying riffs and the antagonistic but affirming narrative, the track soon has feet, voice, and passions in league with its call and suasion, a power the following She’s The Girl has little problem in replicating and accelerating. Within seconds a ring of na na na na’s recruits instant submission and alliance from body and heart, its entrance taking the already ripe aural addictiveness of the release into a richer stronger brew of irrepressible toxicity. Guitars and bass grab the ears by their lobes and thrusts them into a riot of insatiable roughhousing rock ‘n’ roll whilst the drums unleash a blast of tempered yet explosive sinews to frame the outstanding group vocal provocation; the result one exceptionally dynamic and irresistible slab of rascality.

Matching its might and temptation Crossfire steps up next to rile up the passions, the song a rapacious look back at the times of real toys and the vicious board game of the song’s title, well it was violent how we played it. The band also musically dips back to the seventies, where the game was a must have alongside many other mentions in the track, to craft a roguish wash of old school punk sweat and pleasure. Impossibly addictive and demandingly anthemic, the song is a scintillatingly blast of punk ‘n’ roll alchemy. Probably the most DBD like song but again with that essence and bold character in sound and hunger to launch itself into the deepest corners of your passions and imagination, the track is another slice of mastery which makes you hope this is not a one off adventure by Spunk and the guys.

The rawer sound of the previous song is increased with a defiant nastiness and belligerence on the final song Superior Brain Damage. It has a harsher combative breath than its predecessors but does not short change on wonderfully toxic entrapping hooks and lung sapping energy. It is a towering conclusion to an outstanding explosion of the finest punk ‘n’ roll sculpting and the start of something which in the future could rival its creator’s main band in appeal and success. Released via STP Records on the first day of February and followed soon after by a five date UK tour, the EP thrusts Spunk Volcano & The Eruptions to instant ‘stardom’. To be honest using Dirt Box Disco as a reference brought assumptions that the EP would be something special, but it is nice to be proved right before being shown an even more impressive triumph which surely only those deaf or dead souls will ignore.