Winter Storm – Within The Frozen Design 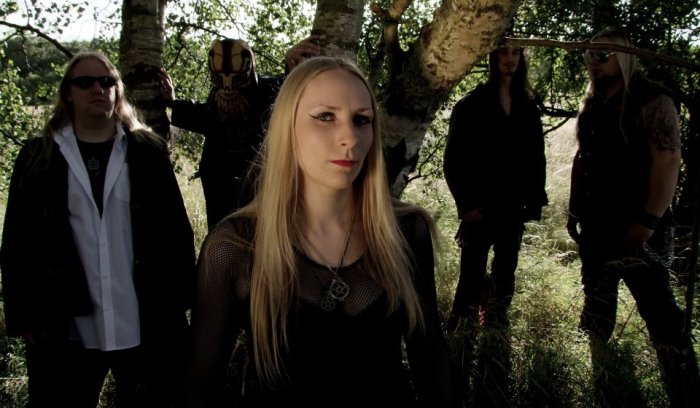 Listening to the potent and promise soaked Within The Frozen Design, you easily get the feeling that UK symphonic metallers Winter Storm are poised to move up into a more intensive limelight. Whether this, their second album is the spring board time will tell but it is hard not to expect on a near horizon to see the band making a big contribution at the fore of the genre. The twelve track release has issues which make you query if their time is quite yet but simultaneously provides an absorbing and skilful melodic embrace which only raises and stretches a keen appetite for the band and its expressive sound.

From the West Midlands, the quintet has earned a strong reputation and loyal following with their dark melodic metal, a sound honed through gothic shadows and symphonic atmospheres. Formed in 2008, Winter Storm were soon gripping attention live, supporting the likes of Alestorm, Sirenia, Theatres Des Vampires, To Mera, and Sarah Jezebel Deva early on before going on to share stages with the likes of Delain, Die So Fluid, The Birthday Massacre, ReVamp, The Lotus and many more. Debut album Serenity In Darkness of 2010 drew critical acclaim its way as have numerous festival appearances over recent years to cement and increase the band’s stature within British melodic metal. Now the strongly anticipated self-released Within The Frozen Design brings 2014 into a sharp focus for the band and its fans, an album if not setting raging fires undoubtedly reaffirms the creative strength and impressive potential of Winter Storm.

As the album title, and band name come to that, suggests the tracks frequent a chilled and icily haunting realm but one clad in 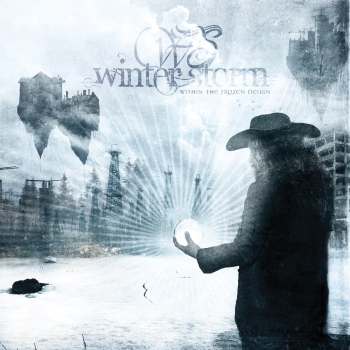 beauty and a melodic artistry which only warms. From the opening scene and drama setting intro Cold Creation, the album is soon caging ears in a rhythmic probing and brooding intensity as Wasted Feelings opens its arms. Its initial riffs seem predatory with an attitude to match the punchy rhythms barracking the senses. Equally though there is a breeze of synth colour floating over and through the aggressive touch of the track, its melodic soothing eventually tempering the snarl of the song ready for the impressive tones of vocalist Hannah Fieldhouse. Her voice is rich and tempting but with a restraint which sets her pleasingly apart from many other female fronted genre bands. The track provides an unpredictable expanse of sound and twists which without being startling in their impact only seduce the fullest attention on and satisfaction with its feisty yet elegant narrative.

The following Shadow Weaver like its predecessor makes a forceful and rapacious entrance; riffs and rhythms a cage of antagonistic intent wrapped in more keys sculpted temptation. Dark with a gothic ambience, the song again guided by great vocals flirts with and triggers the imagination as it ventures through a rugged landscape of heavy riffs and sonic enterprise. Pretty much like the album the song is a slowly persuasive encounter but one which proves its strength and quality through deliberate attention. The same can be said of the next up Symmetric Flow, a captivating wind of melodic vocals and endeavour within a sturdy and uncompromising heavy metal frame. Again the offering is not as instant to convince as you would maybe expect or like but unveils plenty to enthuse about upon closer attention. That is one of the ‘problems’ of the album, tracks do not leap out and grip preferring a slower seduction but this comes with a need to fully extend a concentrated focus on the album to reap it’s definitely existing  rewards. It is hard to be critical though even if listeners need patience when immersing in the album.

Afraid To Speak steps up next, gently wrapping a sultry breeze of melodic enchantment around thoughts if again without sparking any major reaction; that power is left to its successor Beneath The Mystery. The track also springs from a reserved start to open up sinew driven riffing and heavily striking rhythms within the keys designed eighties sounding gothic weave which feels seeded in the likes of Sisters Of Mercy and Play Dead by. It is a fiery encounter yet one which does not erupt or stretch its attributes as far as you expect or would like, again an accusation you can make on Within The Frozen Design as a whole.

After the brief but decent enough instrumental Broken World, the album undulates a little but keeps the listener enthused starting with the impressive Universal Design, a track offering another accomplished and magnetic web of gothic and symphonic metal with a bite and almost antagonistic breath. It provides sizeable bait for the senses to devour eagerly before the enjoyable if underwhelming Gatekeeper shows its class. It is sandwiched between the previous track and the equally thrilling Dark Awakening, the song a heavy footed shadowed drenched beast with radiant beauty casting ripe melodic tantalising. As elsewhere the guitar craft and imagination is an irresistible lure whilst the epic tone of the track is aggressively bewitching.

Completed by the overlong but appealing instrumental Waves Of Misery and the final slice of gothic allurement of The Frozen Siren, the album is a pleasing and enticing encounter. The cloudy production at times does the release no favours, cloaking some of the piercing strengths of instruments and voice but Winter Storm and Within The Frozen Design emerge from it with strength and quality. As mentioned earlier the album does not ignite a fire in the passions but definitely provides company which only invites the fullest satisfaction.