The Drop – Turning Around EP 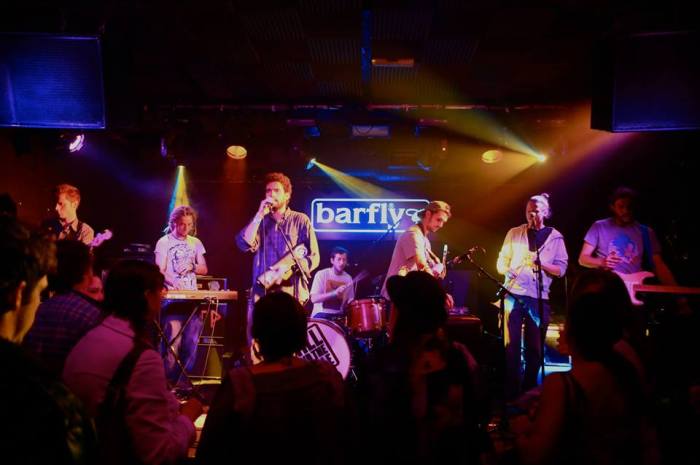 As their debut album nears completion and subsequently it’s unveiling, UK reggae band The Drop are releasing the Turning Around EP as a free download.  Consisting of five tracks to entrance and ignite the imagination it is a quite seductive tempting for the forthcoming full-length and a thrilling gift to help end the year.

The nine piece band from London and Reading began at the beginning of 2009 and was soon grabbing attention with their distinct fusion of reggae with refreshing elements of dub and rock. Their first year saw The Drop become a regular on stages across the festival circuit as their contagious and skilled employment of virulent hooks and virulent melodies within heavy reggae based imagination worked its addictive toxicity upon those before them. Since forming the band has played with the likes of as Toots and the Maytals, Lee Perry, Zion Train, Don Letts, and The Dub Pistols, supported The Skints on their 2012 sell-out UK tour, appeared at Glastonbury, Soundwave in Croatia, Secret Garden Party, and Boomtown Fair, and received strong radio play. It has led to a strong anticipation of the band’s first album which Turning Around will not exactly appease but certainly bring a temporary halt to the impatient wait though equally it could just accelerate the hunger.

As soon as the opening tease of prowling bass licks at the ears from the title track you sense something magnetic is brewing, an

assumption soon confirmed and elevated as the song seduces with a virulence which is just irresistible. With a knowing swagger to the riffs, precise bait from the rhythms, and a warm coaxing from the trumpet the song enslaves the imagination and emotions, and it has not yet got into full stride. A collaboration between The Drop and long-standing roots reggae producer and promoter Satchi Dubworks, the track is soon pouncing with greater allure with the pumped rips of guitar and tantalising keys ably backed by brass kisses, but it is the riveting vocals of Dandelion which seal the already destined to linger deal, his vocals a smooch on the ear with delicious expression coating every syllable he shares. With an eager tempo to its rocksteady romp and energy the song is sheer manna for the senses and imagination.

Up next comes CCTV, a track bred by the band from a track originally written by Dandelion and Hyperdub’s well-established production quartet LV in dubstep form. Washed in an absorbing ambience and smouldering keys crafted radiance the track slowly burns away at the passions for the fullest reception, its magnetic roots seeded breath mesmeric in touch and charm. In many ways the track feels like a mix of By The Rivers and Ruts DC, thoroughly captivating and wholly seductive.

The following Waiting For unveils a similarly transfixing offering, its bewitching weave of vocal harmonies, elegant keys, and mouthwatering trumpet heat a scintillating warmth to beguile thoughts and emotions, like a mix of UB40 with the indie incitement of a Bedouin Soundclash. Imagination floats over and through the song as it gently entices emotions and thoughts to play with its aural and vocal fascination, the song another infection dripping piece of melodic emotive alchemy.

Completed by a great dramatic yet restrained dub version of CCTV by roots veteran Nick Manasseh and a radio mix of Waiting For, the Turning Around EP is pure inventive temptation which makes The Drop’s impending album a must check out. Our impatience for it is already brewing agitation.

Get the Turning Around EP  as a name your own price release @ http://thedropmusic.bandcamp.com/album/turning-around-ep