James Stevenson – Everything’s Getting Closer To Being Over 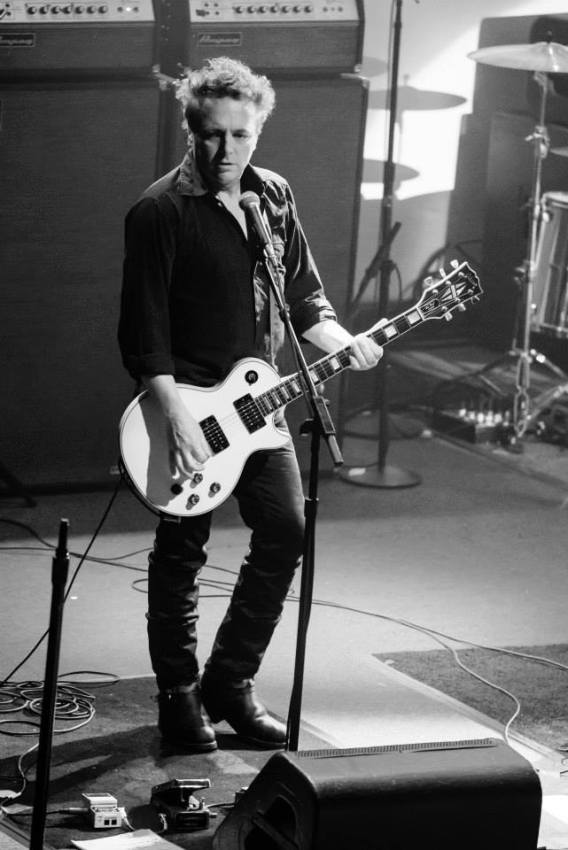 With a long list of notable and successful musical exploits on his CV, guitarist James Stevenson finally uncages his debut solo album, Everything’s Getting Closer To Being Over and a richly pleasing sultry slice of blues bred rock it proves to be. Hailing from London, the man has enhanced and fired up more bands, tours, and records than runs made by English batsmen this winter, but it is surprising in many ways that it is only now that his first full-length has emerged to make a persuasion, something it does with skilful ease.

Stevenson first made his mark when joining UK punks Chelsea in 1977, his addition to the band not the last time he would be called and thrust into the deep end when joining outfits over the years. Picking out some highlights on his long resume, Stevenson from playing on the band’s first two albums, numerous singles, and undertaking many tours around the UK and Europe, moved to featuring on Charlie Harper of the UK Subs first solo single Barmy London Army before joining Generation X. This was a short lived time as Idol a few months after quit the band to start his own solo career in the US. Stevenson then played in the emerging Kim Wilde’s backing band and formed Hot Club with ex-Pistol/Rich Kid Glen Matlock and ex Deaf School / Original Mirrors singer Steve Allen. Already we are missing out plenty of other projects and artists the guitarist was involved with to this point and will continue to as further choice moments in his career saw him after the band’s split joining Gene Loves Jezebel in 1985 to replace the band’s guitarist who had a nervous breakdown as their first US tour was underway. Filling in at the eleventh hour, Stevenson joined the band permanently at the end of the tour playing and helping write subsequent albums such as Discover, The House Of Dolls which contained The Motion Of Love, the band’s biggest UK hit, and Kiss Of Life which was released after the twins Jay and Michael Aston fell out and the latter departed the band. With the world of GLJ rumbling on with releases and messy disputes between the twins to simplify things, Stevenson also played with The Cult on their 1994 world tour, The Alarm on shows and recordings, on Gene October’s solo album which he also produced, and was part of the reforming of Chelsea.  This is just the surface of all the work Stevenson has been involved in over the years leading up to and around Everything’s Getting Closer To Being Over, shows and tours with The Cult, GLJ and The International Swingers which also features vocalist Gary Twinn (Supernaut), bassist Glen Matlock, and drummer Clem Burke (Blondie, Slinky Vagabond, Magic Christian), on-going adventures.

Stevenson’s album confirms and builds on the promise of the The Shape Of Things To Come EP which came out earlier this year, opening track Suzi’s Problem an immediate heat of tempting melodic flames and sizzling persuasion. The gentle blues rock swagger which drives its breath is a compelling enticement soon flourishing to greater effect with smouldering vocals and harmonies alongside shimmering expressive keys. The potent guitar style of Stevenson shines within the evocative textures woven to add to the impressive and riveting start, an introduction which is gently anthemic and magnetically absorbing.

The following Go Mister! takes things up another plateau, the initial guitar bred bait and coaxing vocals harmonies provided as across the whole album by The Sexpistilettos, a shadowy radiance. There is a definite gothic rock air to the song, a blend of Sisters Of Mercy/March Violets seduction with a punkier intent fused into a stirring melodic rock allurement. The song is a masterful and irresistible encounter which lingers and almost alone provides the album with a potential heady stature amongst the year’s wealth of rock albums.

Both the blues rich Twilight Riders with its great heavy nagging riffs and melodic passion, and the slowly burning Come On People stroke the imagination, the second finding a funk bred lilt to its tempting which is accentuated in Give It Up, a track which shuffles and dances with the emotions through agitated rhythms and exotic melodic enterprise from keys and guitar, not forgetting the ever mesmeric harmonies. Though the songs along with the emotive Why Am I Still Waiting For You and the equally evocative Been A Long Time Now, fail to find the heights of the opening few songs they leave a healthy appetite eager to feast on the album time and time again.

Another major highlight comes in the sinewed shape of Naturally Wired, a track sculpted with a deliciously growling bass and fiery sonic endeavour cast into a thrilling dark and absorbing stretch of intensive rock ‘n’ roll. There is also an air of hard and glam rock wrapping the grooves and glowing keys which only ignites the passions further as the heat of the track sizzles the air.

Completed by the gentle temptations of the title track and the acoustic led Been A Long Time Now, two songs which again give imagination and hunger enough to find strong satisfaction within, Everything’s Getting Closer To Being Over is a thoroughly enjoyable presence for ears and thoughts. To be fussy the vocals of Stevenson do not always manage to rival the sounds and there is a bigger leap between the pinnacles of the album and the other still magnetic tracks than one would wish, but the enjoyment it offers is full and long term. It may have taken time to get there but James Stevenson has made his debut album one to enthuse over and recommend wholeheartedly.