An insatiable turbine standing eye to eye with its victims whilst forcing them to undergo an intensive sonic examination, Sovereign the debut album from Australian metallers Chronolyth is a heavy duty adrenaline attack on the senses and passions. Unleashing a tsunami of violent riffery and equally destructive rhythmic antagonism, the eleven track goliath is a bestial storm of melodic death and groove metal which thrusts the passions into an intensive cacophony of skilled and predacious savagery but one brought with thoughtful craft and hungry imagination. Whether the album from the Brisbane quintet is offering anything new can be debated but certainly what they do reward the ears with is captivating and riotous anthemic temptation which is impossible to refuse or leave alone.

Formed in 2011 by guitarist Alex Nisiriou and vocalist Hamish McSorley as Stigmartyr, the band soon changed the name due to copyright issues, whilst its initial sound took on a heavier rapacious entity as the line-up went through major changes, arriving at that of bassist Jimmy Barrett, guitarist Ben Constable, and drummer Michael Gee alongside McSorley and Nisiriou. First single Bitter Reflection was uncaged in the November of 2012, drawing acclaim and strong attention from not only their homeland but within Europe too. An Australian tour earlier this year as well as a successful appearance at the Ye Gods of Metal ‘13 Festival has furthered their stature but the release of Sovereign is the key you suspect to an elevation of awareness  for the powerhouse of a band. Recorded with producer/engineer Nik Carpenter and mastered by the legendary Zeuss, it is dominate evidence of an emerging fury we will be hearing a lot more of and placing greedy attention upon.

The album opens with a smouldering orchestral bred charm as The Heresy (Crucify Your God) drifts into view, its body calm 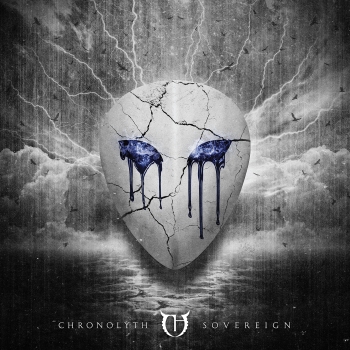 and elegant until ready. Once settled it explodes through a gateway of punching rhythms and sonic stroking from the guitars into a furious rampage of serpentine grooves and annihilistic riffery matched by the voracious drumming of Gee.  It is an uncompromising fury but one sculpted with a weave of irresistible sonic hooks and intensive enterprise which instantly ignites a raging hunger for its sound. As is proven across the album there is no breaking into brand new fields going on but simply a virulently contagious tearing up of existing fields and invention into something primal and all Chronolyth.

From the first track alone thoughts of the likes of In Flames, Lamb Of God, and Devildriver flirt with thoughts which remain across the album, only flavouring but a strong spice which does  Sovereign no harm but does add that essence of familiarity which challenges originality. Nevertheless as the next up I Am Wrath and Condemned In The Throes Of Remorse shows it cannot prevent Chronolyth igniting the ears and emotions with its destructive invention. The first of the two grips from its first breath, chewing the senses into submission with a blaze of intensive rabidity from sound and vocals raging over a crippling network of rhythmic venom. Its air is muggy; the squalling delivery of McSorley matched by the viscous energy of the guitars and their caustic sonic wash but with a twisted appetite guiding grooves and melodic fire, the track is an irresistible and riveting spite. Its successor is also fuelled with a voracity which leaves the listener breathless even if certainly on the surface it is a little too close in sound to its predecessor to stand out clearly, and a couple of times listening to the album the pair has merged without notice until the later part of the second. That is a small niggle about the album, a similarity between some tracks without a certain concentration but again nothing to diminish the pleasure of the confrontation.

The first of the major peaks comes next with Whips And The Scorns, the instant the rabid throaty tones of the bass courted by the rampaging drums hit the ears it triggers a surge in the passions, one which is rewarded as the track finds the darkest devilry and addiction forging invention to oppress the eager senses within. Grooves and melodic sculpting are the purest primal seduction as is the barbarous rhythmic exploit which veins it, the song a prize in rancorous metal alchemy.

Bitter Reflection follows to keep the album at its new plateau, a melodic invitation erupting into another merciless acrimonious foraging of its recipients but one unafraid to let the guitars cast a sonic fire of skill and imagination from Nisiriou and Constable, a heavy metal inspiration colouring their resourceful tempting. Its heights are not quite found with the likes of Age Of Fear and Defiling The Soul though both continue to increase the powerful persuasion of the album as does latest single Behold The Tyrant’s Fall, it an absorbing meeting of aggression and beauty where the band almost reins in their hostility, well in certain moments anyway.

Sovereign’s finest moments bring up the rear to stand toe to toe with Whips And The Scorns for top honours, Fallen Saviour eventually stealing the award with its scintillating ferociousness and inventive hunger. From the shadows it launches an epidemic of exhausting energy and rhythmic pugnaciousness woven together by a delicious pestilence of grooves and sonic seducing. Vocals as always stand astride the diverse causticity, spewing out the narrative with passion and eagerly devoured inhospitable truculence. The song is a brutal incitement which takes the album that extra small step into being one of the year’s best, the icing on the mountainous cake assisted right after by Silent Eyes, the track a relentless provocateur which burns slower than most in the passions but evolves into another of the release’s biggest triumphs.

Completed by the title track, one final bait of perfectly designed irresistible violent frenzy, Sovereign is an outstanding debut from a band we are destined to hear and feel much more from. Chronolyth has yet to find that unique sound and design but when they do it is hard to see what will stop their rise to the frontline of metal dominance.