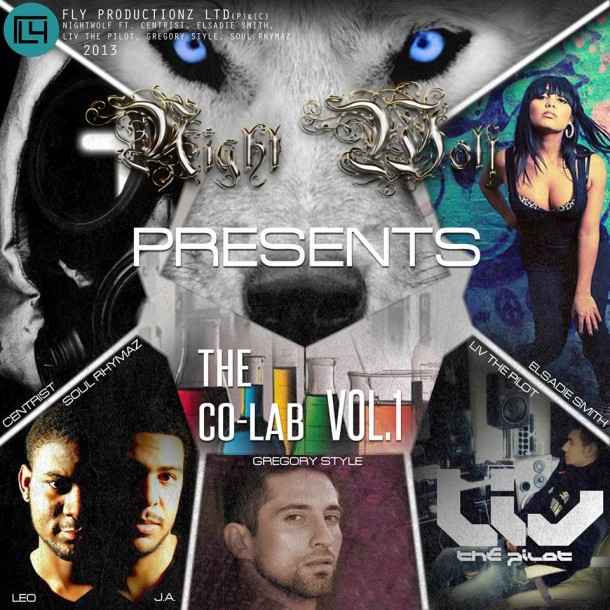 The first in a proposed series of collaborations, Night Wolf Presents: The Co Lab Vol.1 is a magnetic and eclectic adventure for thoughts and imagination provided by a vibrant journey through electronic climes bred with potent essences of hip hop, dubstep, R&B, classical elegance and more.

The project and release is the brainchild of composer/producer/musician Ryan Wilcox aka Night Wolf with the intent of collaborating with a wealth of emerging producers/composers and artists. Hailing from Milton Keynes and Luton based since a child, Wilcox started out drumming in rock bands before concentrating on his own music. Alongside his solo work Wilcox formed Harmony’s Descent with Mike Ziegler aka Centrist from Dekalb Il, the pair’s songwriting and music themed by all aspects of life, from anguish and loss through to happiness and love. Earlier this year saw the release of the Watts The Time and Moonlight EPs, both featuring Centrist, and now the again Fly Productionz Ltd along with Cygnus Music released The Co Lab Vol.1,  brings another varied and captivating encounter from Night Wolf.

The release opens with Move It On featuring German singer songwriter Elsadie Smith and J.A. from Luton trio Soul Rhymaz. Pulsating beats and equally full electronic caresses make the first embrace guided by the dark tones of J.A.; it is a mere moment though as the seductive tones of Smith wash over the ears, her graceful delivery gaining greater potency as the r&b narrative weaves around the senses. It is an elegant and mesmeric temptation with the merging of vocal differences as accomplished and bewitching as the sounds around them. It is a very decent start to the EP if one which pales against some of the following triumphs.

The first of which comes through Work Rate which finds both J.A. and Leo Soul from Soul Rhymaz as well as Liv The Pilot joining the haunting yet tantalising emotive croon. Crystalline melodies dance over the ear from start to finish, a celestial ambience adding to their sparkle but equally there is a sinister breath to the lure, one not far removed from the threatening tempting provided by the soundtrack to Halloween. Plainer vocals make a great compliment whilst the mellower delivery only adds extra warmth to the scenic musical canvas. It is an excellent trigger for the imagination and passions with only one moment where it felt like the cycle of music had come to an end midway and stutters as it returns to the start to roll again to query.

Sucker Free is the pinnacle of the release, its tribal stomping over an energetic hip hop vocal devilry irresistible. Again it is J.A. providing the vocal incentive as the song flexes its electronic muscles and rhythmic tantalising whilst sexy funk naughtiness sways and dances within the hypnotic romp. It is a masterful slice of imaginative bait to catch and spark the passions into a lively and eager hunger.

The following Enemy List is a simmering slow burning success, the smouldering heat and melodic allure of the song taking time to convince but with numerous excursions of its gentle and emotive expanse covered in the impressive tones of Greek singer Gregory Style, emerges as another strong encounter, if still one failing to find the same rich appeal of its predecessor. The guitar strokes provide the biggest highlight of the appealing song but sandwiched between what came before and the following Downgraded it had a tall order to fill, though its attempt is admirable and an easy to return to presence. The closing song which sees Centrsit with Night Wolf is another peak on the EP, a delicious melancholic instrumental lighting the emotions and thoughts, its emotively incendiary washes of strings and classical depths finding a sirenesque enticement.

The song completes a thoroughly enjoyable and emotionally inciting release. It is an unexpected treat to be honest as its style and predominate flavourings are not the usual spices for this musical palate, but one with which you can only see Night Wolf recruiting a wealth of new followers whilst inspiring existing fans to drool greedily.

Like Loading...
‹ Challenges and instinct: an interview with Dave Curran of Pigs
Hysterix And His T-Rex – Changes – or, when love becomes misery EP ›