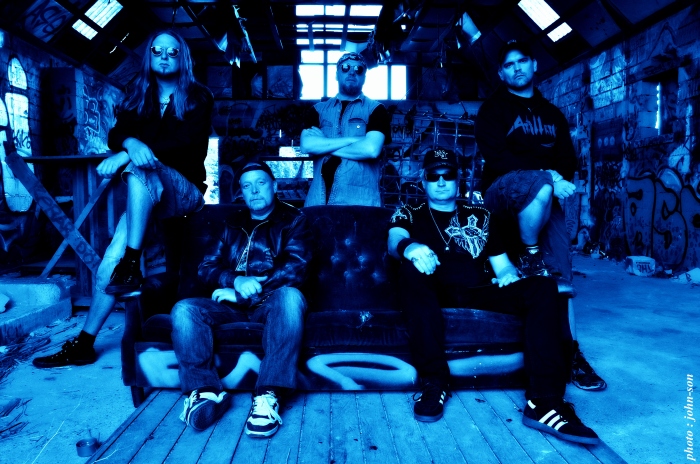 With more charge to it than the national grid and stronger adrenaline fuelled rapaciousness than a swarm of ladies on day one of the sales, Legions the new album from Danish metallers Artillery unleashes a horde of riotous and rampant melodically sculpted furies. The album is a magnetic beast of enterprise and passion and one which takes the accomplished and acclaimed presence of the band to new heights.

To be honest the evolution from earlier releases from the Copenhagen hailing quintet is not as dramatic as you might anticipate but something has clicked within the band, whether it is the addition of new members or the finding of a certain element in their intent and songwriting, but where personal tastes could previously take or leave Artillery, Legions has sparked a definite hunger and compulsion for its exhaustive adventure. Formed in 1982 the band released four enthusiastically received and acclaimed albums before disbanding in 2000, for the second time. 2007 saw Artillery reform and release two years later When Death Comes, to be followed two years later by My Blood, both again earning success and acclaim. With a few changes across the years the current line-up  emerged last year with vocalist Michael Bastholm Dahl and drummer Josua Madsen joining founding members and guitarists Michael and Morten Stützer, and bassist Peter Thorslund who joined in 1989. Following a triumphant European tour this past May, the band entered the studio with producer Søren Andersen and what has emerged is a thrilling unrestrained ride of thrash soaked speed metal within an album which simply ignites the imagination.

The Metal Blade Records unleashed record opens with the intriguing entrance of Chill My Bones (Burn My Flesh). A tribal

rhythmic coaxing is soon joined by a folkish dance, both aspects reserved yet wrapped in an eagerness which is hard to resist. It is not long before the song erupts into a blaze of sinew powered riffs and thumping rhythmic provocation whilst still leaving room for the initial beckoning to continue its call. Mere moments later and the band is rampaging through the ear with bass and drums adding a fiery predation aligned to the scorching of guitars whilst the immediately impressive vocals of Bastholm Dahl add their particular melodic flame to the proceedings. It is a magnetic onslaught which drips craft and imagination whilst chewing the senses like a rampant wolf.

The immense start is instantly continued through the following God Feather, the track taking over where its predecessor left off, riffs and rhythms a torrential provocation and contagious persuasion ridden by the outstanding clean and fluid vocals. Imagine Testament meets Flotsam and Jetsam with a healthy dose of John Bush led Anthrax and the track and album comes into view whilst offering plenty more for the appetite to breed a real hunger for. The song is a virulent anthemic lure matched by the exceptional title track. As with most the song gnaws on the senses from the start, riffs a corrosively seductive temptation punctured by the potent rhythmic antagonism of Madsen. With an almost waspish irritancy to its grooves and a swagger to its breath the track is a breath-taking blitz on ears and thoughts.

Both Wardrum Heartbeat with its stalking rabidity and Global Flatline through its inventively shifting and evolving raid of diverse metallic flavours reinforce the towering start; the second of the pair simultaneously unpredictable, enthralling, and expectations satisfying, a pinnacle to match the opening two songs whilst next up Dies Irae provides an unsurprising and safe but still riveting anthem all great speed metal conjuring requires. The guitar play of both Stützers is stunning across the album with this track and the following Anno Requiem open showcases, the pair’s ability to savage and seduce within a blaze of time irresistible.

It is fair to say that the album is not smashing down metal walls but as shown by the individual majesties of the epically sculpted melodically drenched Enslaved to the Nether and the sinister Doctor Evil, where menacing predacious riffs and enchanting sonic ingenuity hold hands as they rush the senses, Artillery rigorously embrace thoughts and emotions in a storm of adventure which stands side by side with some of the very best this year.

Closing with the Middle Eastern seeded insatiability of Ethos of Wrath, the song a sultry muscular temptress which excites in every aspect, Legions is a scintillating and arguably unexpected treat for ears and passions to indulge greedily in. It is also a release which just gets stronger with greater captivation the more sorties you take within its exceptional siege, right now Artillery is at the top of its explosive game.

Like Loading...
‹ Exploring the emotional hues: an interview with Sad Sir of End Of Green
Code – Augur Nox ›