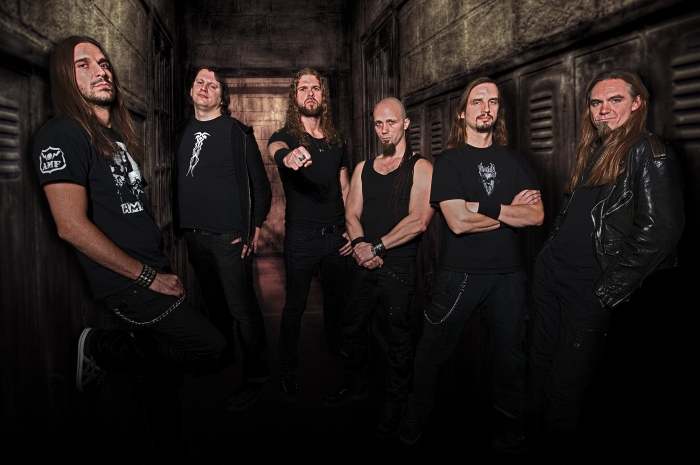 Having already been released on CD this past march, Tomorrow the latest album from German metallers Sapiency gets a deserved digital release and distribution through Eclipse Records this month, and thankful we should all be as it is a rather flavoursome and contagious little gem which may have escaped attention otherwise. Not exactly stretching boundaries but having that little indefinable something which sets it apart from the crowd, the eleven track storm of accomplished and passion soaked invention leaves hunger for more and fat satisfaction mutually potent responses to its voracious enterprise and energy.

Hailing from Frankfurt and formed in 2008, Sapiency was soon drawing attention locally and further afield. Their acclaimed debut album Fate’s End in 2010 was just the start of a growing stature and reputation, their own tours as well as support slots to the likes of Sonic Syndicate, W.A.S.P., Dead By April, Tito & Tarantula, Deathstars, Vader, Engel, Onkel Tom (Angelripper), Power Quest, Pathfinder, and many more earning the band greater recognition as has successful performances at festivals such as 70.000 Tons Of Metal 2012 and Metalfest Open Air 2012. It is hard not to develop an eager appetite for the sextet’s sound as shown by second album Tomorrow, and with a wider network for it to spring from you suspect that Sapiency is on a rapid ascendency.

The band is tagged as melodic death metal yet that is only a fraction of the picture, or sound with the band employing a wealth of

inspirations across the metal spectrum so that within the new album they can bring essences of In Flames or Lamb Of God to bear and at other times Bloodsimple or Livarkahil. It makes for a strikingly resourceful and thrilling encounter which from the opener Prayer For The Pain captures the imagination. From its first breath the track careers through the ear with riffs and grooves carving out their insistent presence whilst the bone splintering rhythms of drummer Kai Voss-Fels cage the tempest raging within their framework. It is a mouth-watering confrontation which never relinquishes its grip on the awoken passions right through to its final strike. The outstanding dual vocal attack of the cleaner grouchy delivery of Lars Bittner and the bestial scowls of Krsto Balic is a forceful magnetism across the whole album and strapped to the carnivorous craft of guitarists René Ritzmann and Holger Wenck, as well as the predacious bass prowl of Sebastian Fix, makes for an exhausting, riveting introduction.

Hungry Again keeps the rapacious intent and rabidity at full throttle whilst interspersing it with a seductive coaxing from the keys and a classic metal orientated temptation from the melodic casting of the guitars. The merger of bordering vindictive riffs and virulent groove metal lures to the expansive melodic adventure is impressively crafted and wholly infectious, leaving ears and emotions basking in demanding and rewarding metal at its best. Arguably there is little strikingly new on show but equally Sapiency present it in a unique and compelling way that it is as fresh and invigorating as you could wish and sets the band apart from most.

Through the likes of Free Within with its electronic tantalising seemingly fuelling an even greater aggressive fervour from band and sound as Avenged Sevenfold like sonic sculpting spears the air, and the enslaving mix of melodic enticing and strenuously robust intensity of the title track, Tomorrow continues to seize the imagination and feisty passions whilst tracks such as the crushing Weight Of The World and the slower smouldering Fight On explore deeper appealing avenues and creative corners within the songwriting and its invention.

To be honest there is not a weak moment upon the album, each track a formidable and impacting persuasion and though occasionally a surface similarity rears its attractive head it is a fleeting wrap soon punctuated and lost with keener focus. Further peaks on Tomorrow are provided by firstly the industrialised irresistible might of Turn The Tide, guitars and vocals once again weaving a rapaciously stalking narrative which is pure addiction, and by the towering presence of Torn Apart. The track is another ferocious antagonist but one just as content to let a melodic acidity and harmonic temper vein its furore.

Completed by the absorbing Dying Illusions, a final raging skilled and esurient assault, Tomorrow is a richly satisfying and exciting confrontation which does not carve out new ventures to contemplate but employs existing invention in its own unique and wholly exhilarating way. Sapiency is a band we are destined to hear much more of ahead and undoubtedly enjoy at even greater heights as the promise also burning brightly across the album suggests.

Like Loading...
‹ Eye Of Solitude – Canto III
Exploring the emotional hues: an interview with Sad Sir of End Of Green ›