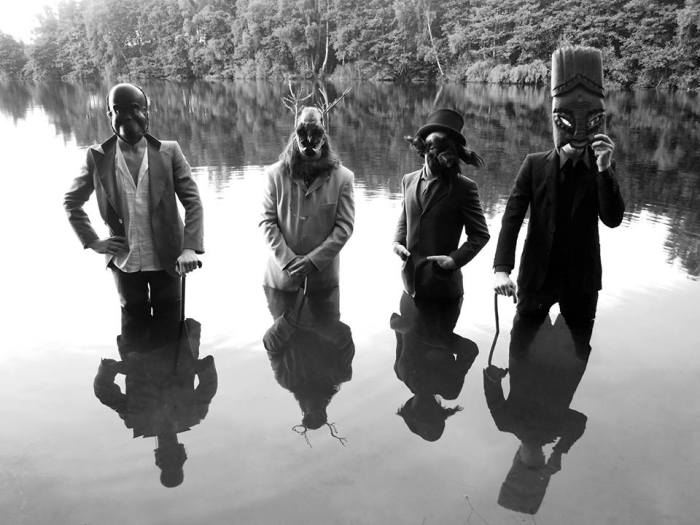 Undoubtedly a musical union from the loins of the Devil, Belgian noise manipulators The Rott Childs are poised to take over the world’s psyche with the unleashing of their second album Alleluia: A Brit Milah In G Melodic Minor. Consisting of ten tracks sculpted with schizophrenic invention and bedlamic imagination, the sonic alchemy uncaged is a breath-taking, fertile tempest of post hardcore and mathcore ingenuity aligned to an aggressive progressive intent which warns not to confirm those best of year album choices just yet.

The Rott Childs made their entrance with the well-received debut album Riches Will Come Thy Way, A Musical in 2009. It was a release which like for a great many outside of their homeland we suspect, evaded our attention but soon received a retrospective investigation once its successor had dug in its staggering sonic claws. Alleluia: A Brit Milah In G Melodic Minor follows on from the endeavour forged on the band’s first release taking it to a maturer and greater incendiary plateau of inspiring confrontation. The quartet of guitarists Christophe Dexters and Jethro Volders, drummer Wim Coppers, and bassist Florent Peevee who also fronts the brilliant Kabul Golf Club, are not content in just engaging the senses and imagination, they want and do take them on a journey through ravenous creative ‘mayhem’ which just enflames the passions.

The opening Prelude offers an intrigue but no real hint of what is to come, its melodic caress and rhythmic shuffling a lure soon

left behind by the intensive fire of Caloric. Guitars are soon searing the air and teasing the ears whilst the excellent vocals offer a distinct acidic inventiveness too. A scorching sonic bedlam sounding like the deviant cousin to a merger between Blood Brothers and At The Drive In, the track whips up a frenzy of exhausting beauty and predacious energy courted by a crazed craft and mouth-watering invention. Bass and drums sculpt a web upon it which just seduces the passions whilst the guitars weave a ridiculously easy to be addicted to expanse of aural narrative which the excellent vocals and harmonies dance impressively along.

The following Pass Out the Charm parades an even darker psychotic swagger to its adventure, bass lures and sonically hued hooks as with its predecessor virulent tempters spearing the acidically spiced melodic net which just twists and evolves with every passing second. It is a riveting explosion of genius, a feisty torrent of inventiveness which moves its boundaries as it seamlessly flows into a noir clad shadow soaked finale. The song is another masterful pinnacle on an album which gets better song by song, as proven by the fire bred Pretty Diamond. Noise and radiance are easy bedfellows within the rhythmically challenging snarl of a track, a caustic essence of The Fall Of Troy and maniacal breath of The Mae Shi offering their references to the wonderful turmoil being played out.

The next up sinew veined Suitcase Full of Stupid has a Kabul Golf Club toxicity and antagonism to it but within another transfixing melodic meshugah which persists and niggles thoughts and emotions into submission whilst Stumble bursts in straight after with a certifiable rhythmic stomp and sonic rapaciousness, the track virtually stalking and teasing the synapses and emotions into lustful engagement. It is startling and incredibly impressive stuff from song and album, The Rott Childs bringing provocations and spices from all those bands mentioned, to which you have to add Mars Volta at times too, into something loudly distinct and dramatically innovative.

The triumph does not slow down or stop there though as the exceptional sonic storm that is Stutter, the track finding a carnivorous depth which the bass especially feeds off of, and the dark haunting Children’s Life Size Gorgeous Luxury Play House shows. The second of the two is haunting as in an Insidious way, sounds and emotively drenched sonic incitements leaping from the walls and heart of the song to seduce and disturb before ending on a sonic lancing of the ear which leads into another glorious mind challenging provocation. Marching Band is a warped festival of imagination and ingenuity, a technically exceptional, as the album, riot of loose limbed rhythms which simply leave the senses punch drunk and a sonic flaming that corrodes and ignites thoughts.

The closing Gold Crumbs leaves the release on the same persistently consistent high it started upon and maintained. A bewitching and disorientating brawl of never able to settle sound and creativity, the track is a romping puppeteer for lustful passions, a violent and merciless one but one with a wanton seduction it has to share. Not for the first time on the album the bass has a Gang Of Four growl to it presence as the guitars flay ears and air like sonic dervishes, It is a presence which is sheer contagious devilry proving again that quite simply Alleluia: A Brit Milah In G Melodic Minor is unhinged sonic poetry and The Rott Childs the authors of one of the very best albums this year.