Home › Music › Album › We Are Fiction – One For Sorrow

We Are Fiction – One For Sorrow 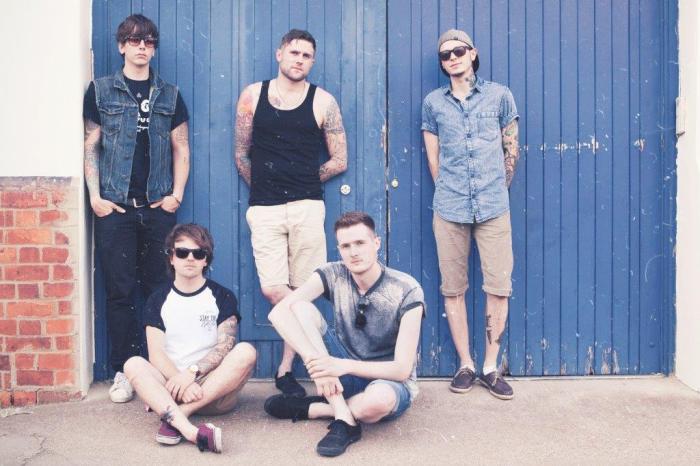 It is not stretching things to say there has been a fair amount of anticipation for the debut album from UK melodic hardcore band We Are Fiction, an eager appetite spawned by the band’s singles and impressive live performances.  Consisting of eleven vibrant and skilfully crafted confrontations, One For Sorrow does not let hopes down even if maybe it does not ignite as many fires in the passions as expected. It certainly expands on all the promise laid down before, spawning even greater potency for future horizons whilst unleashing a few special moments for the now.

Since forming in 2007, the Peterborough quintet has undoubtedly earned that reputation as one of the most energetic and passionate live bands to emerge over recent years, their honest and impacting mix of post and melodic hardcore raging like a new yet familiar provocateur, something which also easily applies to their album. The Destroy Everything Records released riot has a presence and intent which does not exactly surprise, especially if aware of earlier releases, but comes with a fresh and compelling intent which never relinquishes its lure on the imagination and emotions. Some songs raise a greater reaction that others but all leave a satisfaction and enjoyment which makes the album a release well worth exploring.

The album simply explodes into action with opener Mansion House, guitars and drums filling the ears with vibrant and eager

riffs and rhythms. With inviting flames of melodic invention offering their persuasion the song has the listener immediately engaged and ready for the fine vocals of Phil Barker backed by the harsher tones of guitarist Marc Kucharski  who bring further passion and enterprise to proceedings. There is nothing openly ground-breaking about the song but with a great blend of raw and seductive elements uniting for an energetic expressive storm the track is an imagination stroking entrance.

The following Bright Lights provides a mellower yet still feisty encounter which is infused by infectious anthemic qualities via riffs and vocals. Once again the guitars of Kucharski and Andi Scott Shaw create a weave of skilled and inventive temptation which veins the firm if restrained attack from drummer Tom Calton and bassist Ryan Chambers. The song keeps attention tightly in the band’s hands as does next up My Dreams Are Haunted, a melodically enchanting and evocative embrace. With all of its rawer and angry essences coming within the varied vocal attack the track is an intriguing venture which is unafraid to wear its heart on its sleeve and shuffle its gait up to keep things unpredictable. Like its predecessor the song fails to maintain the high level of the starting track but still strongly persuades with an intelligent and inventive sculpting to its body.

Both Old Wounds and Sail On make a potent persuasion without igniting fires, the first a blaze of generous melodies and sonic endeavour wrapped around a sinewy core; the rich songwriting of We Are Fiction again proven to be hard to fault at any point across One For Sorrow. Its successor brings a harsher angst fuelled essence into the melodic arms of the song for another inventive and attractive confrontation which is as passionate as it is impressively crafted. Neither track, like quite a few upon the album, linger in the memory or spark off a real fire inside and that is the main or only issue with the album. In its presence it impresses and does get stronger with each encounter, but away from its touch thoughts and emotions struggle to recall what was on offer more often than not. There are exceptions though as with the next up A Thousand Places to Sleep, the opening rhythmic contagion carved by Calton and Chambers simply irresistible and easily matched by the sonic tempting conjured by the guitars. A punk fury fuels the vocals and riffs whilst the drums are a persistent and inciting provocateur. Its virulent lure lessens a little with the cleaner vocals though, as if the aggression is making space though it soon returns to prowl and snarl impressively through the outstanding track. It is one of the major highlights of the release and one which does remain in the memory past its departure.

Building on this high Tilt finds a caustic and rapacious edge to sound and presence which takes top honours on the release. There is a delicious heavy rock weight to the song which merges perfectly with the hardcore thrust of the narrative and intensity, and with a scintillating adventure to the vocals employing rap and noise rock magnetism, the track easily stands above the rest, the unexpected and startling elements a seamless and inventively convincing triumph.

The Worst Of It, the latest single from the album is another exciting incitement, its pop punk/melodic hardcore blend contagious anthemic bait mixing a kind of Blink 182, Hundred Reasons, and Mallory Knox brew which makes a very efficient invitation for band and release.

The final trio of songs starting with the highly emotive Wladyslaw continue to please ears and imagination if paling against what just came before. A drama lit melodic and sonic craft scorches the air within the blues kissed song before the stocky charm and intensity of Earth Machine and the emotionally anthemic Forget About Me take over to conclude the album. Both tracks are impressively built and textured and it is hard to lay any faults before their offerings, except that again not a great deal hooks in the memory once they take their leave. Whether that is actually a major fault is debatable as listening to One For Sorrow only makes for one richly fulfilling hour or so.