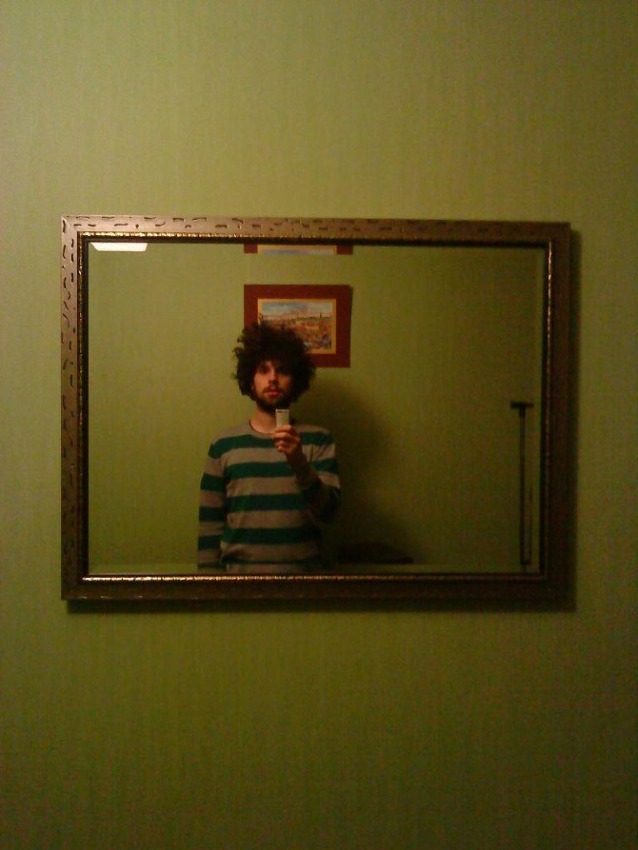 It is hard to define exactly what it is that Louis Jucker conjures on his new EP Eight Orphan Songs which creates such an emotional impact and connection but the eight raw lo-fi temptations which make up the release manage to seduce and ignite the imagination with ease through its almost primal craft and persuasion. Certainly the strength and creative ingenuity of the intimate reflections and incitements does not surprise coming from a member of The Ocean, Coilguns, Kunz, and The Fawn but the DIY sound he sculpts on the EP might you suspect unless previously aware of earlier solo efforts. It has an abrasive experimental intent which can be aligned to that of Coilguns but other than that the anti-folk seeded musical endeavour is a unique and haunting examination of thoughts and feelings.

Eight Orphan Songs is the first actual official solo release from Jucker via Hummus Records but follows previous releases including the EPs Spring! Spring! Spring! and Chinese Sketches, all of which are available as free downloads via the label’s Bandcamp profile. The new release continues the exploration started on earlier experimentations, a fusing of bontempi beats, raw almost caustic acoustic guitar, and haunted leaning on traumatised vocals which simply wrap the lyrical narratives in a potent lingering evocation. Written whilst Jucker lived in an old flat in Switzerland in 2012 and inspired by the experience and feelings of that time the EP is an extraordinary aural journal; in the words of Jucker “The odd beauty of the words and melodies of the record is an echo of the days I had there.”

The release opens with Feathers, its rhythmic enticement a perpetual hook into the heart of the moment represented. A strong

scuzz kissed guitar provides the landscape which Jucker with his distinctive and startling vocals colours with magnetic intrigue and emotive hues. His delivery with the track, and the release to be honest, has not exactly a schizophrenic feel but definitely an emotional and visual discord bordering disturbed breath which makes it scream in invention and uniqueness whilst immersing the listener into a striking new world and innovative passion.

People Are Noises is the next to transport the senses to a passage of time it sparking the imagination to visualise a speeded up stroll through crowds of rapidly passing emotion clad lives. It is a musically poetic and lyrically inciting venture, one deceptively simply but made of rich textures sonically and emotionally which just captivates as does its successor We Lived A Mountain. The song has a deeper throat to its sound and presence, a darker temptation with an unfussy but effective hook which carries a punkish lilt, especially within the infectious fiery moments. It is a glorious psych rock bred incantation for the passions and the best track amongst an octet of impressive and riveting suasions.

Sleepwalkers continues with the intensive atmosphere, the heavier sonic blaze of the guitar a stirring and burning melodic flame over the simplistic rhythmic frame. The track has a touch of garage rock to its lilt, a rougher predation though one only spicing the enthralling unrefined sirenesque call of the song and the ever provocative vocals. It is another pinnacle in a row of peaks which is emulated in quality and endeavour by The Girl That Left You At The Bus Stop. The track tantalises and stirs thoughts, the acidic guitar and vocal harmonics a sultry caress within a raw production which tempers but equally accentuates their beauty and elegance. There is drama in all songs upon Eight Orphan Songs but this song has the strongest descriptive narrative of all in many ways, it casting a scene in the imagination all can find a reflection within.

Both I Curse You and You Are My Glasses coax the passions further, the first of the two having a seemingly familiar melody which persuades like an existing friend whilst inciting the sense of an emotional unknown Its successor is an evocative electrified consumption which seduces and riles the senses beautifully, the song another riveting example of the rich songwriting and its under-baked yet incredibly informative and adventurous realisation.

Completed by the excellent acoustic and thoroughly stimulating Major Chords Solve Minor Problems, Louis Jucker’s EP is a deliciously honest and expressive slice of invention. Eight Orphan Songs is ingenious lo-fi alchemy and something fans of his other bands and projects should want to explore; they will not be disappointed.

Like Loading...
‹ The Creeping Ivies – What Would Joey Ramone Do? /Ramona Wolf
Bleak Falls – The Grass Gets No Greener EP ›