The return of King Prawn for us, like for so many, was an over excited thrill matched by lustful anticipation of new sounds from the UK punks. The band has forged themselves as one of the influential greats with their anthemic ska/punk fusions and authority antagonising lyrical confrontations, so much so that their split in 2003 left a big hole in hearts and punk itself as fans mourned with the band’s classic albums and songs as company. The announcement of their return earlier this year set passions aflame once again, live performances equally so, but new recorded material could only confirm it was not just wishful dreaming that King Prawn was back to challenge and ignite the country . The two track single is that confirmation, Done Days/A Solemn Man a thoroughly pleasing encounter and an extremely promising hint of the band’s next album, due spring 2014.

Reuniting 4/5 of the original line-up, vocalist Al Rumjen who recently had a successful stint with Asian Dub Foundation, guitarist Devil Hands, drummer Nikoli, and trumpeter Dr Nelly coming together once again, the band is further joined by new bassist Zac Chang (taking the place of the non-returning Babar Luck) and an expanded live horn section. The single combines two songs which have little difficulty in igniting the emotions, one an intriguing suggestion of things to come and one prime King Prawn, its company sparking the passions as if the band had never been away. 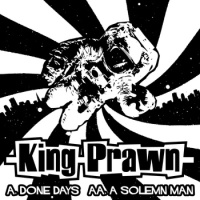 Al Rumjen. It is an enthusiastic and vibrant introduction which captures the imagination and sparks thoughts of last album Got The Thirst whilst having an undefined element which points at an even greater wealth of inspirations in the songwriting and experience in its realisation. The bass of Chang has a prowl and throaty resonance which adds depth to the song whilst the brass and keys create a wash of warmth and enterprise which excites with a fresh suggestiveness from the band. It is fair to say that the track never explodes into the hinted eruption, especially the chorus which does not quite catch fire, but with feet stomping in unison to its beats and emotions lit from its adventure, the song is an undeniable satisfying and potent return.

The AA track of the release is a simply glorious slice of King Prawn invention. A sultry guitar enticement stands side by side with a brass flame of evocative heat to open up A Solemn Man, their beckoning soaked in Latin seduction and sweltering persuasion. There is a sense of a call to arms to the entrance of the song; it offering anthemic bait which settles into a transfixing ska saunter which itself evolves into a rock powered chorus.  With added gypsy punk spice and those ever spellbinding fiery brass temptations a persistently contagious and inventive persuasion, the track is King Prawn at its irresistible best creating a sound and encounter which is unafraid to attack and seduce whilst providing the most addictive groove bred punk. Not much left to say, King Prawn is back!!