Nestling potently and comfortably amongst the likes of Three Days Grace, Alterbridge, Chevelle, and Creed, US rock band Emphatic step forward once again to light up ears and thoughts with their new album Another Life. It is not a release which exactly sets down new markers or offers dramatically unique ventures within its eleven emotively powerful offerings but certainly it is one which leaves a strong canvas of infectious and richly rewarding musical narratives for senses and imagination to eagerly indulge in. The successor to the acclaimed Damage of 2011, the new album provides an appealing dose of heart sculpted highly accomplished rock intensity and passion.

Formed in 2004 by guitarist Justin McCain, Emphatic has had a steady and constantly ascending emergence, first leaving strong marks through their self-titled debut album of 2005 and three years later the Goodbye Girl EP. It was the release of Damage though which triggered a new depth of attention and awareness, not forgetting acclaim around the band. Live too with the sharing of stages with the likes of Stone Temple Pilots, Buckcherry, Avenged Sevenfold, Papa Roach, Breaking Benjamin, Flyleaf, Five Finger Death Punch, Theory of a Deadman, Alter Bridge, Black Stone Cherry, and Adelitas Way, the band’s reputation has grown and brought an enthused audience to their excellently crafted and energetically honed sounds.

The release of the last album was followed by the departure of vocalist Patrick Wilson who suffered a career halting injury when he fractured his larynx, and with also rhythm guitarist Lance Dowdle and bassist Alan Larson leaving, Emphatic was facing uncertain times. Eventually though McCain and drummer Patrick Mussack enlisted Jesse Saint (Scum of the Earth/The Autumn Offering) on bass and Bill Hudson (Cellador) on guitar whilst the frontman spot was taken by Toryn Green, the former vocalist of Fuel and touring lead vocalist for Apocalyptica. The new blood and energy gave a new lease of life to the band it is fair to say and certainly has combined to create in Another Life, their finest moment yet and a thoroughly enjoyable and persistently satisfying encounter.

The Omaha, Nebraska based band immediately works on the senses with the opening persuasion of Life After Anger. The song is a keen 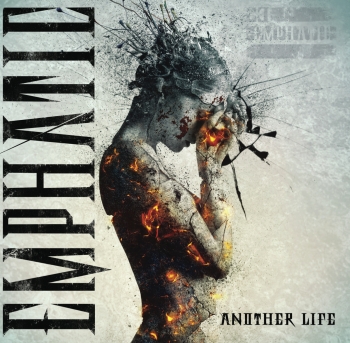 and emotional caress with the vocals of Green taking little time to impress amongst sturdy beats and sinew driven riffs. The melodic heat and expressive voice of the track equally lays a reflective enticing lure and with an element of Seether to it, the song makes an excellent lead into the heart of the release which is straight away backed up by Time is Running Out. Again there is a familiarity to the track, something which applies to the album as a whole, but equally there is a flourish and intensity which marks it as Emphatic bred. The addictive sonic groove and continuing to impress vocals and supportive harmonies capture the imagination alongside a solid resource of invention and enterprise which parades across the song to bring forth a strong appetite for album and band.

The following Lights makes a gentle coaxing with its first breath before adding a little more urgency to its still restrained and emotional beckoning. The song than settles into a provocative and intensive narrative which without matching the heights just set still draws thoughts and emotions into its embrace whilst stretching the variety within the album, a melodic diversity given another flame by next up Some Things Never Die. The song similarly misses previous plateaus set but with a melodramatic touch of keys and tenderly preying call of riffs and bass, emerges to give its share of strong satisfaction and another string to the album’s aural bow.

Both The Choice and the title track bring the album up to its earlier heights, the first with an expectation feeding slice of rock but one which ensures they have a skilled and potent meal whilst the second entwines a delicious groove around an imaginative and fiery melodic painting of contagious adventure and evocative craft. The best song on Another Life, it leads passions by the hand into a sweltering dance of reflection bred, melody soaked colour within captivating passionate scenery.

As tracks like the stylish I Don’t Need You and the ballad Louder Than Love unveil their varying temptations and the fevered Forbidden You provokes the imagination, Emphatic continue to provide a thoroughly engaging presence. The three songs again are slightly adrift of the biggest highlights of the release whilst being soaked in a sound which arguably many bands have explored previously, but each nevertheless creates a persuasion and invitation that is hard to refuse or not want to accompany again.

Closing with the greatly pleasing Take Your Place, a track like many with an anthemic lure to its chorus and skilled bait to its melodic craft, and the lead single from Another Life in the shape of the adrenaline fuelled Remember Me, the album at the end of the day is an absorbing and openly enjoyable encounter. Superbly crafted and impressively delivered, Emphatic has brought a proposition which leaves you fully satisfied and with an increased appetite for their offering, a meal you know and feel safe with but also one filled with little spices of invention that keeps it fresh and daring.