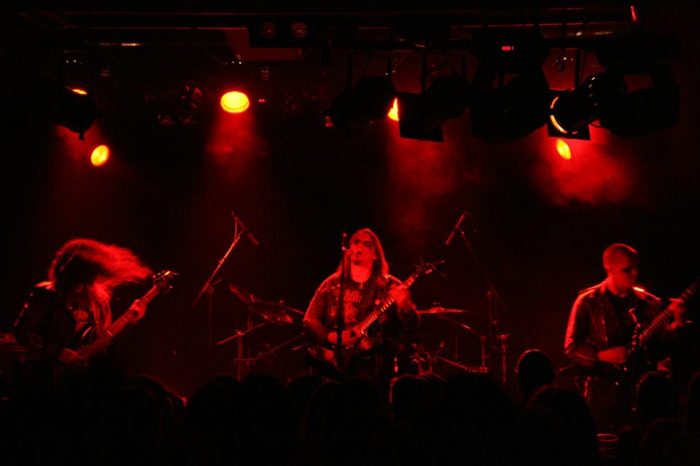 From the outstanding cover art to its last ravaging note, Towards Eschaton the debut album from UK metallers Craven Idol is quite simply impressive, a full explosive introduction to a band which has already been grabbing good acclaim and attention. Unleashing a sound which sits somewhere between thrash driven black metal and black soaked death, the London based quartet creates an exhausting tempest of invention and enterprise upon their album, it a thrilling scourge which cleverly employs existing genre weaponry in an equally rich blaze of originality. The result is a torturous triumph which threatens and excites whilst parading a presence which suggests Craven Idol is a band with a rather potent future.

Making their first ‘appearance’ with a self-released demo tape in 2006, a limited to fifty copies release which was greedily consumed before receiving a re-release via Starlight Temple Society, the band made their attention grabbing mark with the six track mini CD Ethereal Altars four years later. Released through Hammer of Hate Records, the record ignited a strong appetite for their harsh black metal sounds. Now with a darker, heavier twist to invention and sound, Craven Idol set loose Towards Eschaton, an intensive sonic predator which takes early promise to greater depths and ruinous excellence.

Released through Dark Descent Records, the album slowly stirs its breath and presence through the opening dark ambience of To 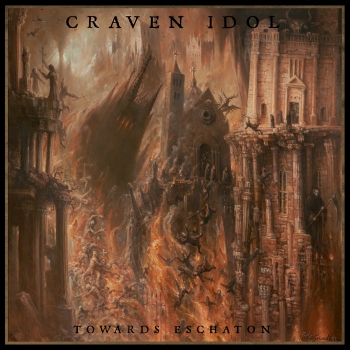 Summon Mayrion. It is a cavernous scene with vocal chants lighting the shadows before guitar and bass stretch their sonic narrative alongside crisp restrained rhythms. It is a respectful if intimidating start which takes little time in changing gear with eager riffs niggling away at the ear driven by a carnivorous rhythmic intent. The thrash core of the sound soon takes control and ignites the emotions whilst vocals squall creatively across their charge. It is a riveting encounter which explores its corners and textures with imaginative guitar exploits and a sinew loaded rhythmic incitement.

The unreserved predation continues through Sworn Upon the Styx, the track a magnetic fury of cutting rhythms and scorching riffs skirted by a sonic searing which tenderises the senses and lights up further the already awoken appetite for the album.  It is a swift corrosive assault which is immediately equalled by Golgotha Wounds, another blaze of rapacious enterprise and consuming energy. The core riff clad groove of the song is very similar to that of its predecessor to raise arguably the only real niggle, though with flames of sonic adventure adding excellent creative colour to the savagery and a wholly contagious swagger and call especially in the latter half of the track, it emerges as something individual and a major highlight in the thoroughly compelling release.

Both Craven Atonement and Codex of Seven Dooms push the limits of the album and its flavouring, the first seemingly coming in two ‘parts’, the first a brawling vicious ferocity with drums and guitars intent on punishment. A false end to the start soon makes way for the grouchy bass to crowd the ears in its gnarly sound, a delicious bestial temptation soon joined by heated flights of melodic acidity, lofty vocal harmonies, and the ever serpentine torrents of the main rapacious vocals. It is a track which needs time but earns strong positive responses across numerous takings of its harsh scenery even if falling short of pushing those passions already bred by previous songs. Its successor makes the same strength of persuasion; a sturdy and impressive offering of uncompromising and at times uncomfortable spite veined by another infectious groove, it misses sparking up the strongest emotions though the following Aura of Undeath has little resistance or trouble in that area. The melodic start is a lethally alluring introduction which is soon in league with another ferocious storm. It might be rigorously intensive and voracious but there is equally no stopping the ridiculously virulent addictive grooving and lethal hooks being bred and thrown across the song, some coated in a folk metal like spice.