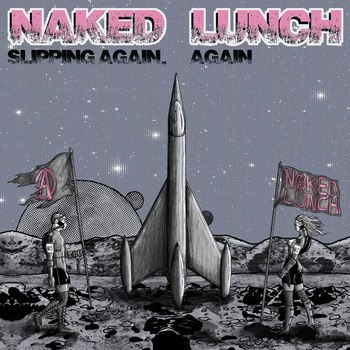 Following their return with the single Alone earlier this year, UK electric rock band Naked Lunch back up its intrigue and success with new release Slipping Again, Again. Building on its predecessor’s potent temptation the new single ups the ante with its magnetic and enthralling shadow clad electronic enterprise and electro punk seduction.

Consisting of band founder vocalist Tony Mayo with original members Mick Clark and Cliff Chapman alongside Paul Davies who was in one of the band’s earlier line-ups, and newest members Mark Irvine and Jet Noir, Naked Lunch has shown that time has enriched their snarl and imaginative depths, and they were never short on those facets when they emerged in 1979. A key influence and driving force in much of the eighties electronic movement, in sound and behind the scenes including the coming together of the important Some Bizarre album via Mute Records, the band had a difficult time with line-up instability and the like, though it did release the single Rabies and contribute the track La Femme to the aforementioned album, two iconic tracks to emerge form that period, before disbanding. Their return in 2012 at the BAS II and the haunting dark caress of comeback single Alone brought the band back to the attention and appetites of fans old and new; a hunger which the new release will only increase you suspect.

Slipping Again, Again is a reworking of the B-side Slipping Again from the 1981 single Rabies. It is a darker, more sinister and intense presence than the original but an encounter which does not lose the essence and heart of the song, instead giving it a fresher breath and stronger intrigue. The opening electronic breeze is soon grasping the spiralling bass fuelled throat of the dark magnetism immediately at work within the song. Guitars scar the air with acidic endeavour whilst the vocals of Mayo, showing age and maturity which is strikingly noticeable when playing both versions of the song side by side, bring further menace and confrontation to the track, his dark croon a provocative incitement within the contagious call of the song. With a delicious rhythmic dance ensnaring the senses and emotions further, the song is an irresistible lure which as good as the original was presents a scintillating new presence.

Hinted at on Alone, there is a stronger undeniable Frank Tovey breath to certainly the darkest edges and depths of Slipping Again, Again, a spice which only increases the temptation of the song. It all adds to a single which leaves full satisfaction and pleasure at large, and as much as the want for new material from Naked Lunch is an open wish, Slipping Again, Again fills the gap with impressive enticement and thrilling suasion.