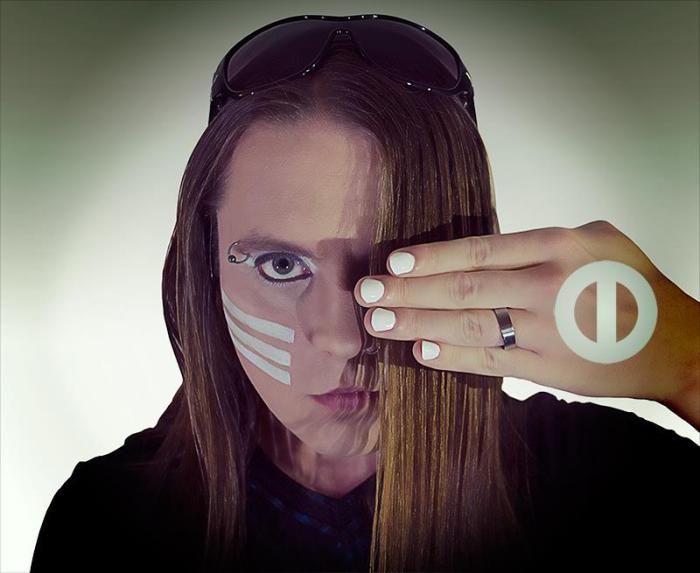 With more than a passing nod to eighties synth pop, the Rising Sky EP from US industrial/electro project IIOIOIOII is a delicious major introduction to an artist which combines evocative atmospherics with seductive melodic embraces and teasing testing invention. Consisting of four magnetic tracks which without stretching boundaries explore fresher pastures than most within a well-worn genre over the years, the Juggernaut Media released Rising Sky is an engaging and captivating proposition from a potently emerging talent in Christopher Gurney.

Hailing from Charlotte, North Carolina, Gurney with his solo project creates an absorbing web of sound and textures around strong vocals and open emotive narratives. IIOIOIOII (pronounced I.O.) takes thoughts at times back to early Mute Records days with its minimalistic breath within a feisty enterprise. The EP also occasionally triggers comparisons to the John Foxx, Modern English, and once or twice the new wave/synth pop beginnings of Ministry, yet despite that it has an individuality and character which brings those flavours into something refreshing and invigorating as well as different to most current bands. It is a mesmeric treat and the instigator to great anticipation to Gurney’s forthcoming debut album.

The AA side of Rising Sky consists of the title track and Stardust , the opener immediately laying down a seduction which breeds

attention and hunger for its persuasion. The first track ambles in with electro splinters of encouragement and a more sinew cast industrial predation which though equally inviting is wrapped in shadows and intrigue. The vocals of Gurney make a clean and open provocateur though you sense a snarl on the edge of every syllable waiting for its moment but the song’s restraint holds court throughout. The track has a reflective pace to its narrative and gait which holds both the magnetic elegance of the melodies and preying darker edge of the shadows in an easy union whilst the infection laced chorus has the virulent lure which marked the aforementioned songs of Modern English.

Next up Stardust like the first song, appears on the upcoming album Sun, and equally makes a compelling teaser for the full length. The slower evocative stroll of the track instantly weaves the pop charms of Paul Haig in with the thick ambiences of Nine Inch Nails, though the song ultimately steps mainly through the synth pop scenery of the potent landscape. It is an absorbing flight which bewitches imagination and passions within a celestial mesmerism veined by the melancholic breath of vocals and lyrical expression.

The B-side brings Could Have Been, an exclusive track to the EP, and Good Night a re-mastered version of a track first found on the projects first demo. Both continue the compelling call of the release, the first with a darker shade to its emotional hues and aural colour. It again offers essences of Trent Reznor as well as Gary Numan whilst within its vibrant stroll over the senses its suggesting blacker shadows carry a Frank Tovey touch. May be less impacting than the previous pair of songs it is still an encounter which leaves ears and thought absorbed and appetite greedier for what the release and IIOIOIOII has to offer. The closing track is a starker, darker industrial prowl; its fizzing, corrosive surface accentuated by the acrid lilt to the vocals. It is only half of the story though because like all songs it allows extremes and opposites to embrace and here Gurney weaves an OMD like melodic exploration with excellent vocal suasion to the cloud, menacing evocative heart of the track. It is a sinister thrilling conclusion to a masterful release.

If Rising Sky is any indication of the album it is going to be one of the most highly anticipated and striking synth pop/ electro industrial releases of recent times. Roll on its arrival as it is very easy to be confident that IIOIOIOII has something special in wait for us.