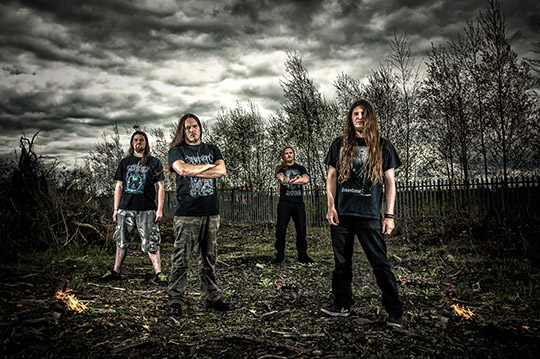 A venom fuelled rage in the ear which soon makes its way to thoughts and passions, Vile Extinction the debut album from UK thrashers Merciless Terror is a self-perpetuating sonic pestilence which leaves a certain hunger for the band and their sounds ahead whilst making one striking and synapse wasting confrontation in the now. Like so many releases around it is not stalking new fields of invention for thrash metal or preying on the senses with undiscovered inventive maliciousness but it comes with an attitude and creative freshness which sets the album apart from most of its contemporaries.

The Nottingham quartet formed in 2009 using the inspirations of the likes of Slayer, Malevolent Creation, early Sepultura, and Bolt Thrower to fire up their imagination and invention. Their sound creates a magnetic maelstrom of thrash and death metal which from its first touch takes a firm grip on attention and over numerous excursions through its vitriolic presence, as shown with Vile Extinction, ingrains itself for stronger reactions. Theirs is a sound which consumes and crushes with a torrent of riff rabidity and rhythmic destructiveness but one which is unafraid to venture through more imaginative and violently enterprising scenery than most. From their acclaimed first EP Perpetual Devastation in 2011, the band despite several line-up changes has cemented and stretched their opening recognition through their live performances which has seen Merciless Terror aurally terrorising fans across the UK, Europe, Japan, and Scandinavia whilst playing alongside bands such as Bolt Thrower, Benediction, Malevolent Creation, Bonded By Blood, Desecration, Cerebral Bore and many more, and with their Eternal Decay EP of last year. Now the foursome of vocalist Dale Linsdell, guitarist Luke Tasker, drummer Michael Brush, and bassist Dan Oldcorn take it up many levels with the Devils Clause Records released Vile Extinction.

Opening atmospheric instrumental Omnicide 00.00 sets up the premise and theme of the album, “The damnation of humanity, the 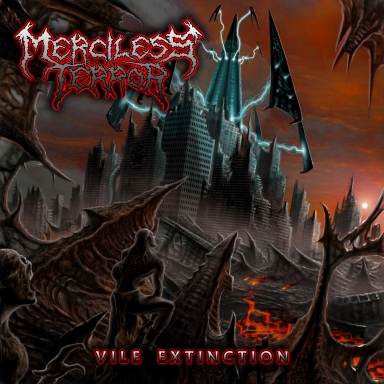 imminent fate that will consume us all and lead the remnants of civilization to fight for survival, the result of mankind’s own doing by unnecessary wars because of religion, over harvesting, over spawning like a cancerous infection upon the earth and depleting the world’s life force.” It is an ominous if slightly underwhelming menace which is soon trampled beneath the rapacious entrance of Doctrine Of Malevolence, the track and vocals roaring with guttural animosity from its opening breath. Grooved riffery scorches the air whilst the drums provide a tsunami of breath stealing intensity and violence, and with the vocal squalling buffeting the senses whilst the sonic enterprise singes synapses like a shower of hot coals, it is a scintillating assassination of the thoughts and resistance.

From the tremendous start things only become more intensive and sonically carnivorous as firstly Circle Of Contempt rampages with a bestial craving to its rhythms and the inventive assault of guitar alongside bass rabidity to be swiftly followed by the unbridled predation of Enraptured. Merciless and loaded with a hunger rhythmically and sonically that simultaneously suffocates whilst tearing strips from the senses with its acidic toxicity and virulent intensity, the track is one of many distinct pinnacles upon the album with a vocal ferocity which simply dares you to disagree.

Both the outstanding ravenously addictive Baptized In Blood and the pulverising assault of Hateful Abomination brings blood and appetite to the boil, vocals and rhythms as potently vindictive and destructive as at any point on the album drawing an instinctive rapture which is lustful in its submission. The band continues to unleash a thrilling torrent of mouthwatering corrosive thrash cored violence through the adrenaline raising Process Of Eradication where the guitars sculpt a web of riffs and grooves which triggers greed drenched ardour and the exhausting World Desolation where nagging swarming riffs and equally addictive grooves prowl and hunt the senses as the rhythms cage their prey in sinew clad insistence before a sonic fire of a solo brings the heart of the song to the fore as another sumptuous tempest of annihilation reaps havoc.

From next up Imminent Death, a sub two minute intensive brawl on the senses, the album unveils evocative instrumental Dystopic Visions which though arguably for personal tastes is positioned wrongly in the track line-up for the best effect is an enthralling colour drenched melodic slice of creative beauty. It does bring the senses time to settle and relish the upcoming closing storm Existence Denied. The track has a more restrained launch at the ears but is soon thundering through their doorways to gnaw upon the senses whilst employing and crafting constant twists and enriching flavours for what is possibly the strongest and most inventive song on the album, if not ultimately the favourite. It concludes in Vile Extinction, an album of aggressive deeply satisfying thrash metal. It is not rippling with originality or threatening new avenues for the genre but Merciless Terror instead make it a confrontation with a balance of passion and ruinous intent which is extraordinarily skilled and exciting.