Whether smouldering incandescently on the senses or burning them with blazes of blues soaked melodic rapaciousness, New Machines of the Night is one furnace of an album, a rigorous force which seizes senses and passions taking them on a goliath ride of heavyweight rock and metal fusion. Building on from their acclaimed debut, Canadians Gypsy Chief Goliath explore imagination and heart with ten slabs of scintillating and bruising rock ‘n’ roll. Classed as a stoner metal band, the Ontario sextet bring so much more to their presence and sound, the new album a magnetic fury of southern and classic rock with stoner and blues rock additives as well as melodic and heavy metal predation. It is a distinct and singular temptation to Gypsy Chief Goliath and in the Pitch Black Records released New Machines of the Night, a triumph at its invigorating potent best.

With songs sculpted by the three guitar assault and enterprise of Al the Yeti Bones, Dave Ljubanovich, and Sean Hamilton, the album is an adventurous and twisting flame of scorching invention and irresistible intrigue. Driven by the rhythmic framing and coring of drummer Adam Saitti and bassist Sean De Faria it is equally impacting with their enslaving spine of commanding persuasion and when you add the outstanding vocals of Al the Yeti Bones, who whether growling or offering a cleaner suasion coats the songs in an extra blaze of passion and energy to compliment the already fierce potency of the songs, the result is one of the best albums of this year. It does not end there though as with the harmonica sultriness of Brodie Stevenson teases the ear and boiling extra ardour, New Machines of the Night becomes an ever greater release combining themes of despair and dark shadows in a presentation which at times finds a feel good factor which has body and soul on their feet with jubilation. 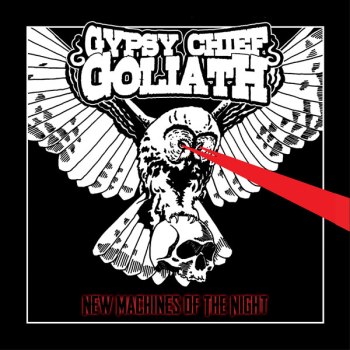 strikes, a beckoning which wraps teasingly around the ear inviting thoughts and imagination into its seductive embrace. With the throaty predacious charm of the bass the platform for the excellent vocals to parade the narrative, the track is soon a shady yet dazzling companion, grooves and a sure swagger leading submission by the hand through scenery of Pantera like provocation within a vintage Thin Lizzy bred temptation. It is a striking start and the portent of things to come, certainly with that Lynott and co lilt coming to plenty of the offerings and an overwhelming perpetual contagious presence unveiled.

The following Are you Pulling Through also takes little time in gripping the ear and emotions, its starting stroll of feisty riffs and thumping rhythms aligned to a sirenesque call from the harmonica It soon evolves into an addiction causing growl of downtuned intensive bass and guitar which forges a dark stoner Down like ravishment with doom whispers and melodic acts of delicious discord. Easily continuing the impressive stance and power of the album with the blues furnace of Dirt Meets Rust matching the early heights with its blues swamp of enterprise and adventure the album is already in control of attention and appetite. With a fuller clean delivery to the vocals merged perfectly into his scowling gruffness, Al grabs as much of the attention as the fire spawned sounds. Thoughts of Bad Company make glimpses within the earlier part of the song though its heavier Sabbath suggesting latter portion shows the rich craft and diversity within the songwriting and album.

Busting the Avenue is another impossibly infectious bait of magnetic acidic invention, guitars conjuring a web of unpredictability and smouldering enticement which with the sinews of the rhythms and carnal snarl of the bass swings in comparisons from Clutch and Corrosion of Conformity to Motorhead. From one pinnacle the album provides another, and it’s loftiest in the brilliant wonderfully persuasive form of St. Covens Tavern. The song is glorious, immediately whisking feet and passion on a mesmeric dance of again Thin Lizzy seeped imagination. But it is only a teaser as riffs suddenly show their carnivorous side, barbarous tones springing infectiously from their strings whilst the rhythms equally harden their stance. It is when the folk metal like taunting enters with a whisper of Gaelic folk reminding of Horslips that the track becomes rock manna. It is rapture breeding raptor of a song, a treat which preys on all the weaknesses of the passions to feed all their wants in a multi-flavour insatiable metallic waltz. Not only best song on New Machines of the Night, it is one of those treasures which takes classic status.

The sizzling melodic pyre that is Got no Soul makes a strong rival with its southern blues coating of the ears, harmonica and keys aural alchemy within the cast of guitar and bass passion whilst both Secret Liaison and White Owl provide a slower sultriness from their heady blues angst and incendiary spicery, the second of the pair stretching into wider southern and hard rock endeavours. Though they arguably fall below the previous charge of songs they are borne of an invention and heart bred intensity which is at its height on the album within these two compelling snares.

Completed by the grizzled heavy metal breathing Slow Leak and the riveting Fought for Death with its again esuriently charged riffs stalking the senses for rhythms and vocals to play upon, New Machines of the Night is a magnificent release which leaves thoughts and senses ignited in a mix of adoration and greedy hunger for more. Gypsy Chief Goliath create an enthralling blend of rock and metal which is unafraid to stretch its limits and coax out startling fresh spices whilst offering something almost familiar to consume, certainly it is a treat with easy access and the fullest rewards. Heavy rock album of the year? Definitely the band has crafted a powerful contender.