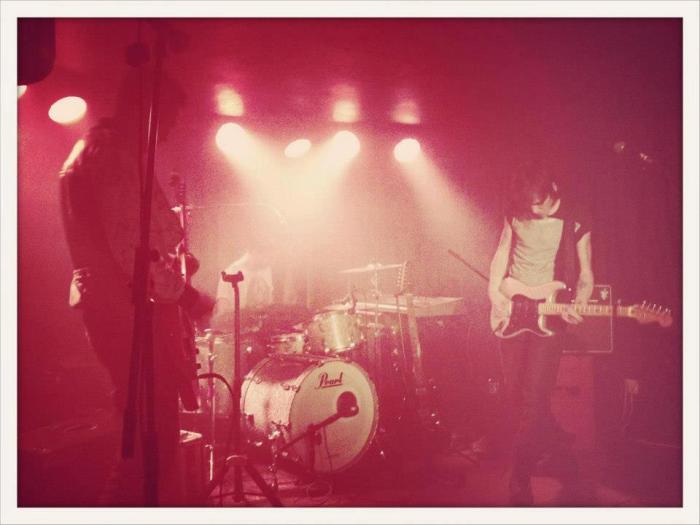 As soon as the opening track of Night Train Daydream, the debut album from UK band Maths and the Moon, began its tantalising flight of persuasion and rhythmic dance a broad grin emerged pushing back lips in lustful anticipation. The track took mere moments to ignite an intrigue and hunger which was last rife back in 1977 when the albums Pink Flag and more so Chairs Missing registered their instinctive temptation upon the passions. As the band unveil more of their psyche bred sounds across the release thoughts of those album’s creators Wire whisper very loudly across the imaginatively hued, transfixing addictive journey Maths and the Moon skilfully conjure. There is plenty more to the spellbinding sonic travelogue of course, all of which only teases and thralls the senses and imagination into its tense and dramatic escapade.

Hailing from the New Forest area of the south of England, the trio of vocalist/guitarist Andy Fielder, drummer Luke Taplin, and bassist Matt Hirst formed Maths and the Moon in 2009 and made their live debut alongside legendary Can frontman Damo Suzuki the following year. Night Train Daydream and its startling contents were recorded and produced by the band across 2009 through to 2012, a journey of time and internal venture for the release which finally has its departure into the thoughts and you can only suspect hearts of the country September 30th. Already preceded by the single Old Days/New Daze which was released as  free download invitation, the album provides one of the most unexpected and thoroughly, greedily consumable treats of the year.

The provocative intensive dark charms of FFWD (Fly From Danger) opens up the dramatically imposing and scenic expanse of the album. 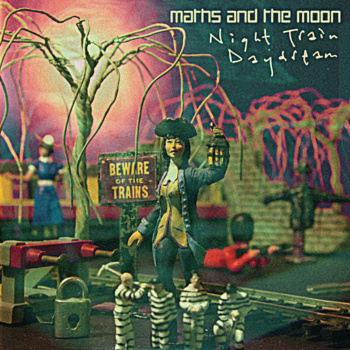 It is a riveting first stop on the imaginative travelogue of sound and invention, a brewing rhythmic virulence emerging from a sonic mist to mark its first call. A cavernous breath calls from within that evocative chilled ambience as restrained whispered vocals tempt and coax in the passions further. Submission to the deliciously claustrophobic toxic fumes is unavoidable especially as voice and rhythms darken their presence and intensity to crowd and incite the imagination and emotions further. It is a staggering entrance of repetitive discordance which strongly pushes forth that Wire reference, which is confirmed and cemented in thoughts by the following On A Knife Edge. Another bait of rhythms beckons whilst a minimalistic bass and guitar call alongside the again reserved yet expressive spoken vocals seduces with ridiculous ease. Once the narrative sends the delivery of Fielder into a more mania bred uncertainty there is a sense of The Mae Shi to the song which merges with post punk chills of again Wire for a captivating almost nightmarish wonder.

The stunning start is next taken into a schizophrenic waltz of sonic and emotional discordance in Hekyll And Hyde which challenges its own psyche and the imagination of the listener; dark and light, peace and mania all conflicting yet seamlessly united provocateurs which explores inner turmoil whether emotional or physical. The great thing about album and songs is you can interpret things into personal potent landscapes as easily as sensing the band’s intent, their aural descripts guides without dictating which ensures each continued trip with the album is unique.

It’s Okay To Be Afraid continues the incredibly addictive and immense presence of the album, the track an initial caress of melodic warmth and tender comfort sculpted by sensitive guitar melodies and bass pawing which embrace the shoegaze glaze of the chorus, the mesmeric tone adding an extra reassuring kiss within the coarser shadows of the track. Another magnetic enticement which recalls the likes of House Of Love and My Bloody Valentine in many ways, it leads the senses into the mesmeric instrumental Recurring Dream Number 13. The chilling verging on sinister atmospheric piece is the continuation of the previous narrative of dreams and sleep within its predecessor, the track a hypnotic meditative embrace with imposing edges.  The outstanding Old Days/New Daze is the awakening from this track, its busy and feisty bass stroll and rhythmic rounding up of the senses and thoughts a forceful slightly deceptive lead into new fearful yet rewarding if faced, adventures. The guitars carve a sonic storm of riveting enticement across the sky of the song whilst the drum and bass bait make a perpetually enslaving inducement alongside the monotone but engaging vocals, again so reminiscence of Wire and the early solo work of Colin Newman.

Through the likes of the air blistering menacing WWYB (The Demons March), the acoustic and starkly elegant Anxious Cats, a song which launches upon a larger intensively dramatic stance midway, and the deceptively hypnotic Monochrome which finds an invention and roving stance that is pure post punk toxicity, the album takes the passions and imagination through strikingly and intensely coloured emotive explorations which stretch not only thoughts but the boundaries of the songwriting and album.

From the slightly industrialised instrumental Lolocomo, Night Train Daydream heads to the completion of its absorbing dark ride with firstly the exceptional Light At The 11th Hour, the track a fiery garage punk infused slice of rewarding fun for the traverse of so many exciting dark stops on the journey, and lastly the electronically propelled Polychrome. The song is a scuzz driven dance of bright sonic lights and heart spawned celebration, though as now expected it does not come without dark corners and shadowed distractions to ignite even greater rapture and intrigue.

Night Train Daydream is a brilliant debut, a mesh of droning seduction, fire drenched corrupted melodies, and uncompromising imagination. Maths And The Moon almost make you believe in musical reincarnation because though they are not the new Wire they are surely the kings of their legacy.