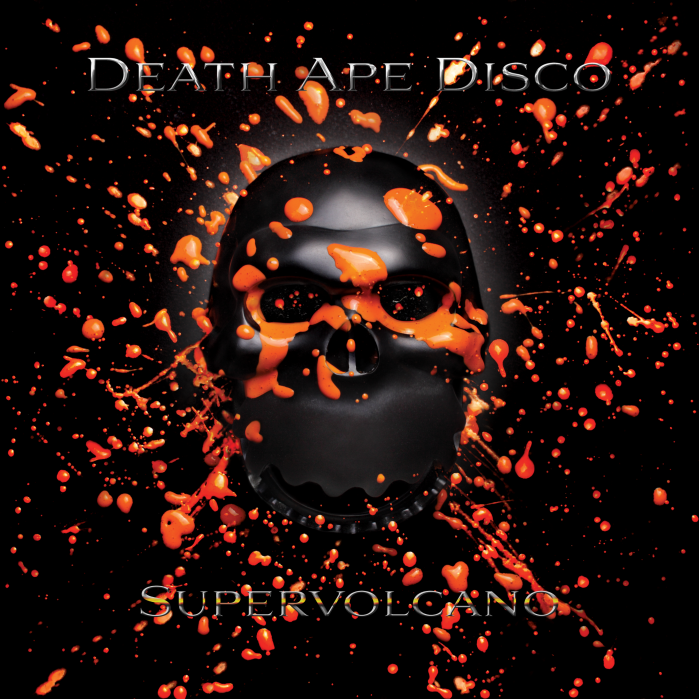 There is no rest for the wicked the saying goes but with UK rockers Death Ape Disco there is rest for any one such the lure and contagion of their heavy riff laden sounds and insatiable energy. With their debut album Supervolcano as evidence it is easy to declare the Brighton quintet as an emerging riot poised to rough and stir up the country, but the real proof is in the seven bruising encounters which makes up its impressive confrontation, songs which ignite body and emotions with raucous ease.

With the line-up of vocalist Robert Rainford, guitarist/vocalist Kit Brice, guitarist Jamie Boulstridge, bassist Sam Curtis, and drummer Harry Lehane in place from 2011, Death Ape Disco has earned a formidable reputation across the south of England and further afield. Their fusion of heavy metal, hard rock, and grunge with further elements of alternative and stoner rock, as well as a spice of punk at times has bred a loyal and eager fanbase in their tow but you can only suspect that Supervolcano will be the trigger to greater things.

The album stomps down its mark from the first rhythms and notes of opener Kingdom Of Others, drums and riffs marking their territory with accomplished infectiousness before the excellent gruff tones of Rainford add their strong persuasion. The song is an instantly welcoming and inciting riot of prime rock ‘n’ roll, heavy thumping rhythms and urgent riffs accompanied by fiery melodic enterprise from the guitars and a throaty brooding bass prowl. As strong vocal harmonies and an even more vigorous presence emerges within the track it becomes a truly scintillating introduction to release and band. It is not debatably drenched in originality but as a compelling and invigorating protagonist it is an undoubted powerhouse of a starter.

The following Suffocate also takes no time in showing its boisterous sinews with its initial attack entwined in addictive grooves and again rigorous riffing which make addiction inescapable. Punkish in its antagonism, grungy in its melodic temptation, the song is an insatiable fire of creative energy and ruthless persuasion with only its briefness worth a moan, though it means we are sooner confronted with the excellent 10,000 Years. A metal carved intensive groove soon leads the riffs into a mighty enslavement of the passions by the third song, the rhythms of Lehane leaving the senses blissfully punch drunk such their resonance and force. Just when you think the track is going to rip out the jugular the song slips into a hard rock anthemic tempting for its chorus which you cannot resist adding to. With numerous twists into dramatically thrilling and incendiary asides the track is an impossibly contagious grapple sounding like a mix of UK bands Supercharger and Fuckshovel.

Both Grinding Down The Sun and Eclipse take a more restrained approach to the listener though neither are lacking intensity or heavily breathing imagination. The first has a heart of hard rock with vocals adding a further Furyon/Gruntruck essence to the stylish and inventively sculpted venture whilst its successor steps into a more ballad like territory with plenty of Stone Temple Pilots like passion to the melodic flames licking at the passions throughout. A smouldering treat of a song which burns and lingers more and more through numerous passages in its evocative hands, the track ensures that the strength of the songwriting and it’s in many ways understated diversity finds more open clarity.

The song Death Ape Disco like earlier tracks has a mischief which enriches its inflamed hues, the song another virulent slice of invention and skilled devilry. There is a mix of Soundgarden and Alice In Chains to its irresistible inventive toxicity yet equally has a unique charm and teasing which brands it as belonging to the south coast five.

Ending with Mars, a final slab of instinctively forceful and weighty rock ‘n’ roll, Supervolcano is a blistering beckoning from a band which is destined to major things on the evidence of this release. With more uniqueness sure to evolve ahead watch out for Death Ape Disco, they take no prisoners or take no for an answer.

Supervolcano is available to buy here http://deathapedisco.bandcamp.com/ as a buy now name your price.