The Devilzwork – A Dead Horse 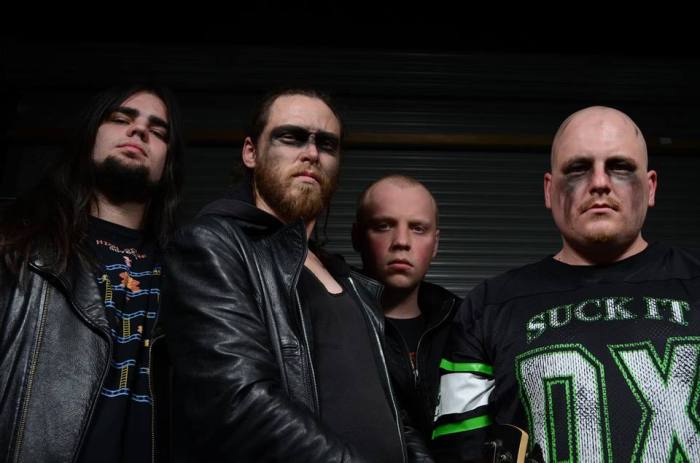 Australian industrial metallers The Devilzwork set senses and fears cowering last year with their album Floodlights, a carnivorous sonic pestilence which gnawed and seduced the emotions with lethal  yet compelling severity. Now the band returns with its successor A Dead Horse and another tempest of virulent devastation hell bent on consuming and reshaping the synapses.

Hailing from Australia’s Capital Region, the 2009 formed quartet of guitarist Whiskey (also in Chud), vocalist/bassist Tobias, guitarist Kvlt and drummer Postal, has built an incendiary reputation across the regions of Melbourne and the Australian Capital Territory with their impressive live shows which has seen them stare stages with the likes of Voices of Masada, MzAnnThropik, Tim “The Ripper” Owens, and Mnemic. The self-produced demo Bad Moon Rise equally sparked concentrated attention though it was the eight track release Floodlights which stretched the bands presence much further afield as certainly an online presence and temptation. Now A Dead Horse is primed to accelerate that growing awareness. You suspect such its harsh and caustic devilry that the release will send as many running for the hills as finding those unable to resist its scourge driven charms, but if unbridled spite coursing corrosion is your idea of a treat than The Devilzwork has a nasty rewarding one lying in wait.

seeded malevolence. It instantly has the hairs on flesh wilting before its vicious blaze of noise rock/industrial ferocity with the great duel vocal attack driving the aurally scurrilous fire of sound to greater depths. From the first track alone you can openly see the evolution in the songwriting and intent of the band. Whereas Floodlights was one carnally bred lime pit of intensity and noise soaked irreverence its successor has a more defined purpose and invention to its claws. A strong spicery of metal and rock adds further potency and imagination to the song and as it emerges, A Dead Horse as a whole.

The outstanding Kalifornia comes up next, its confident swagger and teasing wantonness leaving a tasty flavour of horror rock to the Ministry sounding torch of sonic animosity. A twisting feverish taunting on the senses and imagination, the track despite its too soon coming departure is the first of the major highlights on the album and ultimately the best track.

The Godflesh/Marilyn Manson lilted Prick, a track with labour to its attack but captures the passions at a glance without any resistance, and the more electro venomous Big Man follow to continue the strong start of the release if without quite matching their predecessor whilst the insidious corruption that is Hardware suffocates and invigorates simultaneously to ignite the mind and emotions. Bringing an acidic blistering groove which would rest easily in a Kyuss/Queens Of The Stone Age rage, the track pushes the diversity of the album yet again. Admittedly some work is needed to unveil some of the unique rewards to be found within the songs beneath the surface severity and taking that plunge head first only rewards all the more. The previous album was debatably short on individuality between songs in hindsight but there is certainly no issue with A Dead Horse as each track reveals given close attention.

From the pernicious Corrosive, a more than decent track which is as its title suggests, and the dark intensive exploration Vast, the album reaches another pinnacle with Insect. Thumping rhythms open up a cage of virulent toxicity, a wash of sonic itching wrapping the skin whilst vocals and restrained electronics rattle the bars and another epidemically addictive groove frequents senses and passions. The track will have you scratching the brain and emotions for hours after whilst the short burst of instrumental after its departure soothes the sore need.

Enthralling expels a raucous heavy rock fury, vocally and melodically, within another breath and atmosphere of poisonous sonic mercury to again push the envelope of invention whilst Virus Installer is just a rapacious pathogen of angry and malicious noise honed into a riveting protagonist. Both leave the senses exhausted and wondering what hit them yet thoughts alive with interpretation of their magnetic intensity.

Concluded by the tender, well in comparison to what came before, Push Yourself Around and the sinister soundscape Desolate, the album leaves a hunger for much more. The first of the final pair has a scintillating toxic swing to its pestilential might whilst the closer is just an evocative passage of sound and menace which leaves the mind exploring its own black corners. Both add further absorbing ventures to A Dead Horse, an album which shows no mercy but strikes with an intelligently sculpted persuasion offering depths of melodically spawned venom. With only the shortness of some of the most enthralling violations a niggle, the album is an impressive leap forward for The Devilzwork and a must investigation for all fans of the likes of Ministry, Godflesh, Rammstein, Marilyn Mansion and those of industrial and death metal… though are they brave enough though?

Like Loading...
‹ Religion Of Tomorrow – In Theory
The Kings Of Outer Space – How To Fly A Rocket ›